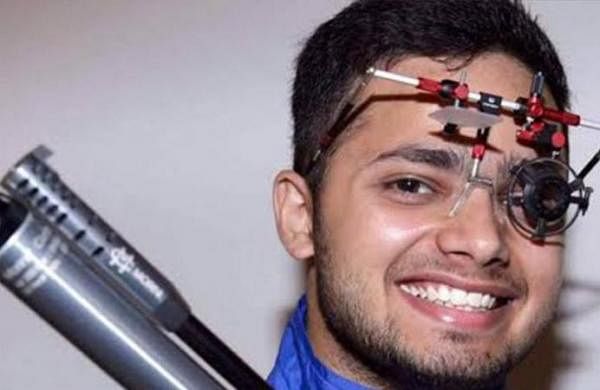 BENGALURU: India’s Manish Narwal was looked upon as a serious medal contender at the Tokyo Paralympics. He had some big medal-winning performances in the last four to five years. But, on Tuesday, he was disappointed and angry with himself as he finished seventh in the men’s 10m air pistol SH1. After missing out in his pet event, Narwal knew that the mixed 50m pistol SH1 was his last shot at a podium finish, and he delivered gold with a Paralympic record of 218.2 on Saturday.

However, the young boy from Ballabhgarh, Haryana, who has an impairment in his right hand, did not pick up the art of shooting straight away. Initially, he loved outdoor sports and wanted to become a football player, but that didn’t really materialise. It was around 2016 when his father was informed about a shooting event in a nearby place, and he was taken to the venue. The youngster fell in love with the sport thereon, and rigorous training and hard work led him to Tokyo, where he has brought laurels to the country.

But, this gold medal means much more. Coach JP Nautiyal, like other coaches associated with him over the years, was waiting for this day. And when it happened, Nautiyal and Narwal were involved in an embrace and they had tears of joy in their eyes. Nautiyal further opened up on how he helped the shooter prepare mentally in the last few days to avoid another upset.

“I knew about his potential. Heading into this (mixed 50m pistol SH1) event, I wanted him to have that belief and faith. Shooting is a mental sport. In the last two days here, we made him relax, took him out for a walk around the village and cracked a few jokes here and there to keep him at ease,” Nautiyal told this daily from Tokyo. Also, we gave him that much-needed confidence, talking about his big achievements in the past and told him he can do it here also. And he won gold for India today.”

Nautiyal’s joy did not end there as Singhraj Adhana secured silver with 216.7 in the same event, helping India finish one-two. In fact, Singhraj, who built a shooting range at his home to train during Covid, has been on top of his game with the shooter winning bronze in the 10m air pistol SH1 a few days ago. Both shooters’ feats are special considering Singhraj, 39, and Narwal, 19, got into shooting four and five years ago only. It is also their first Paralympics.

“It (one-two finish) is a big achievement. But I have to say in a sport like shooting, if you put in that hard work and have that skill, four or five years is quite a good period to reach at this stage. Actually, India are very good at shooting and have won a number of medals. Talking about these two shooters, Singhraj is very disciplined and his approach is systematic. Manish, on the other hand, is young, kind of bubbly, but both are quality shooters. I was sure they would win medals,” added Nautiyal.

The performance of the Indian shooters in this edition has been brilliant, collecting five medals, including two gold. The medal count could further increase on Sunday, the final day of the Paralympics, with the in-form Avani Lekhara, who has gold and bronze already against her name, keen to complete a hat-trick. Siddhartha Babu and Deepak will also compete in the event.

Denial of responsibility! TechiLive.in is an automatic aggregator around the global media. All the content are available free on Internet. We have just arranged it in one platform for educational purpose only. In each content, the hyperlink to the primary source is specified. All trademarks belong to their rightful owners, all materials to their authors. If you are the owner of the content and do not want us to publish your materials on our website, please contact us by email – [email protected]. The content will be deleted within 24 hours.
Loading...
continuesgoldJP NautiyalManishManish NarwalNarwalnews updateParalympic medal
Share