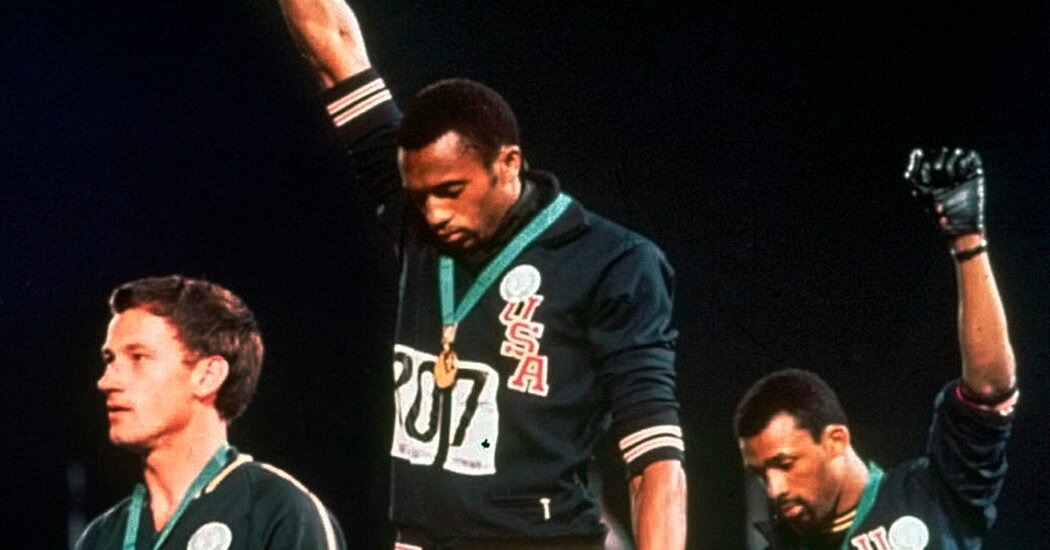 When the American sprinters Tommie Smith and John Carlos raised their fists on the medal stand at the Mexico City Games to protest the oppression of Black Americans, they gave voice to generations of the athletes eager to speak their minds, even as the International Olympic Committee and athletic federations try to curtail what they consider political demonstrations.

While the U.S.O.P.C. said in December that it will no longer penalize athletes who protest, the I.O.C. reaffirmed that protests during Olympic events or the medal stand are prohibited. That rule will be tested when the Tokyo Games open on Friday, Smith said in a recent interview, because athletes everywhere have been awakened in the year since the killing of George Floyd in Minneapolis.

Women’s soccer players for Britain, Chile, Sweden and the United States knelt before their games on Wednesday, which fell under a relaxed I.O.C. rule that allows for demonstrations before the start of competition.

In a wide-ranging discussion following the release of “With Drawn Arms,” a documentary about his life, Smith said it is fruitless for the I.O.C. to try to muzzle athletes.

This interview has been condensed and lightly edited for clarity.

Are you encouraged by the U.S.O.P.C.’s stance on athlete protests?

Smith: We see what’s happening in the Olympic Games right now from conversations with kids trying to do something which hasn’t been done before. It’s going to happen. That’s how we’re going to move forward. I certainly believe that it’s a thought in process, a progression.

Why does the I.O.C. still oppose protesting on the medal podium?

For the I.O.C., the “I” is very important. That’s the international. They’re trying very desperately to keep the cap where they can be in the control. They think that if they lose control, everything is going to go haywire. In most of my speeches, I say that when something is going haywire, it needs to be rewired. That rewiring isn’t what they want. They want their conventional efforts that they have right now moving forward, controlling all nations.

Do you think that their policies will deter athletes from expressing themselves in Tokyo, Beijing or elsewhere?

It’s a rational thought that there’s going to be some type of change. I think within the next three weeks, we’re going to see some change in something. I don’t know from who. That’s why the future is so important.

Athletes have knelt, raised their fists and, most recently, Gwen Berry, the American hammer thrower, turned away from the flag to convey a message. Do you believe one gesture is more powerful than another?

Well, I never threw a rock and hid my hand. Yes, there are differences in different ways that you protest about certain issues. I do believe that some are different than others. Mine was silent. I called it a silent protest or a silent gesture. Gwen, the W.N.B.A., they are outstanding. It is very challenging.

Have you spoken to any members of the U.S. Olympic team?

I’ve talked to one athlete or two, but not directed him in a position. I give them ideas of the brain and mind over matter and concentration and the science of speed. One athlete I’m especially interested in is the fastest human in the 200 meters in America right now. He has a coach, he has a family, a beautiful family, and he has a brother who’s right there with him. That is the only one that I have contacted to say hello because I don’t want to get in the way. Even then when things happen because they said something, they’re the ones who have to stand up and defend what they believe in, defend the rights which they think have been taken away.

Denial of responsibility! TechiLive.in is an automatic aggregator around the global media. All the content are available free on Internet. We have just arranged it in one platform for educational purpose only. In each content, the hyperlink to the primary source is specified. All trademarks belong to their rightful owners, all materials to their authors. If you are the owner of the content and do not want us to publish your materials on our website, please contact us by email – [email protected]. The content will be deleted within 24 hours.
news updateOlympicsProtestsSmithsports newssports updateTalkstechi live
0
Share