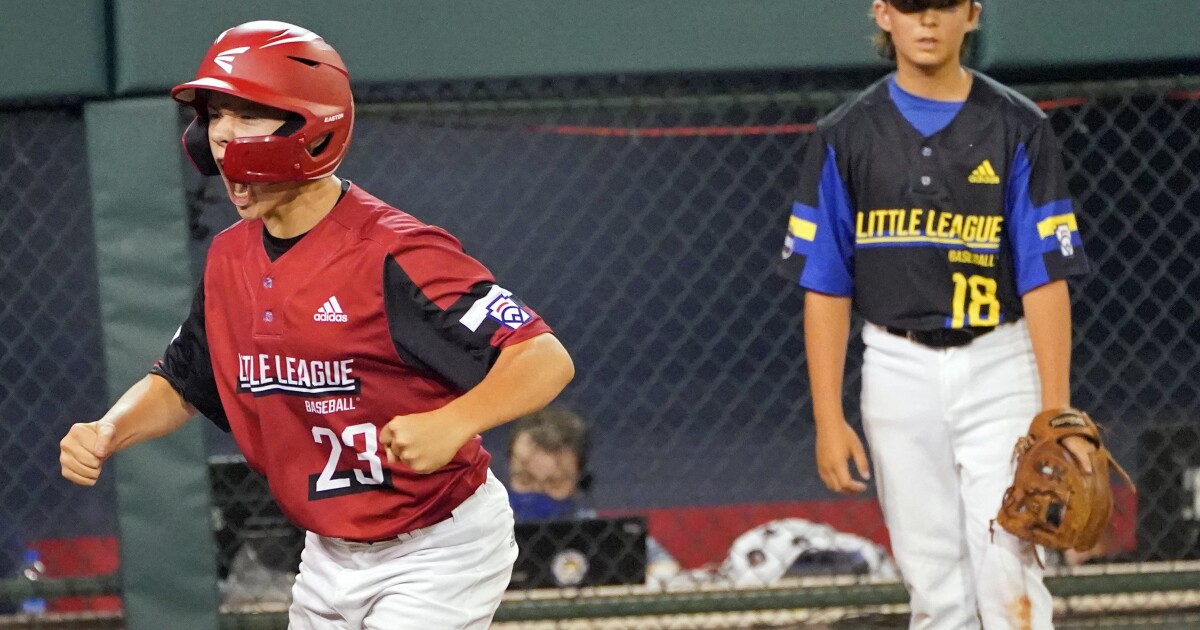 They all dreamed of making it here. But they didn’t want to think about how it would feel once it ended.

After keeping their season alive so many times before, the so-called “Cardiac Kids” of the Torrance Little League All-Star team were finally eliminated on Thursday night, exiting the Little League Baseball World Series with a 4-2 defeat to Hamilton, Ohio.

Torrance led 2-0 through three innings, and even after falling behind had the potential winning run at the plate in the bottom of the sixth.

But this time, the magic ran out. After spending the better part of two months together, advancing through three qualification tournaments to become the first Los Angeles County team since 1994 to make it to Williamsport, they couldn’t pull off another comeback.

And when it was all over, they stepped out under the lights of Lamade Stadium to salute their opponent, tip their caps to their family, and soak up one last scene from a storybook summer.

“It was a great run,” said coach Javier Chavez, who gathered his 12-and-under team around him before they walked off the field. “It was hard to look them in the eye, only because there was so much emotion going on.”

Win-or-go-home games were nothing new for Torrance. They had to survive seven elimination games in their state tournament, then another three at the West Regional.

But Thursday was their first loser bracket game in Williamsport, after they won in the opening two rounds by a combined 19-2 before getting no-hit in a loss on Wednesday. With a victory, they would have advanced to their bracket final on Saturday. And midway through the game, they seemed on track to get there.

After stranding runners in scoring position in the first and second innings, Torrance finally broke through with two runs in the bottom of the third on RBI singles from Levi Cornett and Kaishu Harrison.

Then in the top of the fourth, reliever Dominic Golia escaped a bases-loaded, no-out jam and allowing only one run, coolly strolling off the mound as the team’s family section exploded in front of him.

However, the next half-inning produced a turning point. Instead of extending its lead, Torrance squandered its own bases-loaded opportunity after Ohio second baseman Gage Maggard made a diving play on an inning-ending ground out.

In the fifth, Ohio immediately made Torrance pay.

After Golia issued a couple of walks, Ohio’s Chance Retherford lined a go-ahead two-run triple just inside the right-field line. He later scored to make it 4-2, sending Golia off the mound wiping his eyes from beneath his cap.

The cruel side of a nationally televised event had struck Torrance. In the span of five minutes, its fate had changed completely.

“You could tell they were a little shaken up,” Chavez said.

Still, Torrance had come back from deeper holes earlier this summer. And in its final trip to plate in the sixth inning, Torrance orchestrated a last-ditch threat.

With one out, Isaac Mora poked a single through the infield. Two batters later, Grant Hays hammered a line drive into center to put runners on the corners.

Gibson Turner, one of Torrance’s star players all season, came to the plate representing the game-winning run and his team’s last hope. He swung at the first pitch and lifted a deep drive to center field, putting an initial charge through the crowd.

But the ball died short of the warning track, dropping into the glove of the center fielder for the final out.

The Ohio players poured out of the dugout, celebrating near the third base bag. On the other side of the infield, Torrance players walked slowly onto the field, waving to their families — from whom they’ve been separated for the last three weeks under Little League’s bubble format to protect against COVID-19 — as a team one more time.

In the immediate aftermath of the defeat, Chavez searched for the right words to sum up all his team had accomplished this summer.

Before this year, Torrance had never sent an All-Star squad to regionals, much less Williamsport.

They made this run in the wake of a COVID-19 pandemic that forced last year’s Little League World Series to be canceled, and led to a smaller than usual player pool for Torrance at the start of the campaign.

And of course, there were all those previous elimination triumphs, the obstacle-laden path they navigated to be one of the last six teams in the country standing.

“I felt I grew in so many levels, not just baseball,” Chavez said. “When you spend so much time with a team, and all you know is baseball, and all you know are the kids — you build a bond. You start finishing each other’s sentences. You start knowing what the other ones are doing or where they’re at or how they’re going to respond.

“Walking with them through this journey, I’ll never forget it my entire life.”

In the shadows of a tunnel leading out of Lamade Stadium to vans that shuttled the team back to its barracks for the last time, Torrance family members and friends huddled nearby, shouting out to their boys as they prepared to leave Williamsport and return to their normal lives.

“Nothing to be ashamed of,” another called out.

Before they pulled away, one other sentiment was echoed several times.

Denial of responsibility! TechiLive.in is an automatic aggregator around the global media. All the content are available free on Internet. We have just arranged it in one platform for educational purpose only. In each content, the hyperlink to the primary source is specified. All trademarks belong to their rightful owners, all materials to their authors. If you are the owner of the content and do not want us to publish your materials on our website, please contact us by email – [email protected]. The content will be deleted within 24 hours.
LeagueLossnews updateOhioRunseriessports newssports update
Share