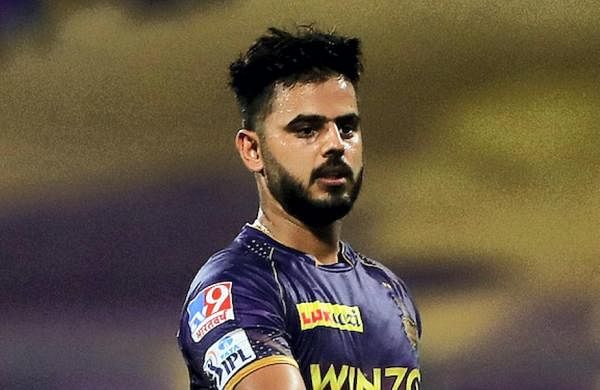 MUMBAI: Kolkata Knight Riders batter Nitish Rana said having plied his trade in the IPL for considerable number of years, he is now trying to adapt to the role of an anchor, which was on full display against Rajasthan Royals here.

Rana, who hit an unbeaten 48, anchored the 153-run chase on a slow-paced Wankhede wicket to help KKR beat RR by seven wickets on Monday and snap their five-match losing streak.

“A lot of things depend on factors like opponent team and what total we are chasing and what number I am batting. I have been playing IPL for seven-eight years now and trying to perform the anchor or main player. I have been successful till date and hope that in the coming matches, I play such innings for the team,” Rana said at the virtual post-match press conference.

“…the role which the team is giving me according to match situation, I am trying to bat like that. Today, I had to play the anchor’s role. I knew that if I was there at one end, then things would become easy for us with players like Rinku, Andre Russell, and Anukul (Roy) waiting in the wings. So we had depth in batting but my role was to play from one end so that we could easily chase the target,” he added.

Rana also heaped praise on young Rinku Singh, who played an unbeaten 42-run cameo of 23 balls. He said his efforts to calm down a “hyper” Rinku yielded rich dividend for KKR. “I am very happy for the way he (Rinku) batted as I know him for 5-6 years and he has worked a lot, scored in every domestic season. The way he was batting, I knew he would do something big for our team once he gets the chance,” said Rana.

“When he walked in to bat, I tried to calm him as I know he is a little-hyper and told him (if) we bat, we can finish the game in any over. I am very happy for him and hopefully he will continue batting the same way for KKR and himself,” he added.

Rana also took a dig at their critics, who have questioned KKR’s team selection. “In our eyes we have got the best XI, probably the outsiders feel that we haven’t. We comfortably won without any big player (making an impact). If we win like this, any eleven is best,” he concluded.

Rajasthan Royals Director of Cricket Kumara Sangakkara rued the batter’s inability to put on big scores behind the team’s defeat in the last two games. “Two scratchy games and we didn’t get enough runs on the board. In Mumbai (Indians games) we were 130 with four overs to go, should have been 170. Today we just got little-bit bogged down in the middle,” he said.

“Sanju (Samson) batted well and Hetty (Shimron Hetymer) at the back end got us some respectability. The bowlers in both the games did their utmost to take into the last over, but a lot to improve on and a lot to think about as we go into that next game,” he added.

Denial of responsibility! TechiLive.in is an automatic aggregator around the global media. All the content are available free on Internet. We have just arranged it in one platform for educational purpose only. In each content, the hyperlink to the primary source is specified. All trademarks belong to their rightful owners, all materials to their authors. If you are the owner of the content and do not want us to publish your materials on our website, please contact us by email – [email protected]. The content will be deleted within 24 hours.
anchorsbatteriplIPL 15ipl 2022IPL LiveIPL updatesKKR VS RR
Share

Charge your iPhone, Apple Watch, and AirPods with this $50 Catch-All tray

The Lady Tigers’ Season Comes to an End With Split on…