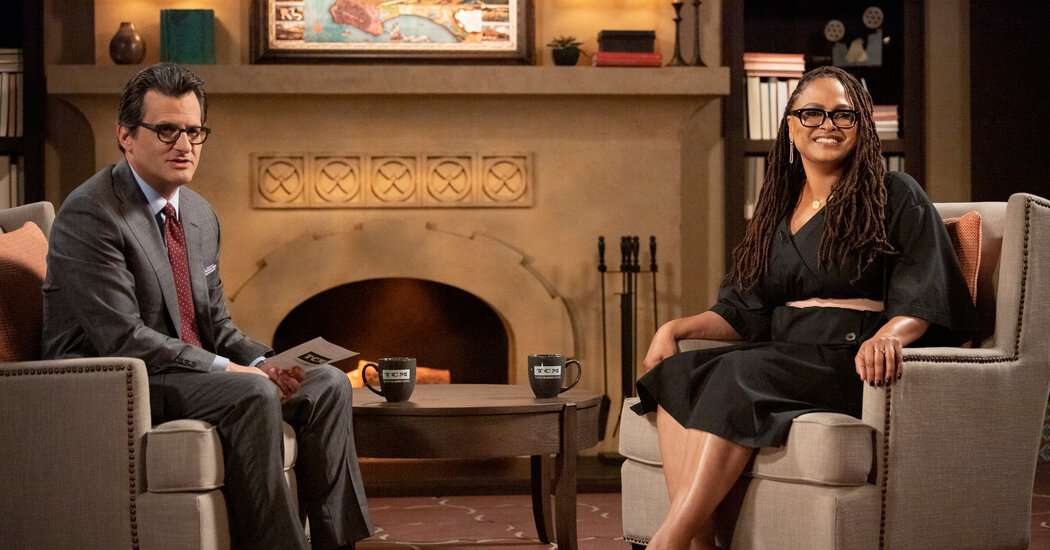 Turner Classic Movies Is Changing. And Trying to Stay the Same.

Sometimes even a classic needs a bit of retouching.

Starting Wednesday, Turner Classic Movies is getting a face-lift. TCM, the cable-television home to countless vintage films will have a colorful new aesthetic in its on-air promotions, new openings for shows like “The Essentials” and “Noir Alley,” new sets for hosts like Ben Mankiewicz, a new logo and new branding that emphasizes the interplay between past and present-day cinema history.

And as Mankiewicz said recently, he is already preparing himself for how these changes will be received.

TCM’s executives and talent say that its overall mission will remain the same, and that this latest refresh is an aesthetic one, meant to help the cable channel stay relevant and reach a wider audience.

While it preserves and celebrates the past, TCM is thinking about its future, too. In an era that is increasingly dominated by streaming television, how can it continue to thrive as a linear cable channel while bringing its experience to other platforms? As a property of WarnerMedia, how can TCM contribute to that company’s own HBO Max streaming service without getting swallowed up by it?

At the same time, TCM does not want to alienate its existing audience — one that values its curation of films and its commentary on them. And as TCM rolls out its rebranding, it recognizes that even cosmetic alterations can look like the harbingers of fundamental shifts in philosophy.

As Mankiewicz explained, “I want to make it so that fans will understand that what they care about is not changing. But they are still going to have a small heart attack.”

Pola Changnon, a veteran TCM executive who became its general manager in January 2020, said that she and her colleagues had been contemplating a refresh of the channel for several months.

Looking back over the 27-year history of TCM, Changnon said the channel has always satisfied a core audience “that really just wants their Doris Day movies, that expected, classic catalog. But then there are folks who are more adventurous, who want to learn and engage in a different way.”

To that end, TCM has already started adding programming like “Reframed,” a series that re-examines movies like “The Jazz Singer,” “Gone With the Wind” and “Breakfast at Tiffany’s,” which have been criticized for their outdated treatments of race, gender and sexuality.

“You can still enjoy the film, but you’re acknowledging some of the things that, for contemporary eyes, can be difficult,” Changnon said. “We don’t want to cancel these films — we’d rather engage in conversation around them.”

The redesign introduced Wednesday features a bright palette meant to evoke the Technicolor logo. The TCM logo has a new font and, onscreen, an animated letter C that takes on various forms and sizes before resting at a shape that resembles a camera lens or film running through a projector.

A new ad campaign and a new tagline, “Where Then Meets Now,” will emphasize the connections TCM seeks to make with its programming, targeting cinephiles while extending an invitation to neophytes. Visitors to this month’s Telluride Film Festival, for example, will be greeted with banners bearing artwork that juxtaposes scenes from the George Cukor and Bradley Cooper remakes of “A Star Is Born,” or the John Wayne and Jeff Bridges incarnations of Rooster Cogburn from their versions of “True Grit.”

Tricia Melton, who is chief marketing officer of Warner Bros.’ global kids, young adults and classics division, said these changes at TCM were intended to emphasize “how the past can inform the present.”

While other channels and streaming sites can offer large film libraries, Melton said TCM was distinguished by “the ability to bring curation and context to these films — why they still resonate today, why they matter.”

“You don’t want a brand to ever be stagnant,” Melton said. “We have to move with culture, too.”

That cultural shift has been accelerated by the emergence of HBO Max, which had its debut in May 2020 and has since become a crucial staging ground for WarnerMedia’s movies and TV programs. On that site, TCM exists as just one of several hubs with a library of several hundred films. (The channel also has its own on-demand service, Watch TCM, that offers livestreaming and a portion of its catalog.)

Tom Ascheim, the president of Warner Bros.’ global kids, young adults and classics division, said that it was simply a reality of the current media environment that TCM would have to develop a streaming presence.

“To claim one of the most obvious sentences about our industry, more people are streaming than they used to,” he said. “For us to ignore that would be pretty silly.”

While he and his colleagues explore new ways for TCM to make use of HBO Max, Ascheim pointed to this year’s TCM Classic Film Festival — which was held in May as a virtual event taking place entirely on TCM and HBO Max — as proof that the two platforms can coexist and complement each other.

“We have a chance to make the power of curation much louder on a streaming service than some of our competitors, who compete on volume and algorithm,” he said. “TV by the ton is not that great. TV that’s carefully picked for me, by somebody I really trust, that feels good all day long.”

Ascheim said that expanding the channel’s streaming presence was not a sign that TCM was giving up on traditional cable TV or its own underlying values.

“There’s no intention to turn TCM into Cinemax, just like a bunch of movies from the current moment,” he said. “As long as linear is there, we’ll be there with pride.”

Still, even the suggestion of changes at TCM is enough to prompt skepticism from its viewers. When a short teaser video was posted to Twitter last week, showing Mankiewicz painting his own set, it elicited a series of quizzical comments. Sam Adams, a senior editor at Slate, wrote in a tweet: “assuming this means a change to ‘HBO Classic’ or some such”

But TCM staffers said this kind of second-guessing was all part of the process. Mankiewicz said he experienced a similar scrutiny when he joined TCM in 2003 as an ongoing host — a role that, up until that time, had been held only by the network’s signature personality, Robert Osborne.

“For not a month or two months but for years, there was a feeling of, Who the hell’s this guy?” Mankiewicz recalled. “Only after two or three years, they were like, This guy talks about the movies, it’s OK, we’re all right.”

All that was being updated, Mankiewicz said, was the network’s outward look and logo, his set and maybe his clothing. “My wardrobe probably will change a small amount,” he said. “I’m not coming out wearing shorts. That’s not going to happen.”

While technology and platforms will continue to evolve, Mankiewicz said, what will remain the same is TCM’s goal to bring its movies and commentary to all of these places.

“What you experience at TCM, I’m very confident you will be able to experience in 25 years,” he said. “I’m not smart enough to say exactly the manner in which it’s going to get delivered to you. But will you be watching curated movies with a host introduction where the movies are put in context? And will everything on the channel look fantastic the way it does now? Yes, that I am 100 percent certain of.”

Loading...
Denial of responsibility! TechiLive.in is an automatic aggregator around the global media. All the content are available free on Internet. We have just arranged it in one platform for educational purpose only. In each content, the hyperlink to the primary source is specified. All trademarks belong to their rightful owners, all materials to their authors. If you are the owner of the content and do not want us to publish your materials on our website, please contact us by email – [email protected]. The content will be deleted within 24 hours.
changingclassicEducation newsEducation updateMoviesnews updatestaytechi live
Share