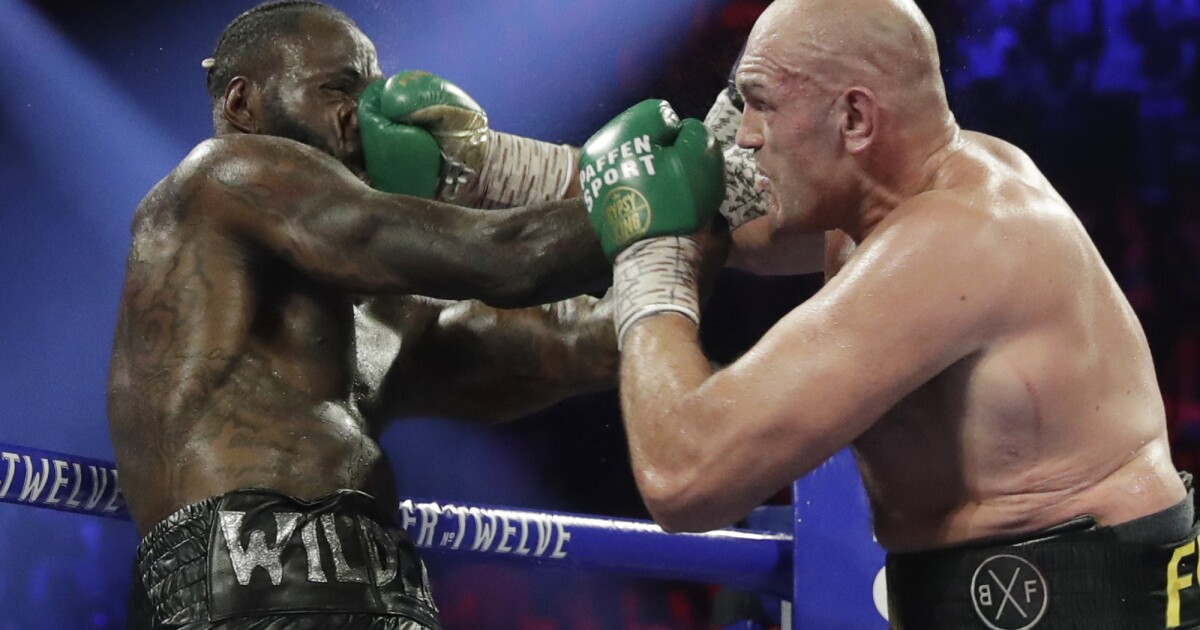 Tyson Fury is sitting shirtless in a Mercedes-Benz Sprinter singing, “It’s getting hot in here, so take off all your clothes.”

The 6-foot-9-inch heavyweight champion has a penchant for hitting the high note, and it’s no different today, as he’s crooning Nelly’s 20-year-old dance anthem “Hot in Herre.”

It’s a scorching 94-degree day in Los Angeles. The song and Fury’s physical appearance are apropos

as he promotes his trilogy fight against Deontay Wilder at T-Mobile Arena in Las Vegas on Saturday night.

Fury was originally supposed to fight Wilder on July 24, but the British boxer contracted COVID-19 almost two weeks before the original fight date.

What was hot then is not so much now, and it has nothing to do with a seasonal change.

After twice knocking down and dominating Wilder for seven rounds to score a stoppage win in February 2020, Fury has been relegated to the sidelines for reasons ranging from the pandemic — twice contracting the coronavirus — to on-again, off-again negotiations with Anthony Joshua to dealing with the thorn in his side that is Wilder, who won an arbitration case in May to force his contractual right to a third fight.

Fury (30-0-1, 21 KOs) and Wilder (42-1-1, 41 KO) will finally meet — their first fight in 2018 was a split draw — but the heavyweight affair has somewhat fizzled since it now has to compete with the Major League Baseball playoffs and college football on Saturday night for fan affinity. The fact that Oleksandr Usyk and not the more marketable Joshua is waiting at the finish line does not help.

The PR engines of ESPN and Fox, which are co-producing the bout (available on pay-per-view for $79.99), will undoubtedly help drum up interest for what is still a marquee fight.

“I was guaranteed to get $75 million to fight Anthony Joshua in Saudi Arabia, but now I’m getting 60% and depending on how well [the Wilder fight] does on PPV,” said a perturbed Fury. “I made 70 million for the second Wilder fight. I should have made $370 million, but I’m not complaining. I trained really hard for that second fight. I was expecting a good challenge, and it wasn’t.”

The often affable yet self-contradicting Fury, however, soon suggested that money doesn’t matter.

The unpredictable Fury frequently says things for effect and is known to talk out of both sides of his mouth.

Minutes after he said he was staying offline in order to focus and prepare for Wilder, he was thumbing through Google News, monitoring headlines popping up with his name in them immediately following a news conference.

During the media gathering, the former U.S. Olympic bronze medalist Wilder thanked God and his lawyers for finally getting Fury to fight him but refused to engage any further as he sat in silence wearing headphones.

“For a guy who fought so hard to get the third fight with me, he looked like he didn’t want to be there. I wanted him to make a move so I can annihilate him,” said Fury.

The immensely powerful Wilder has plenty of hard-hitting questions to answer, especially after the laundry list of excuses he provided following the Fury loss. In no particular order, Wilder said Fury’s gloves were compromised, his since-fired trainer Mark Breland threw in the towel because he was disloyal, his water was spiked, referee Kenny Bayless performed poorly and the elaborate costume he wore during his ring walk sapped his energy.

“This has, hands down, been the best training camp I’ve had in my entire career,” said Wilder. “Sometimes you need events to happen in life to bring about changes that you need. We’ve had no distractions and I’m just in a happy state mentally, physically, emotionally and spiritually.

“You’re looking at a rejuvenated and reinvented Deontay Wilder.”

Tasked with the revival plan is new trainer Malik Scott, who has joined in a lead role to support co-coach Jay Deas. Scott is a former heavyweight contender who has the dubious distinction alongside Wilder of getting his eardrum busted by Fury. In 2012, Scott was a Fury sparring partner in Holland but left after two days once Fury injured his ear, just like he did to Wilder in their last fight.

“How can Malik expect Wilder to do something he couldn’t?” said Fury. “I don’t care if Deontay had Angelo Dundee in his corner mixed with Arnold Schwarzenegger and The Rock — he can have more speed than Bruce Lee and more power than Mike Tyson. I don’t care. It doesn’t mean anything to me.”

Fury will be defending a heavyweight title, the WBC crown he won from Wilder, for the first time in his career. He was also a unified champion after beating Wladimir Klitschko in 2015 but was stripped of his titles when serious mental health issues paired with obesity and alcohol and substance abuse derailed his life until 2018.

“I’m a one-of-a-kind person, really,” said Fury. “There is a lot more places I’d rather be, like home in [the United Kingdom town of] Morecambe … … You’ll never meet anyone like me the whole of your existence. I don’t give a f— about money, power or anything. It doesn’t mean anything to me to be a heavyweight champion. I don’t feel any different today than when I wasn’t champion 10 years ago. But I do love to fight. It is what it is. It’s not going to last forever. I only have a short time left in boxing. I’m enjoying it. I’m savoring it.”

The 33-year-old starts singing again. “When you’re living in the Hall of Fame .…” It’s the chorus from the Script’s hit jam. Fury will likely get the enshrinement in the International Boxing Hall of Fame
in Canastota, N.Y., one day should he beat Wilder again.

The conversation then comes to a stop once the cargo van pumps its brakes at an LAX hanger.

A half-naked Fury is ready to board a flight back to Las Vegas.

He signs off hinting at a swan song.

“This might be my final fight,” said Fury. “If I walked away today, got on this private jet and went home back to the U.K., I’ve got nothing to prove to nobody. I’ve done everything I can do.”

Denial of responsibility! TechiLive.in is an automatic aggregator around the global media. All the content are available free on Internet. We have just arranged it in one platform for educational purpose only. In each content, the hyperlink to the primary source is specified. All trademarks belong to their rightful owners, all materials to their authors. If you are the owner of the content and do not want us to publish your materials on our website, please contact us by email – [email protected]. The content will be deleted within 24 hours.
DeontayFuryhintsnews updatereignitesRivalrysongsports news
Share

Taiwan president to pledge defence of sovereignty, democracy By Reuters