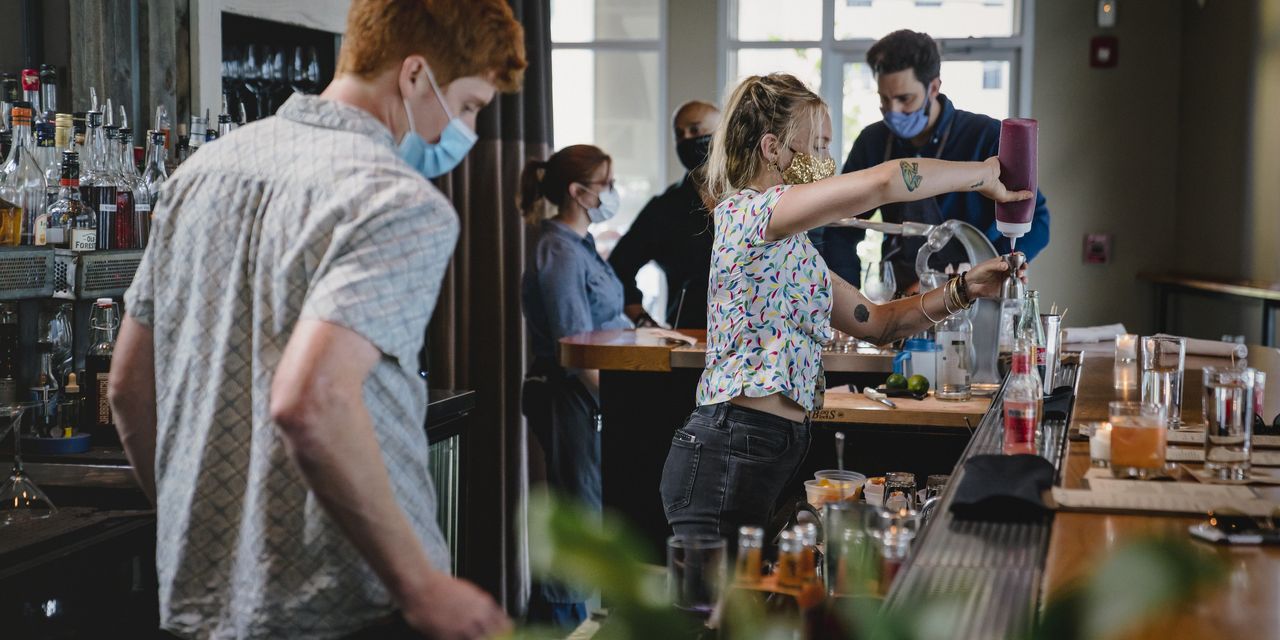 Available jobs in the U.S. climbed further above pre-pandemic levels last month following a record surge earlier in the spring, a sign of strong demand for workers—with leisure and hospitality sectors showing the most growth in openings.

Openings continued to grow in May, according to job search site Indeed.com. That followed an increase of nearly 1 million unfilled positions in April, to 9.3 million, the highest level on records back to 2000, according to a Labor Department report released Tuesday.

Open positions nearly matched the 9.8 million Americans who were unemployed, but searching for work during the month. The rate at which workers quit their jobs, a sign of confidence in the labor market, also rose to a record high in April, and the rate at which workers were laid off fell to a record low, the Labor Department said. The most quits occurred at retail jobs.

Both private and government measures showed surging demand for restaurant, hotel and other service-sector workers.

Indeed data showed the number of overall postings at the end of May was 27% above February 2020’s, from up 23% at the end of April. The May gains were led by growing help-wanted ads for jobs in food service, hospitality and tourism and loading and stocking, the latter reflecting the continued strength of online shopping.

“The unprecedented surge in demand means that the outlook for job seekers right now is relatively bright,” said

economic research director for North America at Indeed. “Given the tightness of the labor market, employees and job seekers may have a stronger hand right now.”

“
‘Given the tightness of the labor market, employees and job seekers may have a stronger hand right now.’
”

Job postings at food-services businesses were 25% above pre-pandemic levels at the end of May, according to Indeed. As recently as March, the sector has less demand for labor than in early 2020. Job postings in hospitality and tourism nearly returned to pre-pandemic levels last month, ending May 3.6% below the February 2020 level.

chief executive of the Shuckin’ Shack Oyster Bar restaurant chain, said he is helping cover a staffing shortfall at his restaurants near Wilmington, N.C., by working in kitchens as needed. The company recently hired nine workers, and Mr. Weathington said he could easily add that many more—if he could find them.

“We’ve seen an incredible surge in business,” Mr. Weathington said. “We as an employer have to get more creative in order to attract and retain people.”

He said Shuckin’ Shack recently called a dozen people in for interviews, he said, and 10 didn’t show up. The company is offering a $500 retention bonus for those who stay on the job for 60 days, giving the option of four-day workweeks and providing workers a meal during their shifts and a second meal to take home.

Although managing the businesses and working in the kitchen on weekends make for long weeks, Mr. Weathington said he enjoys it, most often filling the expediter role, the person who shuffles food from the cooks to the servers.

“I’m the loudest—and I know what the food should look like,” he said.

While demand for labor is surging in the service sector, it is starting to cool in other industries. The number of openings in May declined in construction and plateaued in recent weeks in manufacturing, Indeed said. Those sectors were among the first to return to pre-pandemic levels of openings late last summer. The Indeed data also showed openings for retail jobs nearly held steady last month after strong gains earlier in the year.

The trends in those sectors suggest that the broad resurgence in demand for labor is reaching a limit in some of the first sectors where demand returned after the pandemic downturn.

“Consumption patterns are changing as the pandemic ebbs, with people shifting spending toward dining out, travel and other services and away from purchases made during the pandemic,” Mr. Bunker said. “That will cause employers’ demand for workers to shift.”

Last year, consumers purchased goods in larger quantities—ranging from toilet paper to televisions—in a trend that benefited manufacturers and retailers, including grocery stores, general merchandise stores such as Walmart and Target, and home-improvement stores. Many people also sought to improve their homes or buy new ones, which helped spark strong hiring in construction.

Rising costs for lumber and other materials, as well as rising prices for new homes, are constraining demand for residential construction. Meanwhile, auto manufacturers have faced shortages of microchips, which have caused some layoffs in that sector.

Continue reading about the economy with these editor-selected articles

Construction employment fell by 20,000 in May, the Labor Department said in a separate report last week. Retail jobs fell by 6,000 last month. Manufacturing employment rose in May but not enough to offset losses in April.

Tuesday’s report from the Labor Department showed 1.3 million open jobs in the accommodation and food-service sector at the end of April, and that same amount in healthcare and social assistance. There were nearly 1 million open retail jobs.

Available jobs, as a share of the workforce, rose in all regions of the country. The South had the highest rate, followed closely by the Northeast and Midwest. Openings rose in the West, but trailed the rest of the country.

Denial of responsibility! TechiLive.in is an automatic aggregator around the global media. All the content are available free on Internet. We have just arranged it in one platform for educational purpose only. In each content, the hyperlink to the primary source is specified. All trademarks belong to their rightful owners, all materials to their authors. If you are the owner of the content and do not want us to publish your materials on our website, please contact us by email – [email protected]. The content will be deleted within 24 hours.
AnalysisartsbeveragesBusinessBusiness/Consumer ServicesC&E Industry News FilterConsumer Goodsconsumer services
0
Share