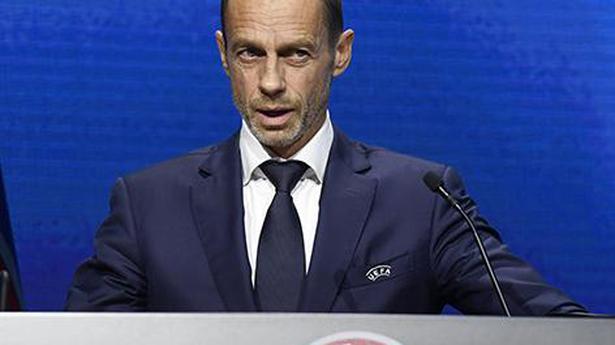 UEFA has opened disciplinary cases against Super League rebels Real Madrid, Barcelona and Juventus that could lead to bans from the Champions League.

Proceedings are now active for “a potential violation of UEFA’s legal framework,” UEFA said on Tuesday.

The European soccer body’s statutes include a section on “prohibited groupings” of clubs or leagues forming without UEFA’s permission or outside its control.

The three clubs now being prosecuted by UEFA are the remaining holdouts among 12 founders of the failed Super League project who refused to renounce it.

UEFA president Aleksander Ceferin warned the clubs last month that “if they say we are a Super League, then they don’t play Champions League, of course.”

UEFA gave no timetable for the expected disciplinary cases against the three which have all qualified on merit for the Champions League next season.

Any bans for the clubs — and elevation of other Spanish and Italian teams to replace them — would likely lead to appeals at the Court of Arbitration for Sport and pressure to resolve the cases before next season’s European competitions.

The Champions League group-stage draw is on August 26 and matches start on September 14.

Those clubs agreed to UEFA’s terms to forfeit 5% of their prize money from European competitions in the 2022-23 season and pay a combined €15 million as a “gesture of goodwill” to benefit children, youth and grassroots football.

For a storied club, a successful season in the Champions League currently earns around €100 million in UEFA prize money.

The agreement also saw the nine clubs consent to be fined €100 million if they seek again to play in an unauthorised competition or €50 million if they breach any other commitments to UEFA as part of the settlement.

Denial of responsibility! TechiLive.in is an automatic aggregator around the global media. All the content are available free on Internet. We have just arranged it in one platform for educational purpose only. In each content, the hyperlink to the primary source is specified. All trademarks belong to their rightful owners, all materials to their authors. If you are the owner of the content and do not want us to publish your materials on our website, please contact us by email – [email protected]. The content will be deleted within 24 hours.
Loading...
actbundesligafootballnews updateReadsrebelsRiotsoccer news
0
Share

How to collaborate with Apple Pages via iCloud