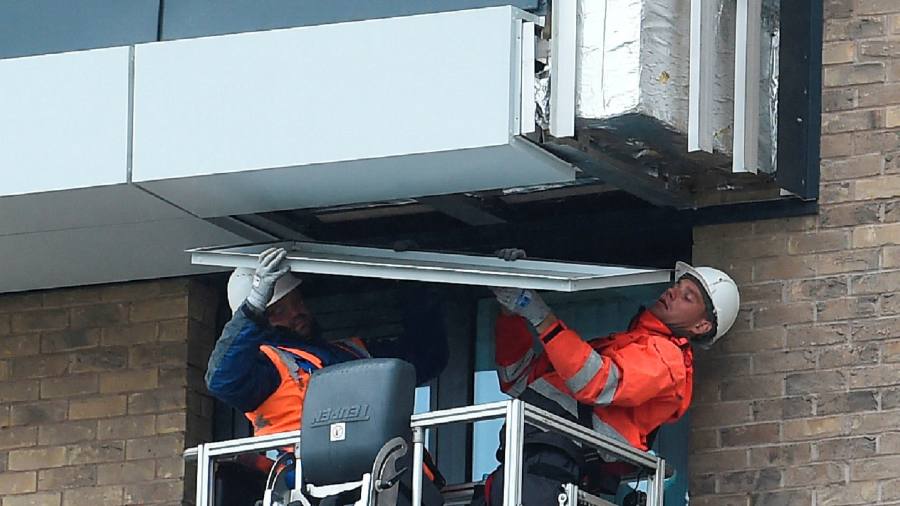 Developers will next week be asked by ministers to pay up to £4bn to cover the costs of the removal of dangerous cladding from tens of thousands of buildings, with the threat of legal compulsion if they refuse.

Michael Gove, the minister in charge of housing, has been told by the Treasury there will be no additional government cash to remove cladding from lower height buildings and that developers must pay.

Gove, who will make a statement on the issue next week, is declining to find the cash from within his departmental budget.

“If the industry doesn’t come up with a solution, we will impose it by law,” said one ally of Gove.

Concern over the safety of building cladding was triggered by the Grenfell Tower fire in 2017 in which 72 people died.

At first, high-rise tower blocks clad in similar materials to Grenfell were the subject of scrutiny, but the scale of the crisis was broadened in January 2020 when ministers said that multistorey, multi-occupancy residential buildings of any height should be assessed for fire risk.

That dragged in more than 800,000 additional flats across the UK, hitting leaseholders who faced having to take out personal loans to cover work on buildings between 11m and 18.5m in height.

The government has set aside £5bn to fund the removal of cladding for higher buildings — £2bn of which will be raised through a levy on developers. It now wants developers rather than leaseholders to pay to strip the material from lower buildings as well.

Cladding campaigners have long asked that the government accept both the principle that buildings under 18.5m ought to be covered and that leaseholders should not have to pay.

The BBC’s Newsnight, which first reported the story, said that Gove, minister for levelling up, would put the building sector “on notice” when he makes a statement to the Commons next week.

It said that Simon Clarke, the Treasury’s chief secretary, had told Gove that no new Treasury funding would be available for the work, that the total cost of extra cladding removal must not top £4bn and that the provision would cover only cladding, not other fire safety defects.

Developers have resisted footing the bill, arguing that most of the buildings affected were fitted out according to government regulations in force at the time.

“The profits of developers have been strong over a long, long period so we’re an easy target. The government is not going after the cladding companies or the contractors. Our industry doesn’t pretend there’s no blame, but it’s not the only one responsible,” said Matthew Pratt, chief executive of Redrow.

A colleague of Gove said: “We are not pretending this is the final answer to the crisis, but it’s an important step. We will be guided by three principles — the polluter must pay, leaseholders must be protected and common sense and proportionality must be restored.”

Parliament’s housing committee has estimated that fixing the cladding crisis could cost as much as £15bn.

The FT reported in November that the Bank of England was concerned about the impact of the cladding crisis on financial stability and had been pressuring lenders to audit their exposure to homes that might be unsellable.

The Prudential Regulation Authority, the BoE body responsible for supervising banks, believes the government has not grasped the scale of the cladding crisis and expects that the costs to mortgage lenders will be larger than those outlined so far, said the people.

Owners of property with potentially unsafe cladding are currently faced with huge bills, either to fix defects or to maintain temporary fire safety measures such as 24-hour patrols.

Until that work is fully costed or complete, valuers cannot assess the worth of a property, preventing lenders from issuing mortgages on those homes.

Denial of responsibility! TechiLive.in is an automatic aggregator around the global media. All the content are available free on Internet. We have just arranged it in one platform for educational purpose only. In each content, the hyperlink to the primary source is specified. All trademarks belong to their rightful owners, all materials to their authors. If you are the owner of the content and do not want us to publish your materials on our website, please contact us by email – [email protected]. The content will be deleted within 24 hours.
4bnBillbuildingbusiness newsBusiness updatecladdingdangerousdevelopers
Share

8 Different Types Of Training Videos And When To Use Them