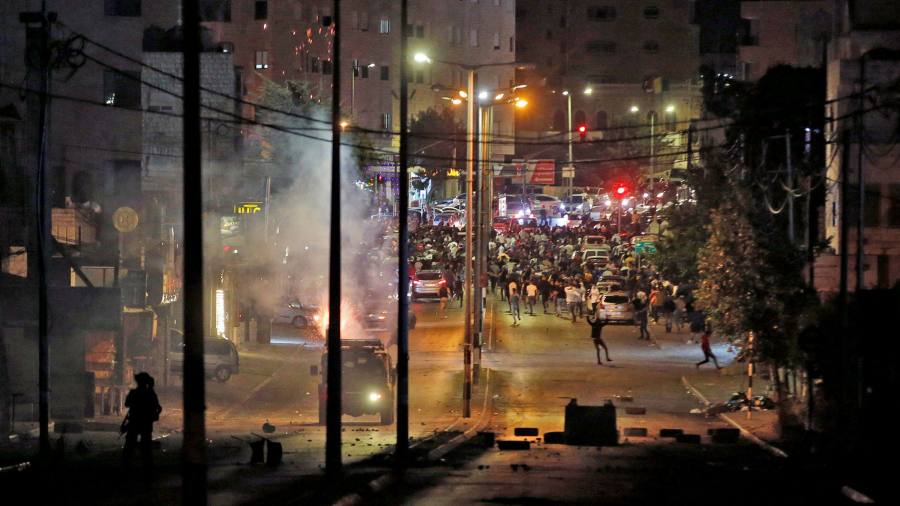 International efforts to de-escalate the biggest military confrontation between Israel and Palestinian militants in seven years intensified ahead of a UN Security Council meeting on Sunday following another night of fighting.

The Security Council, chaired by China, is due to meet in New York later on Sunday.

The UN, Egypt and Qatar were negotiating a short ceasefire to get fuel for Gaza’s only power plant into the Mediterranean enclave, blockaded by Israeli since 2007, two western diplomats told the Financial Times. The Gaza Strip, home to 2m people, will run out of fuel by Monday at the latest, an Israeli official estimated.

Israel’s security cabinet is also due to meet on Sunday to discuss Hamas’s offer of a long-term truce, an Israeli government aide told the FT. The military wants the Palestinian group to return the bodies of two soldiers. Also at stake is the fate of two Israeli civilians held in Gaza, the aide said.

Meanwhile, the bombing continued unabated for a seventh day. Israel’s military said it had struck the homes of Hamas leader Yahyeh Sinwar and his brother. Sinwar was released from an Israeli prison in 2011 during a prisoner exchange and has since risen to the top of Hamas’s leadership. An Israeli official described him as “the biggest threat”.

Hamas fired rockets at Tel Aviv at around midnight on Saturday and at towns near the Gaza Strip on Sunday morning.

The death toll in Gaza stood at 181 dead, including 83 women and children, Gaza health officials said.

“We are still in the midst of this operation, it is still not over and this operation will continue as long as necessary,” Israeli prime minister Benjamin Netanyahu said on Saturday night.

Netanyahu defended the biggest military campaign against Hamas since Israel’s 2014 war with the Islamist group as a “just and moral war.” He added: “We are doing everything, but everything, to avoid or limit as much as possible harming civilians.”

His comments came after Israel destroyed the al-Jalaa residential and office block that hosted US news agency Associated Press and Qatari television network Al Jazeera. The bombing raised “concerns about the safety and security of journalists” and “reinforced the need to ensure their protection”, US president Joe Biden told Netanyahu in a phone call on Saturday, according to the White House.

“In recent years . . . the UN Security Council resolutions have not been earnestly implemented and, in particular, the Palestinian right to build an independent state has been continuously violated,” Wang Yi, China’s foreign minister, was quoted as saying by Chinese state media.

In the occupied West Bank, which was relatively quiet until Israeli security forces killed 11 Palestinians on Friday, Arab protesters burned tires and threw Molotov cocktails at Israeli soldiers during night protests. Two Palestinians were killed overnight, including one shot by Israeli forces in the abdomen.

The territory, which Israel has occupied since the 1967 war, is the seat of Fatah, Hamas’s rival Palestinian faction, and is home to about 650,000 Jewish settlers, including at least 200,000 in East Jerusalem.

Israeli Arabs account for about one-fifth of the Jewish state’s population, carry Israeli passports and have the right to vote. But they say they suffer discrimination and are a target for rightwing Israeli politicians.

The crisis erupted after weeks of tension in and around Jerusalem when police used rubber bullets, tear gas and stun grenades against Palestinian protesters in the compound of al-Aqsa mosque, Islam’s third holiest site. More than 600 Palestinians were wounded.

The al-Aqsa mosque lies in a compound — known to Muslims as the Haram ash-Sharif, or Noble Sanctuary, and to Jews as Temple Mount — that is sacred to both religions.

Denial of responsibility! TechiLive.in is an automatic aggregator around the global media. All the content are available free on Internet. We have just arranged it in one platform for educational purpose only. In each content, the hyperlink to the primary source is specified. All trademarks belong to their rightful owners, all materials to their authors. If you are the owner of the content and do not want us to publish your materials on our website, please contact us by email – [email protected]. The content will be deleted within 24 hours.
Loading...
continuesCouncilcrisisEducation newsEducation updateFightingIsraeliPalestinianMeet
0
Share

Seth Rogen recalls he was ‘humiliated’ in failed attempt to meet Beyonce: ‘Was hit so hard by her security guard’