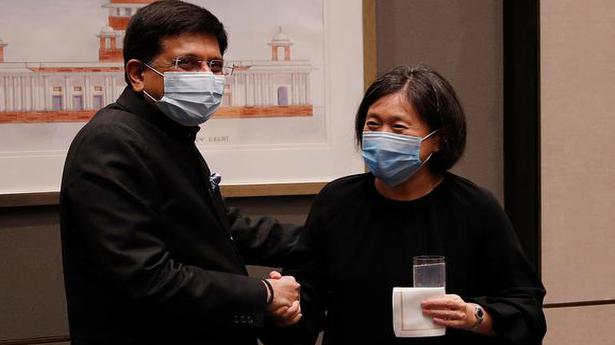 On a maiden two-day visit to revive the U.S.-India Trade Policy Forum (TPF) after a four-year hiatus, Ms. Tai said the relationship is a top priority both for President Biden and for her, but highlighted that bilateral trade “never seems to quite live up to its significant potential”.

“At the USTR’s office, we hear very frequently from our stakeholders, who are not shy, on issues that will be familiar to those of you involved in moving goods and services between our two countries — market access restrictions, high tariffs, unpredictable regulatory requirements, restrictive trade measures… These are issues where we intend to make progress on and they will be on the top of my list while I am here,” Ms. Tai said.

Signalling a major switch to a “worker-centric” focus in the U.S. policy, Ms. Tai said: “President Biden is convinced that the U.S. policy needs a fundamental shift to ensure that our policies and actions focus on the impact that trade and trade agreements have on the lives of real working people.”

She said she will work closely with the Indian Government ‘colleagues’ including Labour and Employment Minister Bhupendra Yadav on connecting trade “more directly with working people”.

“There is a huge potential for growth in our two countries, in areas like the digital economy, services, health-related trade and yes, even agriculture. I believe that a revive TPF can help our trade relationship keep pace with our other areas of engagement,” she said after a meeting with Commerce and Industry Minister Piyush Goyal.

“India and the U.S. also face shared challenges like climate change and sustainability, vulnerable supply chains and promoting market-oriented principles and structures. These are areas that are ripe for closer collaboration now,” Ms. Tai said, underlining that the U.S. is committed to ensuring a robust and sustainable trade partnership.

“Delivering results and further integrating our two economies will require concerted efforts from our Governments, businesses, civil society, our people as both workers and consumers,” she said on the eve of the TPF meeting on Tuesday.

Mr. Goyal said he was pleased that the trade policy forum is being rejuvenated after “languishing for four years” and expressed confidence that the two sides will be able to resolve issues in an amicable manner and send a message to the world that the U.S. and India are strong partners.

“Citizens from both our countries look towards India-U.S. partnerships with great optimism and hope. The U.S. and India share a partnership that can not only help each other but the entire world to recover, if we were to work together,” he said.

Mukesh Aghi, President of the USISPF, said: “Minister Piyush Goyal recently spoke at USISPF’s annual general meeting and spoke of a trillion-dollar bilateral trade target between India and the U.S. by 2030. Our present bilateral trade is at $150 billion. For such a target to be achieved, we need increased foreign investments from the U.S. and an early harvest deal could help pave the way for larger deals. It is indeed positive to see U.S. Trade Representative Katherine Tai in New Delhi and we are hoping that the Trade Policy Forum (TPF) could lay the foundations for an early harvest deal.”

Denial of responsibility! TechiLive.in is an automatic aggregator around the global media. All the content are available free on Internet. We have just arranged it in one platform for educational purpose only. In each content, the hyperlink to the primary source is specified. All trademarks belong to their rightful owners, all materials to their authors. If you are the owner of the content and do not want us to publish your materials on our website, please contact us by email – [email protected]. The content will be deleted within 24 hours.
bilateralEducation newsEducation updateimpedimentsIndiaKeynews updatepolicies
Share

OnePlus has bold plans for its first foldable phones