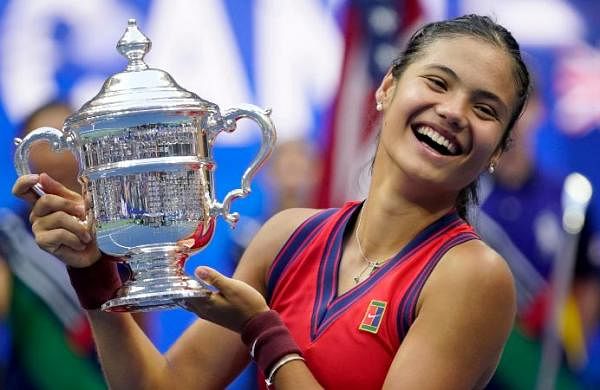 US Open champion Emma Raducanu is teenage star in vogue

NEW YORK: Emma Raducanu’s journey to US Open champion at the age of 18 is even more remarkable given the Briton was the shy youngster who felt she was always “the odd one out.”

Raducanu, who became the first qualifier in history to win a Grand Slam singles crown with victory over Leylah Fernandez in New York on Saturday, has enjoyed a year beyond her wildest dreams.

When she played Wimbledon in July, it was the first time she had ever appeared in the main draw of a Grand Slam.

A virtual unknown at the start of that tournament, she became the youngest British woman to reach the third round for 19 years.

Even before she travelled to New York, she appeared on the front cover of British Vogue.

At Flushing Meadow her poise and nerveless play belied her age as she became the darling of fans and media.

As a child though, the drive instilled in her by her Romanian father Ian and Chinese mother Renee, who insisted she try a range of activities including go-karting, ballet or horse riding, made her feel a bit of an outsider.

“When I was younger, I was the only girl in my group karting or doing motocross, and I thought it was pretty cool,” she explained in Vogue.

“For example, one time, my motocross teacher was like, right, we’re going to do press-ups. I was the only one who could do it, so I was proud of myself for that.”

It was tennis, though, that her teachers identified from the age of five as the sport in which she would shine.

Her primary school teacher Rebecca Rodger said that when the school held tennis coaching, most of the children had difficulty even making contact with the ball.

“But there was Emma having a rally with the coaches. We couldn’t quite believe it. Even then I remember thinking that we were going to see her at Wimbledon,” Rodger told The Times.

Her instinct was spot-on as Raducanu lit up Wimbledon, with a mix of deft stroke play and power hitting far from what one would expect of an international novice.

Also striking was the maturity she showed in fielding questions from the media.

In the end, breathing difficulties forced her to retire from her fourth-round match at the All-England Club.

However, showing an extraordinary strength of character she has put that behind her to become the first qualifier to reach a Grand Slam final.

She credits her parents for this trait.

“For me, having a Chinese mum, she definitely instilled in me from a young age a lot of discipline and respect for other people into me,” she said.

“I think having parents like I do, they always push me.

“They have high expectations. I’ve always tried to live up to that.”

Fulfilling those high expectations will bring with it unthinkable riches.

The £181,000 ($250,000) she earned at Wimbledon for reaching the last 16 — her then richest payday — is loose change beside the $2.5 million she earned at being crowned US Open champion and the endorsements that come with it.

Already signed up to Nike, Wilson and jeweller Tiffany, more are bound to come her way.

Marcel Knobil, the founder of Brand Council and Superbrands, told The Mirror she fulfils the role of ‘hero’ perfectly.

“Within a couple of years she can confidently look forward to £10 million in revenue but if she wins the final it could be easily doubled to £20 million,” he told the newspaper.

It is fortunate then that Raducan has a brain for figures, perhaps inherited from her parents who both work in finance.

At Wimbledon, she claimed she would swap good grades in the English school-leaving A-Level exams — she took Maths and Economics in April — for a long run in the tournament

No need to guess what the grades were after the 2021 she is enjoying — an A and an A-plus.

Loading...
Denial of responsibility! TechiLive.in is an automatic aggregator around the global media. All the content are available free on Internet. We have just arranged it in one platform for educational purpose only. In each content, the hyperlink to the primary source is specified. All trademarks belong to their rightful owners, all materials to their authors. If you are the owner of the content and do not want us to publish your materials on our website, please contact us by email – [email protected]. The content will be deleted within 24 hours.
ChampionEmmaEmma Raducanunews updateOpenRaducanusports newssports update
0
Share

Why the idea of ‘Queen Camilla’ may finally be accepted