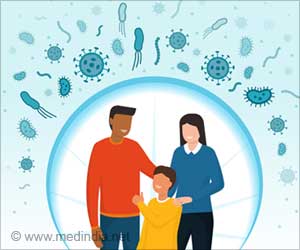 First identified from Colombia in January this year, infections from Mu have since been recorded in South America as well as in Europe, South Korea, Japan, Canada and the US.

‘The global prevalence among sequenced cases has declined and is currently below 0.1 per cent, the WHO has said. But the global health body said that it is monitoring the new Covid-19 strain as cases continue to emerge across parts of the world.’

According to open-access database GISAID (Global Initiative on Sharing Avian Influenza Data), so far nearly 2,000 Mu infections have been identified in the US. Most cases have been recorded in California, Florida, Texas, and New York, among others, the Washington Post reported.

But, it is not an “immediate threat right now” in the US, where the Delta variant remains the cause of over 99 percent of cases in the country, top infectious disease expert Anthony S. Fauci was quoted as saying at a press briefing this week.

While the government was “keeping a very close eye on it,” the variant was “not at all even close to being dominant”, he added.

According to the Japan Times, two Mu variant cases were detected in the country in June and July during airport screenings. Some 32 people in the UK have been diagnosed with the Mu variant, The Guardian reported.

However, it is unclear how much protection the vaccines offer against this variant.

“Mu variant has various mutations which indicate that it could be more resistant to vaccines, similar to Beta variant,” said the WHO in its recent epidemiological update.

“But this needs to be confirmed by further studies,” it added.

Fauci noted that while laboratory data had shown that the Mu variant can evade certain antibodies — among them those induced by vaccine shots, there is currently a lack of clinical data and other research involving people that shows this.

He stated that overall, vaccines remain effective and the best protection against the coronavirus, the report said.

The current evidence showed that Mu was likely “more transmissible” than the original coronavirus strain, Paul Cardenas, Professor of infectious diseases and genomics at Universidad San Francisco de Quito in Ecuador, was quoted as saying to The Post.

Mu has “been able to outcompete Gamma and Alpha in most parts of Ecuador and Colombia”, he said.

However, there was no sign yet that people should be more worried, Cardenas added.

Meanwhile, India has not detected any case of Mu variant from over 51,000 samples analysed so far in the country, the government has said.

“We are closely monitoring the new coronavirus ‘Variants of Interest’ named MU and no case has been detected so far in India,” Indian Council of Medical Research Director General Dr Balram Bhargav said.

Loading...
Denial of responsibility! TechiLive.in is an automatic aggregator around the global media. All the content are available free on Internet. We have just arranged it in one platform for educational purpose only. In each content, the hyperlink to the primary source is specified. All trademarks belong to their rightful owners, all materials to their authors. If you are the owner of the content and do not want us to publish your materials on our website, please contact us by email – [email protected]. The content will be deleted within 24 hours.
Casescoronavirus variantCovidHealth newsHealth updateMu variantnews updateRecords
Share