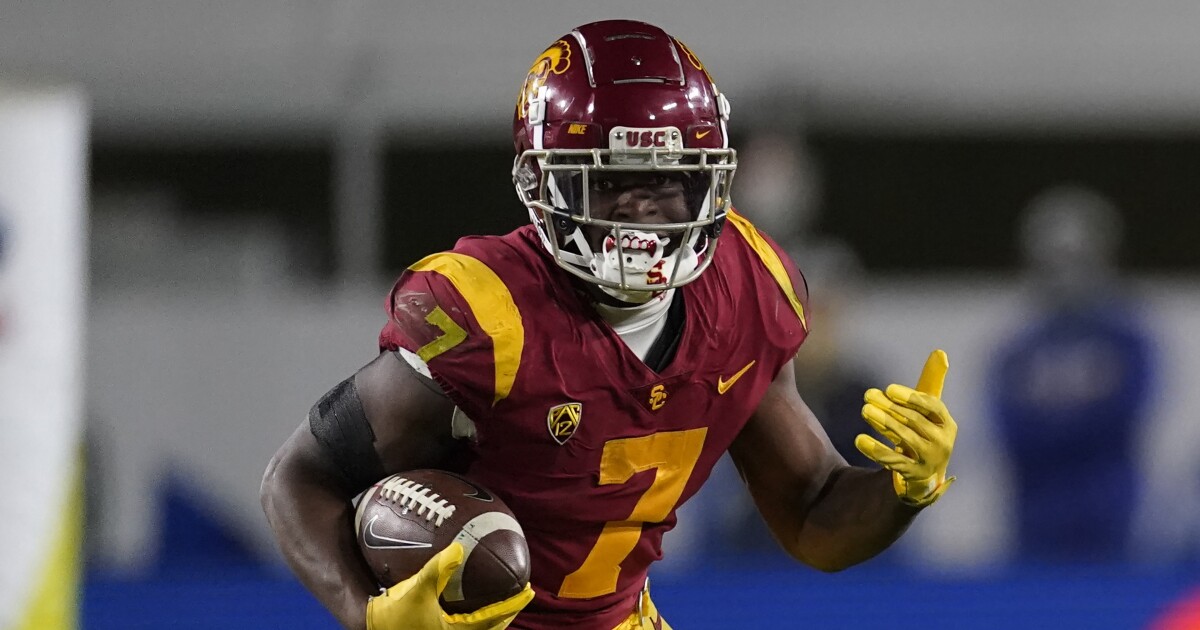 As USC leaves behind a by-committee approach to its backfield, one of its most experienced running backs is planning to leave USC.

Stephen Carr has decided to enter the NCAA transfer portal, a person familiar with the decision confirmed to The Times, ending an up-and-down, four-year tenure that started with a bang as a freshman, only to taper off in the seasons that followed.

His departure clears the way for Texas transfer Keaontay Ingram to join forces with sixth-year senior Vavae Malepeai as the two top backs in a Trojans rushing attack that last season ranked among the worst in college football. USC averaged just 97 yards rushing per game during its shortened 2020 campaign, worse than all but seven teams at the FBS level. Carr played a mostly part-time role, rushing for 176 yards and two touchdowns on 46 attempts, second-most on the team behind Malepeai.

But the trio of Malepeai, Carr, and oft-injured Markese Stepp, who left in January for Nebraska, never found its rhythm. A lackluster showing on the ground led USC to replace its offensive line coach and run game coordinator and retool its philosophy. In January, running backs coach Mike Jinks told The Times that USC planned to scrap its by-committee approach in favor of using “an RB1 and an RB2”.

“Those guys are going to get the majority of our touches,” Jinks said. “They’re going to be allowed to get into a rhythm. The other guys, they’re going to have to contribute on special teams and wait for their opportunity.”

Carr’s decision, which was first reported by USCFootball.com, suggests the senior may have thought he was bound for the latter category, even after an impressive spring. Jinks said late last month that USC’s running backs were making depth chart decisions “extremely difficult”

Carr’s departure should streamline that process. Ingram seemed to assure himself of a role during a strong debut this spring, while Malepeai remained his efficient, reliable self, picking up where he left off last December, when, by season’s end, he’d emerged as USC’s unquestioned top back.

An already crowded backfield was bound to get more cramped this fall when speedy sophomore Kenan Christon joins the fray, after missing spring while competing with USC’s track team.

Carr probably would have carved out at least a part-time role in USC’s rushing attack, anyway. But it’s unlikely that would have captured the attention of NFL scouts.

Carr had no trouble capturing attention early on at USC. A former five-star recruit, Carr burst onto the scene with an electric September debut, when he tallied at least 70 all-purpose yards in each of his first four games as a freshman. Against Stanford, in his second-ever game, Carr rushed for 119 yards in only 11 carries as the change-of-pack back behind Ronald Jones II.

As a freshman, Carr averaged 5.6 yards per carry and 11.1 yards per reception. But as injuries mounted and USC cycled through three running backs coaches, Carr never quite found that stride again. In six games last season, he surpassed 45 rushing yards just once.

Denial of responsibility! TechiLive.in is an automatic aggregator around the global media. All the content are available free on Internet. We have just arranged it in one platform for educational purpose only. In each content, the hyperlink to the primary source is specified. All trademarks belong to their rightful owners, all materials to their authors. If you are the owner of the content and do not want us to publish your materials on our website, please contact us by email – [email protected]. The content will be deleted within 24 hours.
CarrEnterNCAAnews updateportalrunningsports newssports update
0
Share