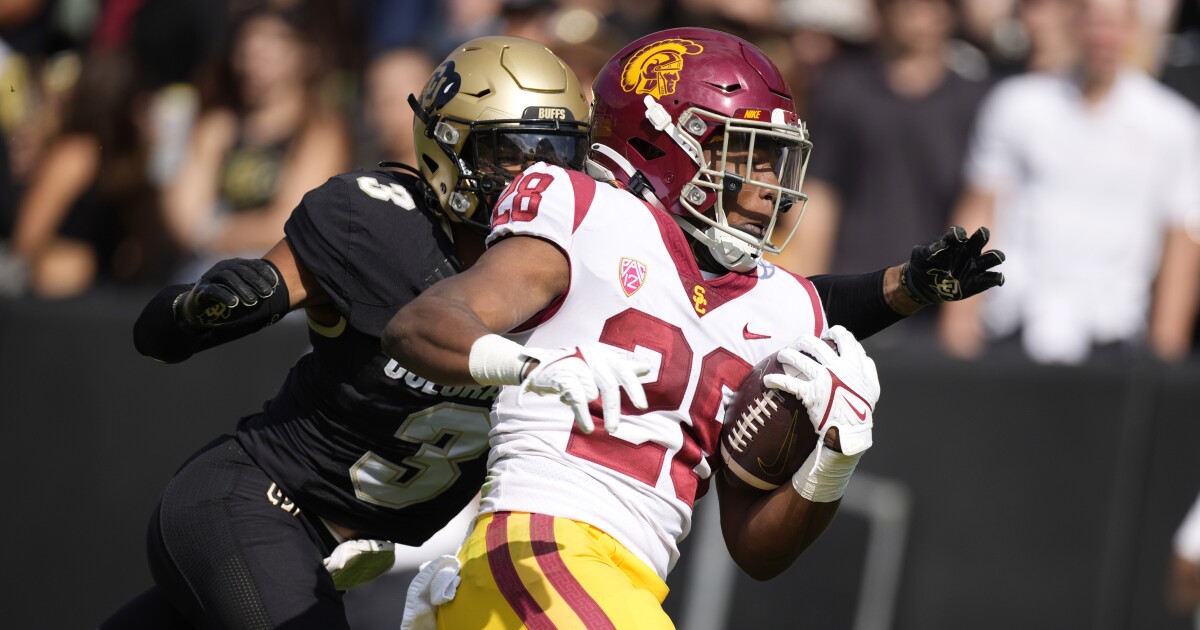 After two dismal defeats in three weeks, USC managed to evade disaster with a resounding road win in Boulder on Saturday. Here’s what we can take away from USC’s 37-14 victory over Colorado.

Through fall camp, it seemed USC had finally found a running back capable of turning around its struggling ground game. But through four weeks of the season, Keaontay Ingram had yet to live up to those expectations.

We finally got a glimpse Saturday of what Ingram and USC’s other backs can do with some actual room to run. The Texas transfer ran wild, averaging nearly nine yards per carry against a Colorado defense that just a few weeks earlier held Texas A&M to under 100 rushing yards.

Ingram gave away a bad fumble that led to a Colorado scoring drive, but he also had six plays of 10 yards or more, including a 53-yard scamper that led to a touchdown two plays later.

As USC racked up 218 rushing yards — its most since November 2018, even the rest of the backfield got involved too. Fellow transfer Darwin Barlow had 61 yards in 10 carries, and Vavae Malepeai contributed a touchdown. Don’t be surprised if we see more of Barlow — and less of Malepeai — in the coming weeks.

Drake Jackson should have more multi-sack games to come

Jackson said earlier this week that he was “just a step off of having multi-sack games.” Turns out, he was even closer than that.

The Trojans’ top edge rusher was credited with two sacks Saturday — and would’ve had a third if Colorado quarterback Brendon Lewis hadn’t fallen forward to the line of scrimmage after Jackson hit him. Regardless, Jackson was a constant presence in the backfield, even reeling in a fumble recovery after Tuli Tuipulotu sacked Lewis and stripped him. In the fourth quarter, he nearly added a pick-six but dropped a potential interception with open field in front of him.

It’s a wonder how much different USC’s defense looks when it’s able to get to the quarterback. It helped to also have a strong performance from Jacob Lichtenstein, who had two sacks.

Penalties are still a big problem

It took just a few sentences of his postgame news conference for USC interim coach Donte Williams to express his dismay.

“Any time you get penalties, you’re keeping somebody around,” Williams said. “Our whole thing was to make sure we have a killer instinct, don’t even let a team feel like they have a little bit of life.”

Michael Trigg is primed for a breakout

All season, USC has been searching for a strong second option to step up alongside Drake London in the passing game. In the second quarter Saturday, Trigg declared himself the top candidate.

The freshman tight end leaped over a much smaller Colorado defensive back to reel in a deep ball from quarterback Kedon Slovis, then turned up field, shedding a tackler before reaching the end zone for a 46-yard touchdown. He finished with 51 yards receiving, second only to London’s 130.

“Trigg showed me that he can come out here and be another mismatch for these guys,” Slovis said. “Man to man, you can’t stop him. Especially when they cloud Drake, that’s a great answer for us.”

Silly Pac-12 defenses, when will they learn? Colorado tried to man up London early and proceeded to give up 96 yards to USC’s top wideout in the first quarter. That’s more than the Buffaloes’ entire offense had until well beyond halftime.

Eventually, Colorado was forced to commit more attention to London. But at the expense of the rest of its defense. London still finished with nine catches for 130 yards.

“If they’re going to bracket me, put three in the end zone on me like they did [in the second half], do that,” London said. “We have weapons out there. People just haven’t seen it yet totally.”

Denial of responsibility! TechiLive.in is an automatic aggregator around the global media. All the content are available free on Internet. We have just arranged it in one platform for educational purpose only. In each content, the hyperlink to the primary source is specified. All trademarks belong to their rightful owners, all materials to their authors. If you are the owner of the content and do not want us to publish your materials on our website, please contact us by email – [email protected]. The content will be deleted within 24 hours.
Coloradoemergesgamenews updaterunningshadowssports newssports update
Share

Las Vegas Sands Could be Sinking By TipRanks