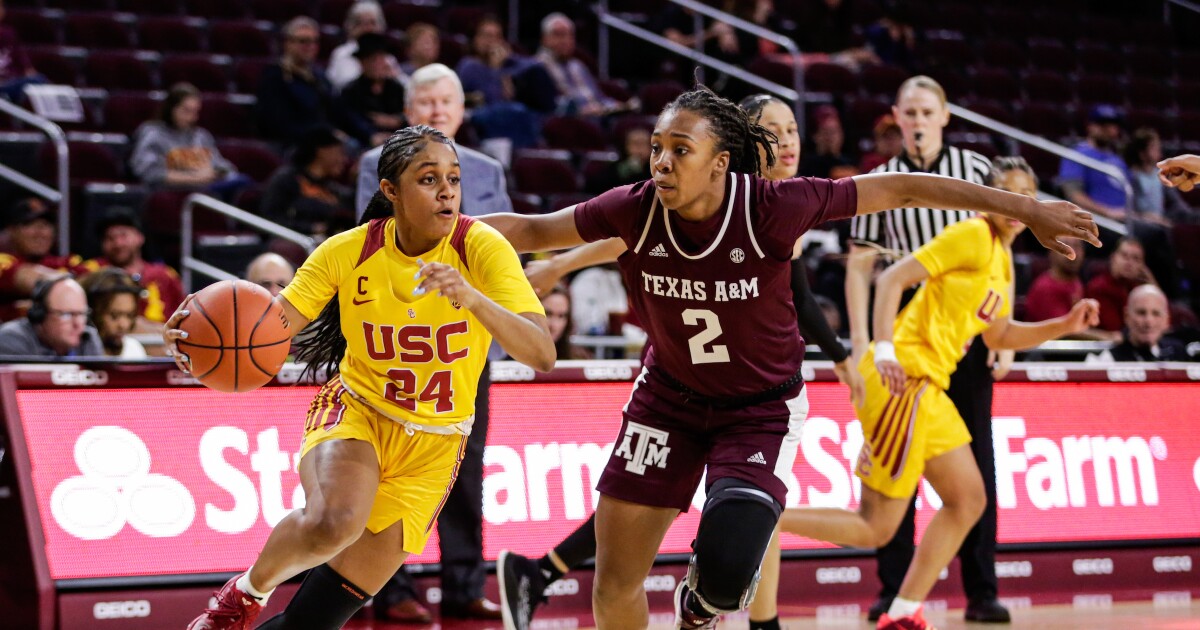 Lindsay Gottlieb knows great basketball. The USC coach’s high basketball IQ is the first of many things players praise about their new leader.

So when the former California coach and Cleveland Cavaliers assistant assembled a PowerPoint on what it takes to become an elite team this summer, the Trojans were all ears. Gottlieb, who was hired in May, pored over key analytics of teams that advanced to the NCAA regional semifinal in recent years, pointing out common threads among the top contenders. Players sat in the film room quietly.

Their silence wasn’t the result of indifference on the topic, Gottlieb said months later. Her players, none of whom have played past a conference tournament with USC, honestly just didn’t know what it took to become an elite team.

That’s where the first-year head coach comes in.

Slogging through a seven-season NCAA tournament drought, the Trojans are eager to drink from Gottlieb’s well of knowledge. She is tasked with leading the once-proud program back to prominence by elevating the Trojans tactically, but most importantly, mentally.

Processing the numbers from Gottlieb’s presentation, Desiree Caldwell felt humbled seeing how far the Trojans had fallen in some categories. Defense especially stuck out, where they ranked among the least-efficient defensive teams. But the senior point guard was also motivated.

Caldwell, a three-time team captain, is already feeling emotional about the end of her USC career. She’s experienced so much, from getting her first postseason experience canceled in 2020 when the Trojans were expecting to make a WNIT appearance, to this season’s coaching change. Although she averaged just 5.9 points, two rebounds and 2.9 assists last season, the 5-foot-8 senior from Texas is “our heartbeat,” Gottlieb said.

“It’s a luxury,” the coach added of having an experienced point guard leading the way for a new coaching staff. “I try not to take it for granted but it’s hard not to just because she’s so consistent and ever present and positive and vocal. All the leadership qualities that you put in boxes, she checks them all.”

With Caldwell at the controls, Gottlieb wants the Trojans to push the pace on offense and use their deep roster of post players, including 2019 Pac-12 freshman of the year Alissa Pili and forward Jordan Sanders, who is the team’s returning leading scorer. Gottlieb is trying to use her players creatively and is experimenting with Caldwell off the ball in addition to her normal point guard duties.

While she prepares to leave USC, Caldwell is determined to help the new coaching staff lay bricks for the future. She is already anticipating her return as an alumna, envisioning a program built on grit and toughness and showcases each player’s best skills.

Gottlieb emphasizes strengthening personal skills, Caldwell said, a contrast to how players can lose their individuality trying to fit into collegiate schemes. The strategy seems perfectly suited for a talented USC roster that boasts three McDonald’s All-Americans and Gatorade players of the year from two states.

The Trojans, who went 11-12 last year before former head coach Mark Trakh retired, are trying to turn talent into wins. Gottlieb inherited the No. 7 recruiting class in the country in freshmen McDonald’s All-American post players Clarice Uche Akunwafo and Rayah Marshall and guard Bella Perkins, who was Virginia’s Gatorade player of the year. USC also pulled in a top-10 recruiting class in 2019, a group headlined by Pili and former USC guard Endiya Rogers, who transferred to Oregon during the coaching change.

The highly touted players provided glimpses of greatness, including a thrilling double-overtime win over UCLA in 2019 and a one-point loss to eventual national runner-up Arizona last season, but success hasn’t been consistent. Armed with key numbers about rebounding, offensive and defensive efficiency and shot selection, Gottlieb was determined to show important areas to focus on to become a dependable Pac-12 power.

Once the epicenter of women’s basketball with legends such as Cheryl Miller, Cynthia Cooper and Lisa Leslie, USC was picked by league coaches to finish ninth in the Pac-12 preseason poll. The splashy coaching hire has the Trojans prepared to turn the narrative around.

“We’ve been underrated for so long,” Sanders said. “Our name was up there, but at this point, we’ve been down towards the bottom, so nobody’s really expecting us to do much. We just have all the opportunity in the world now.”

Denial of responsibility! TechiLive.in is an automatic aggregator around the global media. All the content are available free on Internet. We have just arranged it in one platform for educational purpose only. In each content, the hyperlink to the primary source is specified. All trademarks belong to their rightful owners, all materials to their authors. If you are the owner of the content and do not want us to publish your materials on our website, please contact us by email – [email protected]. The content will be deleted within 24 hours.
basketballCoachEyesgloryGottliebLindsaynews updatereturn
Share

Algorithms mimic the process of biological evolution to learn efficiently