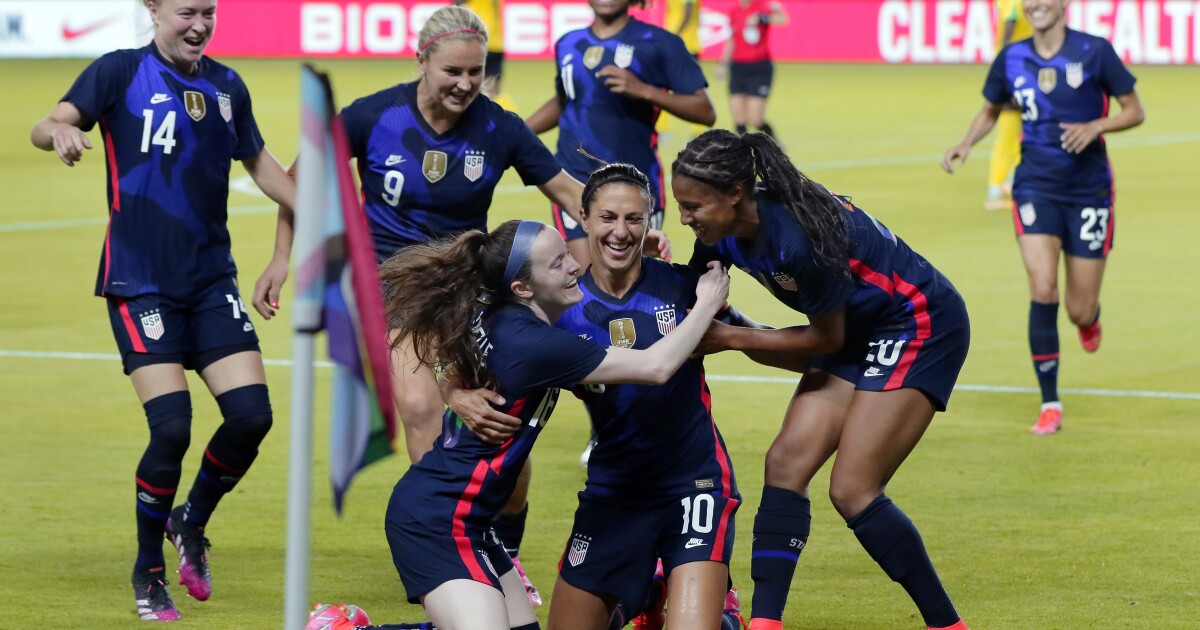 The U.S. women’s national soccer team is returning to Southern California for the first time in more than two years next month when it opens the four-team SheBelieves Cup at Dignity Health Sports Park.

The reigning Women’s World Cup champions, ranked No. 1 by FIFA, will face the 24th-ranked Czech Republic in the second game of a doubleheader on Feb. 17. No. 16 Iceland will meet No. 22 New Zealand in the first game. The U.S. will play New Zealand on Feb. 20 ahead of a Czech Republic-Iceland match. The tournament will then move to Frisco, Texas, for the final games — New Zealand-Czech Republic and U.S.-Iceland — on Feb. 23.

The games in Carson will be the 17th and 18th the women’s national team has played at Dignity Health Sports Park, more than any other stadium in the world, but they will mark the first time the SheBelieves Cup has been played there. The U.S. is 16-0 at the venue, with its last two wins coming over Mexico and Canada in Olympic qualifying in February 2020.

In the past the SheBelieves Cup has featured four top-10 teams, but this winter Germany, England, France, Spain and Canada have elected to play in competing tournaments in Europe.

For the U.S., the tournament kicks off a busy year that will include July’s eight-team CONCACAF W Championship, the qualifying event for both the 2023 Women’s World Cup and the 2024 Olympics.

“When we are integrating newer players, we need as many games as possible and all three of our opponents are very hard to play against,” U.S. coach Vlatko Andonovski said in a statement.

With an average age of about 30, the U.S. had the oldest roster at last summer’s Tokyo Games, where it finished third. Since then Carli Lloyd, 39, has retired and Andonovski has begun working younger players such as Catarina Macario, Sophia Smith and Ashley Hatch into the team.

Denial of responsibility! TechiLive.in is an automatic aggregator around the global media. All the content are available free on Internet. We have just arranged it in one platform for educational purpose only. In each content, the hyperlink to the primary source is specified. All trademarks belong to their rightful owners, all materials to their authors. If you are the owner of the content and do not want us to publish your materials on our website, please contact us by email – [email protected]. The content will be deleted within 24 hours.
CupDignityHealthmonthnews updateOpeningParkSheBelieves
Share

Where to find the best AirPods deals right now

Cast and crew of ‘Dhak Dhak’ ride from from Delhi to…