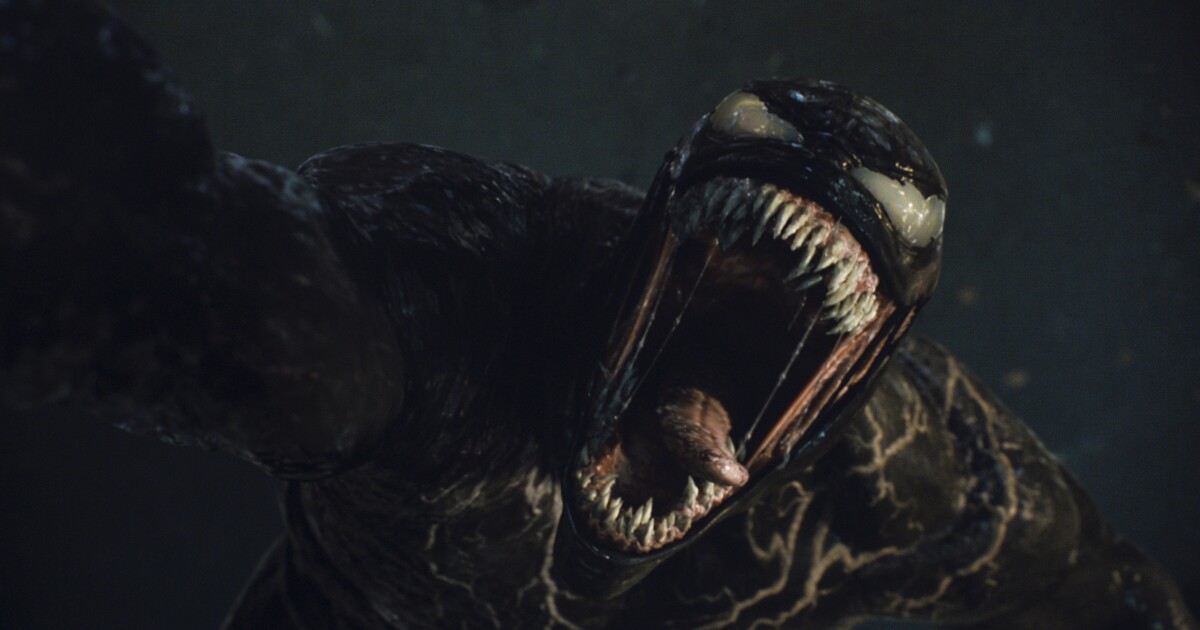 “Venom: Let There Be Carnage” — the highly anticipated sequel to Marvel and Sony Pictures’ irreverent antihero origin story — devoured its prey at the North American box office this weekend, debuting at $90.1 million, according to estimates from measurement firm ComScore.

In addition to outperforming other new releases, the edgy film about the relationship between a troubled journalist and his parasitic alien symbiote (both played by Tom Hardy) also beat the pandemic-era three-day opening weekend record previously set by fellow Marvel blockbuster “Black Widow,” which opened domestically at $80 million in July.

The extra box office revenue “Black Widow” likely forfeited due to its simultaneous release on Disney+ later became the subject of a lawsuit brought by star/executive producer Scarlett Johansson against Disney, which was settled last week. By contrast, “Let There Be Carnage” debuted in theaters only, as will the rest of Sony’s fall slate.

“The exclusivity in theaters just can’t go unnoticed because that is really a pillar of our strategy in terms of this big IP [intellectual property],” said Sanford Panitch, president of Sony Pictures Entertainment Motion Picture Group.

“They’re made for theaters, and it’s just so great to see the audience being willing to come out to enjoy it.”

The second installment in the “Venom” franchise also surpassed its predecessor’s massive debut haul of $80 million, which set an October opening weekend record at the domestic box office in 2018. That number was soon topped by “Joker,” another sinister comic book adaptation — this time from Marvel competitor DC — the following year.

“Joker” still holds the October opening weekend record at $93.5 million, with the “Venom” films in second and third.

“The youth of the franchise — in terms of the potential that it has and the love for this character — is so great to see,” Panitch said.

“And it highlights … the importance of the IP,” added Adrian Smith, president of Sony’s domestic release arm. “As a studio, our patience and strategy with our big IP paid off.”

Overseas, the long-delayed James Bond entry “No Time to Die” is on track for an impressive international opening of $119.1 million, exceeding expectations and becoming the first film since the COVID-19 crisis to launch at more than $100 million abroad without playing in China.

The Halloween-themed family flick came up about $10 million shy of its 2019 parent film’s opening-weekend performance. The shortfall could be attributed to its hybrid release in theaters and video-on-demand, as well as its dismal 27% Rotten Tomatoes score and wariness among parents of its unvaccinated under-12 demographic.

Occupying the third slot is “Shang-Chi and the Legend of the Ten Rings,” ending a whopping four-week streak at No. 1 after the Marvel and Disney tentpole smashed the Labor Day weekend record at the domestic box office last month. “Shang-Chi” raked in $6 million this weekend for a North American cumulative total of $206.1 million.

Opening at No. 4 is Warner Bros.‘s “The Many Saints of Newark,” a prequel of the hit “Sopranos” TV series that launched at $5 million in theaters and is also available to stream on HBO Max.

Rounding out the top five is “Dear Evan Hansen,” which dipped by 67% in its sophomore weekend. Universal’s take on the Ben Platt-starring Broadway musical of the same name generated $2.4 million for a cumulative $11.8 million and is expected to come out soon on VOD.

The triumphant arrival of “Venom: Let There Be Carnage” prefaces what could be the strongest month for the North American box office since the beginning of the COVID-19 pandemic.

Up next is Universal’s “No Time to Die,” which opens domestically Friday, followed by the latest installment in the ever-popular “Halloween” saga (Oct. 15) and Oscar-nominated director Denis Villeneuve’s star-studded adaptation of “Dune” (Oct. 22).

Denial of responsibility! TechiLive.in is an automatic aggregator around the global media. All the content are available free on Internet. We have just arranged it in one platform for educational purpose only. In each content, the hyperlink to the primary source is specified. All trademarks belong to their rightful owners, all materials to their authors. If you are the owner of the content and do not want us to publish your materials on our website, please contact us by email – [email protected]. The content will be deleted within 24 hours.
boxdieentertainment newsEntertainment updatenews updateofficeoverseaspandemic
Share