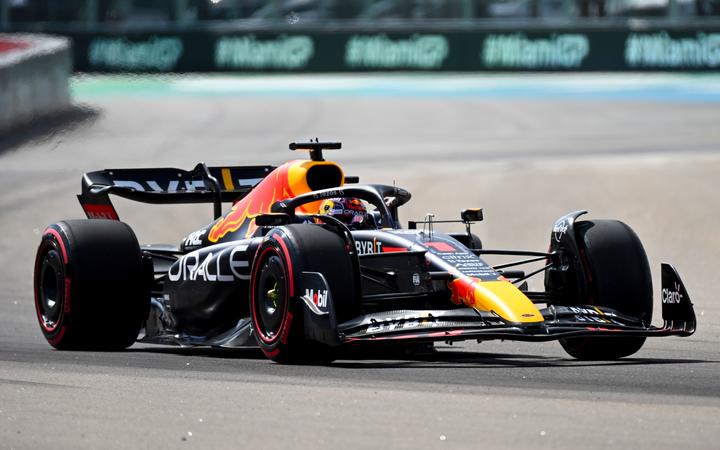 Verstappen wins in Miami, closes the gap to Leclerc

The victory was the Dutch driver’s third of the season, and second in a row, and he made it happen with a crucial overtake around the outside on Sainz at the start to seize second place before blasting past Leclerc on the ninth of the 57 laps.

Verstappen, who also made sure of the bonus point for fastest lap, then held off a late attack from Leclerc after a safety car period triggered by McLaren’s Lando Norris crashing on lap 41.

“It was an incredible Grand Prix,” said Verstappen, who has won every race he has finished so far this season and was handed his winner’s trophy by Dolphins NFL quarterback great Dan Marino.

“(It was) very physical but I think we kept it exciting until the end.”

Leclerc was right on Verstappen’s tail with five laps remaining, with the safety car bunching up the pack, after struggling with the medium tyres on his opening stint.

“On the hard (tyres) we were very competitive and towards the end I thought I could get Max at one point but today they had the advantage in terms of pace,” said the Monegasque.

Perez tried to pass Sainz on lap 52 but overcooked his move, with the Spaniard forcing his way back in front and staying there.

George Russell continued his record of finishing every race so far in the top five, with Mercedes team mate and seven-times world champion Lewis Hamilton sixth.

Valtteri Bottas was seventh for Alfa Romeo with Alpine’s Esteban Ocon eighth in a stirring fight back after being unable to take part in Saturday’s qualifying due to a practice crash that forced the team to change his car’s chassis.

There was heartbreak for Mick Schumacher, who had been having his best race to date and looked like taking his first point in Formula One until he collided with Aston Martin’s Sebastian Vettel.

Vettel and team mate Lance Stroll both started from the pit lane after a fuel temperature problem stopped them from going to the grid.

Denial of responsibility! TechiLive.in is an automatic aggregator around the global media. All the content are available free on Internet. We have just arranged it in one platform for educational purpose only. In each content, the hyperlink to the primary source is specified. All trademarks belong to their rightful owners, all materials to their authors. If you are the owner of the content and do not want us to publish your materials on our website, please contact us by email – [email protected]. The content will be deleted within 24 hours.
AudioClosesCurrent AffairsGapLeclercMiamiNewsnews update
Share

How To Fix When Your iPhone Has No Service