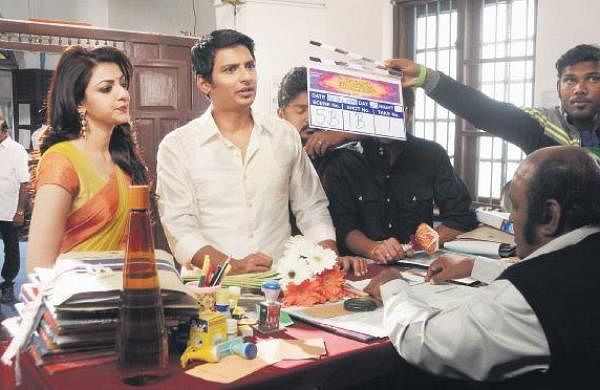 When did you realise cinema was your calling?

My father proposed to my mother in a theatre; so my fascination with films was natural. My elder brother wanted to get into the industry but he couldn’t, so he wanted me to do it. Interestingly, his wife is also in the industry as a makeup artist. When I was in my second year of college, I made up my mind that this is what I wanted to do.

What have you learned from your directors?

Though they are completely different from one another, all three directors I have worked with are very disciplined and punctual. Deekay sir’s plan of action is brilliant. He knows exactly what he wants and he always finishes the shoot at exactly the time he has planned.

He also taught me how to handle many artistes at the same time. Gireesaaya sir taught me a lot about post-production, especially editing. I handled art for Adithya Varma and sir had a clear idea of what he wanted.

To showcase the lead’s depression, we got into so much detailing and were even clear about the type of bong he uses, the rolling paper he uses, the alcohol he drinks, the dog he has, and even the art he creates with collected bottle corks. From Anbarivu, I learnt how to coordinate with artistes.

What’ the oddest or most memorable thing you have seen or done as an AD?

During the post-production of Adithya Varma, when I was busy with mixing late in the night, Vikram sir suddenly called me. He said he was done with that day’s shoot of Cobra and wanted to drop by to check on our progress.

Despite it being 3:30 am, he came and sat with Gireesaaya sir and me. A week later, on my birthday, Vikram sir sent me a voice note that was more than two minutes long. He called me one of the most hardworking people he had seen in his life and told me that he wished to see me go further.

Even during the success meet, he mentioned my hard work and coming from someone so dedicated, it meant a lot to me.

What’s one area of filmmaking you had a tough time with, but are better at now?

Dubbing was something I took time to understand – the different voice modulations that are required for different scenes, to be precise. Again, it was Vikram sir who taught me how much you can improve a scene in dubbing.

His inputs to dubbing the scenes in Adithya Varma, such as the one where Dhruv’s character laughs and cries at the same time, were phenomenal. Even for the crowd in scenes like the football match, we wrote lines and dubbed for them.

Similarly, while working on Kaatteri, I learnt the importance of prosthetic makeup. For the ghosts, apart from the CGI, in production itself, a certain level of perfection is required as far as makeup is concerned.

What is your take on present-day cinema?

It was believed that our audience only love commercial films. But the same audience are also the ones who welcome a film like Pariyerum Perumal or Asuran. Bajrangi Bhaijaan, Suryavamsam, Dhuruvangal Pathinaaru, Adithya Varma – my mom loved them all and I see her taste as that of today’s audience.

Tamil audience are ready to even watch silent films like Pesum Padam. On the other hand, people believe that producers only want what’s trending at the moment. But that’s not true either – they are open to doing any story as long as the script is good.

What’s one change you wish to see in Tamil cinema?

I wish to see more corporate players in the Tamil film industry. They are approachable and the scale they are ready to go to is much higher. They are the reason why web series have become a trend now and people are hooked to OTT platforms. I think they understand the needs of a script more than traditional producers who try to cut corners.

Who would be the dream cast and/or crew for your debut project?

I wish to work with Vikram sir. I can work with him comfortably because of my previous experience with him. Aside from being a good actor, he is also knowledgeable about what goes on behind the camera. He’s a complete actor.

Denial of responsibility! TechiLive.in is an automatic aggregator around the global media. All the content are available free on Internet. We have just arranged it in one platform for educational purpose only. In each content, the hyperlink to the primary source is specified. All trademarks belong to their rightful owners, all materials to their authors. If you are the owner of the content and do not want us to publish your materials on our website, please contact us by email – [email protected]. The content will be deleted within 24 hours.
Loading...
ActorAssistantAssistant directorAswin RaamcompleteDeekayDirectorentertainment news
0
Share

Give pass certificate, not marksheets for cancelled exams: UP Pvt Schools body

The silent question of breast cancer among transgender persons