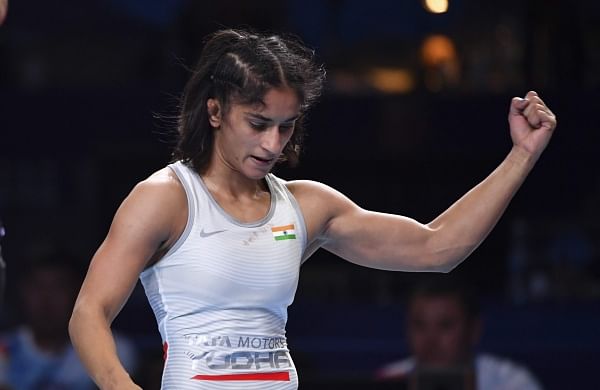 Vinesh Phogat out, Sangeeta in; juniors day out at the senior World Championship trials

NEW DELHI: There was no end to Vinesh Phogat’s woes as the struggling wrestler withdrew mid-way from the World Championship trials even as her cousin sister Sangeeta (62kg) made a stupendous comeback to mat after three years by sealing her spot in the Indian team, here on Tuesday.

All eyes were on Vinesh, who was suspended by the WFI earlier this month for indiscipline before being let off with a warning, but she looked vulnerable from the beginning.

Vinesh, one of the most successful woman wrestlers in India, was far from her dominant self in her 10-5 win in the opening bout against Anju in the 55kg category and did not take mat against Pinki, who eventually sealed her place for the Championships, scheduled to be held from October 2-10.

Anju employed the same head-lock technique that Belarus’ Vanesa had applied against Vinesh in the Tokyo Olympics, never allowing the the Asian champion play her game.

Much to everyone’s surprise, she did not take mat in the next round.

“I don’t know what happened to me. It’s not injury. I felt dizzy,” Vinesh said, sitting in the practice arena.

Vinesh had said she went blanked in her Tokyo Olympics quarterfinal and even struggled to complete take down move.

She was still smiling but could not hide her disappointment.

“My body is not the same. I am consulting a doctor for this (medical issue). Maybe the coronavirus infection has affected my body,” she said.

She first beat junior world championship silver medallist Sanju Devi by technical superiority and then beat Manisha 9-5 in the fast-paced final to claim her spot in Indian team in the 62kg category.

Her counter moves resembled that of Bajrang, who was in her coach corner during the bouts.

The 23-year-old had undergone a right knee surgery in 2018, missing the World Championship and then required another operation on her left knee in 2019 before the trials for the Asian championship.

“This performance give me confidence that I will be a medal contender at the Worlds. I could really do what I wanted to do. The training in USA for months and consistent support from Bajrang helped me,” Sangeeta told PTI.

“While my father (Mahavir Phogat) has trained me on the mat, Bajrang keeps me motivated and also chips in with his inputs,” she said adding that next year’s Asian Games and Commonwealth Games are also on “my radar”.

Bajrang said the result was beyond expectations.

“Honestly, we just wanted to see how her knees behave, if they hold. We did not expect to win. I just told her to give her best,” he said.

In the same 62kg category, Rio bronze medallist Sakshi Malik was knocked out by Manisha.

The youngsters, who recently competed and did well at the junior World Championships, outperformed many seniors.

As many as five of them booked their slots in the team ahead of the seniors.

Gourav Balian, who had also won a bronze, outwitted Narsingh Pancham Yadav in a fast-paced final.

Among women wrestlers, Anshu Malik was also not her best but still won the place in the 57kg with wins over Mansi (TSU) and senior pro Lalita (2-0).

“I have an issue with my left elbow, that’s why I could not play freely. I gained good experience in Tokyo though I could not do well. It’s just a start for me at the senior level, I will get better,” she said.

Denial of responsibility! TechiLive.in is an automatic aggregator around the global media. All the content are available free on Internet. We have just arranged it in one platform for educational purpose only. In each content, the hyperlink to the primary source is specified. All trademarks belong to their rightful owners, all materials to their authors. If you are the owner of the content and do not want us to publish your materials on our website, please contact us by email – [email protected]. The content will be deleted within 24 hours.
Loading...
ChampionshipDayjuniorsnews updatePhogatSangeetaSeniorsports news
Share