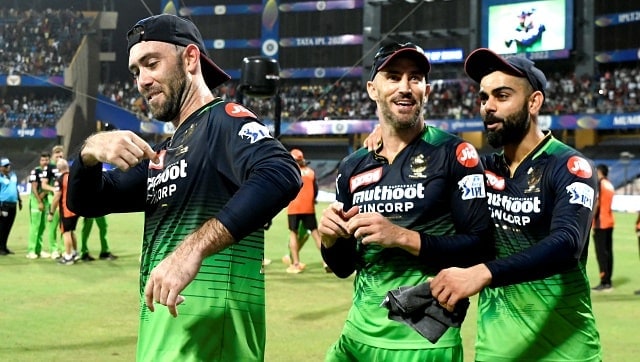 With the IPL 2022 charging down towards the finishing line, the distance between those who will or won’t make it is still tight. Even now, several franchises have a chance to scramble through, with a little bit of consistency.

However, in the case of teams like Royal Challengers Bangalore (RCB), it is more of a question of why they wouldn’t make it, given that they have everything a side needs to be in it to win it. RCB, and their iconic player Virat Kohli, need to get it done, and now, to make it to the qualifiers and who knows, even lift the IPL 2022 title.

Virat Kohli must get going as RCB look to seal playoffs berth. Sportzpics for IPL

With 14 points in the kitty with two matches to go, RCB really need to keep their string of wins alive and hopefully get to 18 points, which is fast becoming the magic mark.

There is no reason whatsoever that they would not get there. Not with the kinds of arsenal they possess.

Take their last match against Sunrisers Hyderabad (SRH) for example. Kohli’s golden duck notwithstanding, RCB found enough ammunition from skipper Faf du Plessis, Glenn Maxwell and the inimitable Dinesh Karthik, with Rajat Patidar coming in with a perfectly-timed partnership with the captain.

Maxwell has become effective with the ball as well, as was reflected in the SRH inning, as RCB were able to deploy as many as seven bowlers.

Top of that heap is Wanindu Hasaranga, who is now a serious challenger to Yuzvendra Chahal for the Purple Cap. With a sensational 5/18, the Sri Lankan now has 21 wickets from 12 matches, just two short of Chahal. He is definitely an ace up RCB’s sleeve.

With others like Josh Hazlewood, Mohammed Siraj, Harshal Patel and Shahbaz Ahmed in the line-up, this is one potent bowling line-up. Not to mention the bonus of Maxwell. What RCB needs is consistency with the bat.

Du Plessis and Kohli need to get their act together in a rush and an opening partnership of two batters who can take almost every attack to task is critical. With that kind of base, and with the others named to follow, there is no reason that RCB shouldn’t be daunting on a regular basis. Which brings us to the much-discussed issue of Virat Kohli.

The former RCB and India skipper evidently has not been having the best of times, irrespective of how the team has played. There is no doubting his contribution in the field – he has taken some fine catches and fielded like a tiger, not to mention his ability to get up the opponents’ nose – but his forte, his bat, has not essayed the thunderclaps it normally does.

Hesitant is possibly the best way to describe his IPL 2022 with the bat, with three golden ducks doing nothing at all to alleviate this feeling.

It would be easy to say that he is a professional and should forget the past performances, but hesitancy tends to be contagious, as is reflected from his betting even in the matches where he has scored runs.

The strike-rate is not Kohli at all, nor is the approach. This is surely RCB’s biggest headache.

So, to state the obvious, Kohli needs to hammer down on the opponents in RCB’s remaining two matches, shedding all his hesitancy and going in like there is no other way, as indeed there isn’t.

With 216 runs from 12 innings and a poor average of 19.64 and a strike rate of 111.34, the only way to go for Kohli is up. It surely cannot get much worse, especially if RCB play just two more matches.

There is a school of though which suggests that the ex-skipper should even go down the order instead of up, and be used as a finisher. This thought process is not without its merits. If he goes in at a time when technique is the last thing on his mind, and wields the willow as he pleases, it may just push him out of his current inertia.

This is also the time when a failure in an attempt to chase vital runs would not be construed as another poor outing. Quite something to think about.

With his colleagues like Du Plessis, Patidar, Maxwell and Karthik coming to the party, Kohli needs to shed his inhibitions and get on the floor. Once he gets his feet moving, there isn’t a better sight in contemporary cricket.

Denial of responsibility! TechiLive.in is an automatic aggregator around the global media. All the content are available free on Internet. We have just arranged it in one platform for educational purpose only. In each content, the hyperlink to the primary source is specified. All trademarks belong to their rightful owners, all materials to their authors. If you are the owner of the content and do not want us to publish your materials on our website, please contact us by email – [email protected]. The content will be deleted within 24 hours.
BangaloreChallengerscredentialsFirstcricketFirstpostKohliNewsnews update
Share