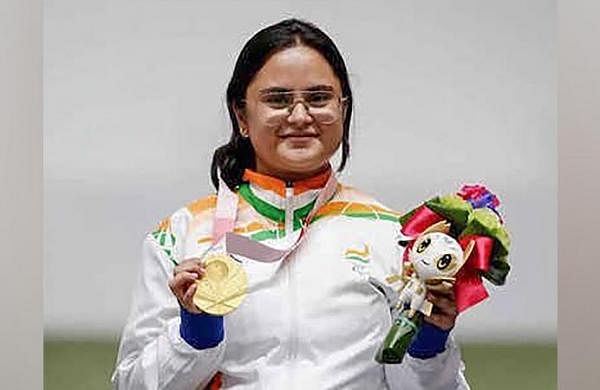 Visit to shooting range was meant to cheer up an angry girl: Avani Lekhara’s father Praveen

JAIPUR: When Avani Lekhara’s father Praveen took her to a shooting range for the first time in 2015, the purpose was to “cheer up an angry” girl and bring back a semblance of normalcy to her life after a car accident rendered her immobile.

Little did he know that this single move of his would eventually change the life of his daughter forever, culminating in a historic gold medal at the Tokyo Paralympics on Monday.

“Prior to the accident she was very active and had participated in every activity but the accident changed her life,” Praveen Lekhara told PTI.

“She was angry at her condition and hardly had a desire to talk to anyone. For a change, I used to take her to JDA shooting range in Jagatpura, Jaipur where she developed interest in shooting,” Lekhara said.

Paralysed waist down, those visits to the shooting range worked wonders as Lekhara started to get attracted to the sport and she found a purpose in life.

Buying his daughter the autobiography of Olympic champion shooter Abhinav Bindra — A Shot at History: My Obsessive Journey to Olympic Gold — was the next best thing he did for Lekhara.

She started reading the book and was instantly inspired by the story of India’s first individual gold medallist at the Olympics.

Since April 2015, she has been a regular visitor to the shooting range.

Lekhara, who sustained spinal cord injuries in a car accident in 2012, finished with a world record equalling total of 249.6, which is also a new Paralympic record.

Wheelchair-bound, initially she faced difficulties, and gun and shooting kit was also not available.

“However, her coach offered full cooperation and she started performing well. With her exemplary determination, she excelled in the game and won gold medal at the state level and bronze medal at national level in 2015.

“This was just the beginning and today, she has won the gold in Paralympics which too was very much expected of her,” Praveen said.

Lekhara senior has been flooded with phone calls ever since the news of his daughter bringing laurels to the country broke in the morning.

All this while a nondescript village (Devlen) in Karauli district witnessed celebrations after its resident Sundar Singh Gurjar won bronze medal in men’s javelin throw in Tokyo.

Gurjar practiced at the Sawai Man Singh Stadium in Jaipur under the supervision of his coach Mahaveer Saini.

“The entire village is happy about the achievement. Though he was sure of winning the gold medal, he missed,” Hariom Gurjar, his brother, said.

He said that most of the villagers had gathered at two places — at their house to watch the game on TV and at the temple where a special worship was being performed for Sundar’s success.

“Sweets were exchanged and the achievement was celebrated,” he said.

“Sundar is married and has two kids. One of them was born on the day of Janmasthmi last year and this year on Janmashtami, Sundar has brought laurels to the nation,” he pointed out.

Gurjar’s mother is the Sarpanch of the local gram panchayat.

Apart from Lekhara and Gurjar, javelin throwers Devendra Jhajharia, who has won a silver in Tokyo, also belongs to Rajasthan.

“The players of the state have brought laurels to the country and the state by winning medals, we are very proud of them,” Gehlot tweeted.

All the three athletes have already been appointed to the post of assistant conservator of forest (ACF) in the state forest department.

Denial of responsibility! TechiLive.in is an automatic aggregator around the global media. All the content are available free on Internet. We have just arranged it in one platform for educational purpose only. In each content, the hyperlink to the primary source is specified. All trademarks belong to their rightful owners, all materials to their authors. If you are the owner of the content and do not want us to publish your materials on our website, please contact us by email – [email protected]. The content will be deleted within 24 hours.
angryAvani LekharaCheerfathergirlAvaniLekharasMeantnews update
Share

A Letter From the Front Lines of Quarantining With Kids

Microsoft 365’s new security model: How to use phishing simulations and security mailboxes