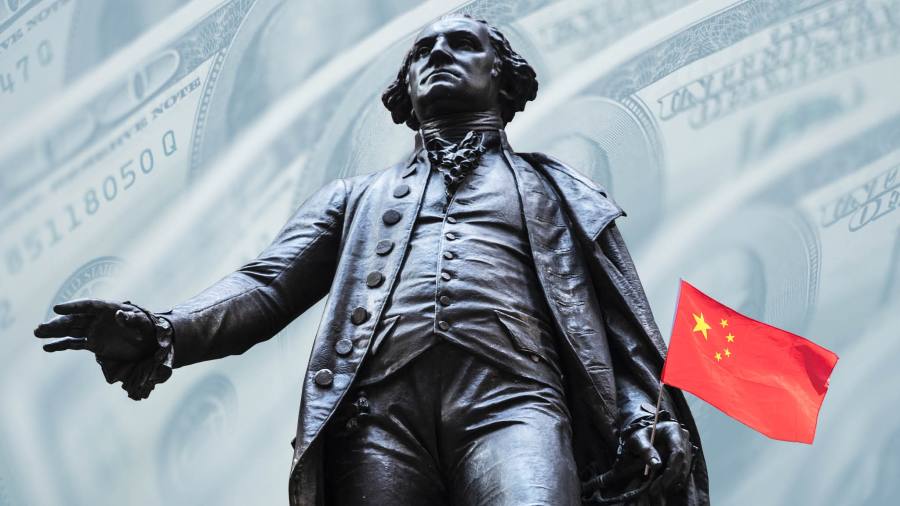 When the Biden administration announced a fresh investigation into the origins of the coronavirus outbreak in Wuhan on Tuesday, the Chinese reaction was swift and furious.

Zhao Lijian, foreign ministry spokesperson, accused the US of “political manipulation” and of “stigmatising” China — the sort of regular spat that has prompted growing comparisons to the cold war.

But just a day earlier, another announcement told a different story about the ties between the world’s two leading powers. Goldman Sachs, an emblem of the globally dominant American finance industry, unveiled a wealth partnership with the state-owned Industrial and Commercial Bank of China. The deal could allow the Wall Street firm to draw on the savings of hundreds of millions of the bank’s Chinese customers.

In an era that is increasingly defined by geopolitical competition and a push towards economic “decoupling”, American finance has never been closer to Chinese wealth.

Seduced by untapped savings and a growing asset management market, worth an estimated Rmb121.6tn ($18.9tn) last year, Wall Street’s most storied firms are embedding themselves more deeply than ever into the country.

In addition to Goldman Sachs, BlackRock said earlier this month it had received approval for a wealth management partnership with China Construction Bank, while JPMorgan Asset Management announced in March plans to invest $415m in China Merchants Bank’s wealth unit. From Europe, Amundi and Schroders have gained approvals for majority owned partnerships in wealth management.

“Within Goldman Sachs, we’re excited from top to bottom,” says Tuan Lam, head of client business for Asia ex-Japan at the company’s asset management arm. “We’ve obviously been thinking about China for quite a long time and, with the recent regulatory changes and the market changes, we just have a very high level of conviction around the opportunity.”

China, which on one measure now has more billionaires than the US, is opening its doors wider than ever to foreign firms. In the past two years, it has liberalised elements of its tightly controlled financial system and allowed US and European companies greater access. Although still wary about giving foreign institutions too large a role, the government is eager to draw on their expertise to help build a savings infrastructure that can help manage an impending demographic crisis driven by an ageing population.

Against that backdrop, some investors say the biggest risk is not getting into China quickly enough. But any great China gold rush is not without challenges. As with other key areas of the economy, finance is ultimately under the sway of an all-powerful Communist party that has ruled since 1949.

It also sits uneasily against the geopolitical backdrop, where tensions between China and the west have flared over issues from the coronavirus pandemic to technology, from Xinjiang to Taiwan. Domestic politics in the US, also, are more than ever driven by what President Joe Biden this year called the country’s most serious competitor.

Jake Sullivan, US national security adviser, summed up the new mood when he wrote in Foreign Policy magazine last year: “Why . . . should it be a US negotiating priority to open China’s financial system for Goldman Sachs?”

Jarvis Li, a 29-year-old analyst at a securities company in Shenzhen, cannot yet afford to buy a house. He hopes by putting his savings in stocks, funds and wealth management products he can at least outpace inflation.

“I like products that are safer,” he says, but adds that there are “too many choices” on the market.

Goldman Sachs’ new venture with ICBC, in which it will have a majority stake, aims to add more. Its savings products will initially target high net worth savers and in future could be offered to people like Li.

The recent flurry of new savings products is part of an ongoing push to expand investment options in a country where huge quantities of savings have historically sat in bank deposits or chased after speculative returns in the real estate market. Goldman Sachs estimates 60 per cent of all household assets were in property in 2020, and a further 24 per cent were in cash and deposits.

“It is a nation of savers, but the saving predominantly occurs in cash and real estate,” says Susan Chan, head of Asia at BlackRock, which now has approval to begin running a joint venture with CCB and Singapore’s state fund Temasek. “The capital markets, the infrastructure, the way they look at asset management, it’s still relatively young.”

For the likes of Goldman Sachs and BlackRock, wealth partnerships with Chinese banks offer vast distribution networks that will allow them to quickly sell their investment products to the country’s savers — especially those with a high net worth. ICBC has 680m retail customers, more than twice the entire US population.

China’s state-owned banking system, the largest in the world by assets, has for years offered “wealth management” products to its customers, typically as an alternative to deposits. But the industry has been riven by controversy — especially regarding its role in shadow finance and the promise of implicit guarantees to customers — and underwent dramatic reforms in 2018 that paved the way for greater foreign involvement.

While firms like Goldman have a long history in China, the recent reforms which have swept across the entire financial industry will allow them to expand much further.

“The government believes that foreign asset managers and foreign banks can represent a new sort of institutional investor, a new player, with best practice, a well established process and good standards,” says Xiaofeng Zhong, chair of greater China at European asset manager Amundi, which last year gained approval for the first majority foreign-owned wealth management joint venture. Its partnership with Bank of China has already launched over 20 products and gained “billions of dollars” in assets, he says.

“What’s really attracted us to the wealth management joint venture is for the first time it allows managers to more directly tap into those large wealth management savings pools that the big Chinese banks have built up over the years,” says Lieven Debruyne, global head of distribution at Schroders, which gained approval to partner with Bank of Communications in February.

In China, the wealth management sector is just one part of a jigsaw of savings initiatives — alongside an expansion in mutual fund businesses, which as of last year foreign firms such as JPMorgan can now fully own, and an evolution of its pension system.

Census data released this month showed its population was growing at the slowest rate in decades. Over-65s now make up 13.5 per cent of the population, compared to 8.9 per cent in 2010.

“The retirement crisis in China is bigger than in any other country in the world,” says BlackRock’s Chan. She adds that there an urgent need for China to help its population get into the investment mindset of, “I need to save for the future”.

A ‘fallacy of control’

For international investment firms, China is the world’s most clear-cut opportunity. While rallying markets have boosted their earnings in the short term, they face deep structural challenges in the highly mature markets of Europe and the US.

“Fundamentally, China is where the growth is,” says Richard Gray, a partner in wealth and asset management at EY.

But he also says that, while Chinese regulators and western firms have operated on a pragmatic basis so far, the biggest risk is the political environment changing. Gray says the foreign firms could eventually find themselves becoming “a forced seller of something you helped create” or have problems repatriating earnings, if they fall foul of regulators.

“Entering a different market, you’re very much at the mercy of the local regulators,” he says. “When you’re not part of the club, there is no political shield against regulators regulating you harder than some of the local players.”

In an example of how quickly the mood can change, last November’s initial public offering of Ant Group — once considered a fintech national champion — was pulled by the government at the last minute.

“China is too big a market to ignore, but at the back of your mind is the thought, ‘What can go wrong?’,” says Greggory Warren, senior equity analyst at Morningstar in the US. “In China, the rules and attitudes can change overnight.”

Peter Alexander, managing director at Z-Ben Advisors in Shanghai, an asset management consultancy, points to what he calls the “fallacy of control” when it comes to partnering with Chinese banks. He suggests that some foreign participants are driven by “short-term thinking” in the rush for distribution.

For their part, foreign asset managers often emphasise long-term shifts. A quota system means outflows from China are tightly controlled, but firms hope for greater flexibility to take the country’s savings to global markets. Goldman Sachs, which expects there to be $70tn of investable assets across the country’s households by 2030, plans to offer “cross border” products to its customers, while JPMorgan also points to its “global capability”.

Despite the business logic, Wall Street’s push into China presents a jarring contrast with the political mood in both countries.

In Washington, scrutiny of American finance’s alliance with China is rising. Republican senator Marco Rubio said this week that Wall Street was becoming “more tightly integrated with China than ever before”. And he said that “disconnect” was one of “our nation’s greatest vulnerabilities” in a confrontation “over who will determine the course of the 21st century”.

Previous administrations have pushed for greater access for US firms in China, reflected in last year’s phase one trade deal between the two countries. But it is still unclear how the new Biden administration will approach the issue, especially given his focus on “worker-centric” trade policy.

Eswar Prasad, a China finance expert at Cornell University, suggests that western firms are now “less starry-eyed” about doing business in the country, even as they continue to “lust” after its ever-wealthier citizens.

“These firms will have to undertake various contortions to avoid getting caught in the crossfire,” he says. While they still have “potent lobbying machines,” he adds, “their effectiveness in influencing US policy toward China has become highly constrained by the current political climate”.

That mood was on display at a congressional hearing on Thursday when financial chiefs were questioned about their China ties. David Solomon, Goldman Sachs chief executive, said the US-China relationship is “incredibly complex”.

Denial of responsibility! TechiLive.in is an automatic aggregator around the global media. All the content are available free on Internet. We have just arranged it in one platform for educational purpose only. In each content, the hyperlink to the primary source is specified. All trademarks belong to their rightful owners, all materials to their authors. If you are the owner of the content and do not want us to publish your materials on our website, please contact us by email – [email protected]. The content will be deleted within 24 hours.
Loading...
affairChinaEducation newsEducation updatelovenews updatestreetstechi live
0
Share