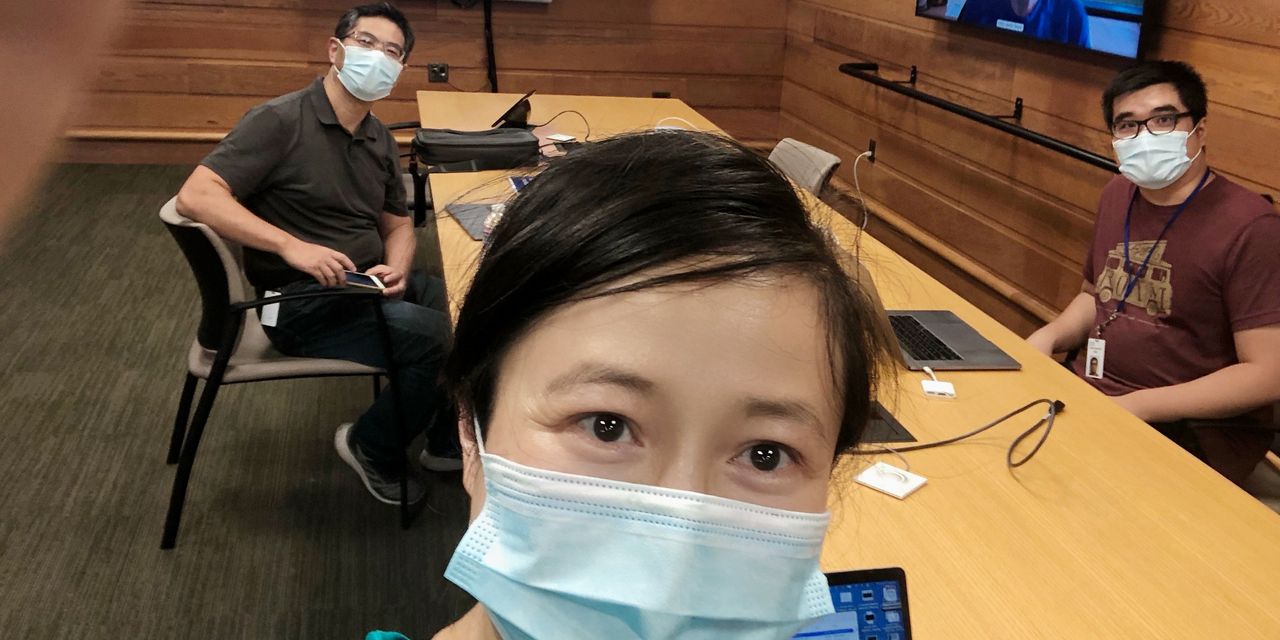 We Mastered Zoom From Home. Just Wait for Hybrid-Office Zoom.

Stephen Fleming sat stiffly on one end of a conference table, blinking at a laptop sitting a few feet away. Two colleagues were squished beside him, chair arms touching, trying to ensure they would all be captured in the viewfinder of the computer’s camera.

“We were close enough to rub noses,” says Mr. Fleming, an administrator at the University of Arizona, who kept his eyes studiously ahead, not wanting to risk turning his head and breathing too closely on his colleagues.

Instead, he stared at a large screen affixed to the far wall, where four other co-workers participating remotely were visible, and tried to look attentive. “I didn’t want them to feel left out,” he explains. “Meetings are about the little subtleties.”

During the pandemic, companies across the U.S. grew accustomed to meeting exclusively on video calls. But with more workers returning to their offices part-time, often on schedules with minimal overlap, many are finding themselves increasingly thrown into meetings that mix in-person and remote attendees.

For co-workers, that means navigating new, delicate social dances, and the accompanying hiccups, as workplaces experiment with different ways to ensure everyone can be seen and heard.

At a recent meeting in Kansas City, Mo., business development manager Ashley Pate was startled when she began to speak and found a camera sitting on a nearby ledge suddenly zooming in on her. The AI-equipped device had detected her voice and wanted to highlight her face for the benefit of remote colleagues dialing in on video. Startled, she let out a laugh and tried to seem unfazed.

When Yunyao Li, a senior research manager at IBM in Almaden, Calif., took part in a recent hybrid meeting, colleagues participating from home were displayed on large screens on two different walls, which she says helped create the feeling they were spread around the room.

“They were slightly bigger than us,” she says of the sizes of their heads on the screens. “I think it helped to really feel their presence.”

While all-remote meetings had pitfalls—people failing to mute or unmute, pet-and-kid cameos—organizers say hybrid meetings compound them, with even less room for error.

“Those of us Zooming in were left to stare at the coordinator’s face on her laptop,” Mr. Hartberg says. “Occasionally she’d turn it around for us to all look and see what was going on” in the rest of the room, he adds, but the effect was alienating and the sound poor. After 25 minutes, he left.

Given the friction of trying to mix virtual and in-person participants, hybrid meetings are mostly useful for status report-style updates, rather than robust discussions, says Josh Gordon, president of Full Spectrum Marketing in Akron, Ohio.

They are also a useful corrective to a person’s vanity, he says. At his company, the screen used to display remote participants is 85 inches: “It’s like, please brush your teeth and trim your nose hair, people, because everything is magnified.”

The funhouse mirror effect goes both ways. In Boston, union organizer Alejandra Tejeda co-led a recent meeting on Zoom of around 40 people, split between in-person and remote attendees. As Ms. Tejeda peered at the screen of her 13-inch Mac, to her amusement and dismay, she realized the Zoom box containing a video feed of in-person attendees was far too small to see anyone properly. “It was a bunch of tiny people. Their heads were probably the size of pencil heads,” she says.

Making matters worse, the microphone in-person attendees were using also malfunctioned, so that the “tiny pencil people” could be seen but not heard. “You have to laugh, really,” she says.

Many say they appreciate how mixed-format gatherings make it easier to increase attendance. In Scottsbluff, Neb., for example, pastor April Fiet says she is grateful that older parishioners who are at more of a health risk are able to Zoom into weekly Bible study meetings, while younger ones can attend in-person.

Still, it has been a bumpy adjustment. Some in-person parishioners have tended to slowly edge their chairs farther away from the camera to avoid being seen. Internet delays mean people accidentally cut each other off, leading to apologies and false starts.

“The hardest part is psychological,” she says, adding that as the group’s leader, she often doesn’t know where to look, and worries about alienating people, both present and remote.

No matter how good the technology is, some stumbles are inevitable, says Mike Tremblay, a transit agency planning director in Portland, Maine. In particular, he says, when videoconferencing into meetings with in-person colleagues, “everyone’s masking, so it’s hard to tell who’s talking sometimes.” And as a remote participant, he says, it can be awkward when he hears side chatter happening in the conference room, but isn’t able to smoothly jump in.

Still, he says, hybrid meetings do benefit from greater efficiency than many in-person meetings during the before times. Given how stilted they can feel, in his experience, Mr. Tremblay says, they tend to wrap up more swiftly: “We just want to get it done.”

Denial of responsibility! TechiLive.in is an automatic aggregator around the global media. All the content are available free on Internet. We have just arranged it in one platform for educational purpose only. In each content, the hyperlink to the primary source is specified. All trademarks belong to their rightful owners, all materials to their authors. If you are the owner of the content and do not want us to publish your materials on our website, please contact us by email – [email protected]. The content will be deleted within 24 hours.
C&E Industry News FilterconferencesConferences/ExhibitionsContent TypescorporateCorporate ChangesCorporate/Industrial Newsexhibitions
Share

BSNL may finally jump on the 4G bandwagon soon | Digit