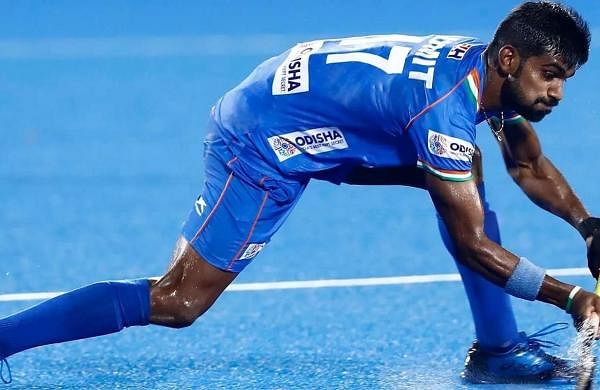 BENGALURU: Their remaining FIH Pro League away matches postponed due to the coronavirus-enforced travel ban, Indian hockey team midfielder Sumit on Wednesday said they have been closely analysing the games of other sides ahead of the Tokyo Olympics.

After the Argentina tour, India were supposed to play their FIH Pro League away matches against Great Britain, Spain and Germany this month but the ties were postponed due to travel restrictions imposed in the wake of a surge in COVID-19 cases.

Sumit, who is currently training with the men’s senior core group at the Sports Authority of India (SAI) centre here, said with no international matches around they are preparing for the Tokyo Games by watching current video footage of their opponents.

“We have been closely watching the teams who are currently playing their Pro League matches. We are analysing their style of play and structure to use them during our practice sessions. We create the same match scenarios or use a particular team’s structure during our internal practice games. It’s really effective, and we are trying to make the most out of it,” said Sumit, who has played 66 matches for the national side.

The 24-year-old midfielder got an opportunity to play for the Indian team on its recent tour of Argentina. He played his first high-level competition since India’s Pro League matches against the Netherlands in January 2020.

“I was a bit nervous initially because I was playing after a very long time. But, at the same time, I was very excited to be back in the team, and play against Olympic Champions Argentina,” he said about his comeback.

“I had suffered a wrist injury during the FIH Series Finals in Bhubaneswar in 2019, so I was out for almost six months. After recovering, I did get a chance to play during our Pro League matches against the Netherlands in Bhubaneswar in January 2020, but to be honest, I didn’t feel like I made a strong comeback to the team,” he said.

India’s home matches against New Zealand, which were to be held on May 9 and 30 in Bhubaneswar, were also postponed. “We didn’t get much competition due to the COVID-19 pandemic. Hence, there were mixed feelings on the Argentina tour initially, but I am really happy with the opportunity I got, and I feel I did well,” he added.

Speaking about the takeaways from the Argentina tour, Sumit said, “The results from the recent tour reflect that we are on the right path for Olympics. However, I think we can improve more on our attack. We should play attacking hockey, and try to convert the chances we get in the first three or five minutes of the game so that we can capitalise on the early leads.”

Denial of responsibility! TechiLive.in is an automatic aggregator around the global media. All the content are available free on Internet. We have just arranged it in one platform for educational purpose only. In each content, the hyperlink to the primary source is specified. All trademarks belong to their rightful owners, all materials to their authors. If you are the owner of the content and do not want us to publish your materials on our website, please contact us by email – [email protected]. The content will be deleted within 24 hours.
2021 OlympicsanalysingcloselyCovid19FIHFIH Pro LeagueGameshockey
Share