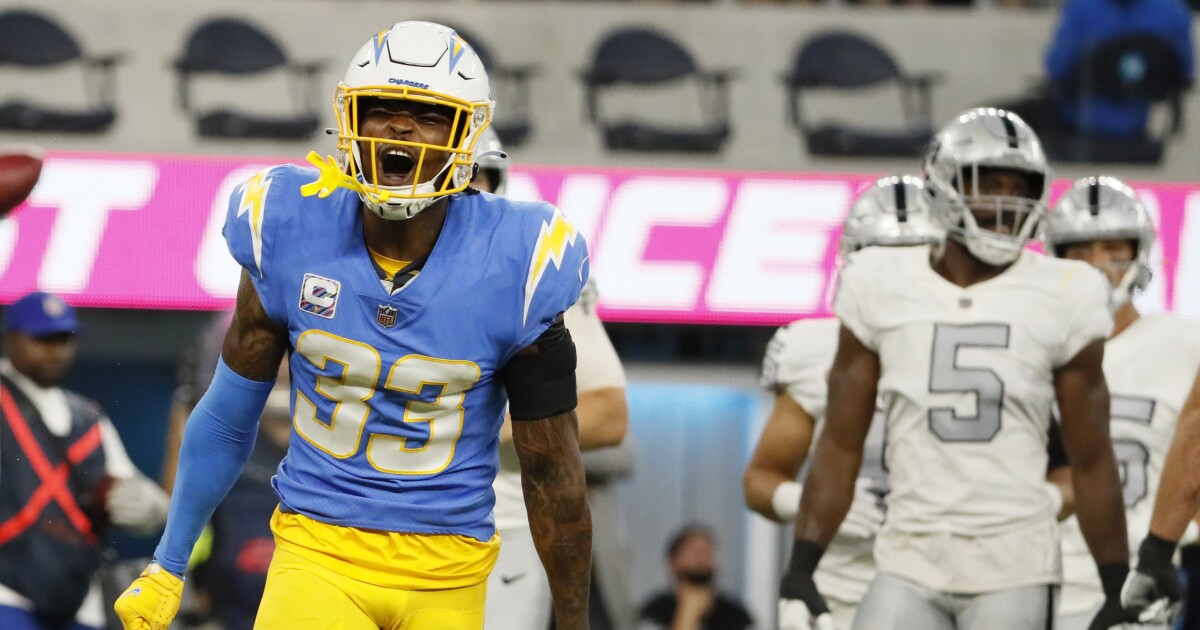 ‘We’re coming together’: Six takeaways from the Chargers’ win over Raiders

The Chargers improved to 3-1 with a 28-14 victory over Las Vegas on Monday night behind a smothering defense and another poised, productive effort from Justin Herbert.

Here are some takeaways:

At halftime, he had 52 yards and Las Vegas had just a single first down.

Chargers edge rusher Joey Bosa said the key was pressuring Carr, and he said it in a very emphatic, telling way.

“We knew once we hit him a few times, he really gets shook,” Bosa said. “You saw on C.C.’s [Christian Covington’s] sack. He was pretty much curling into a ball before we even got back there. So, great dude, great player. He’s been having a great year. But we know once you get pressure on him, he kind of shuts down and he’s not as effective with the crowded pocket.”

The Chargers sacked Carr four times, including a strip-sack by Bosa. In addition to Covington, Jerry Tillery and Kyler Fackrell also had sacks.

Carr finished 21 of 34 for 196 yards. He threw two touchdown passes and was intercepted by Derwin James Jr.

Covington’s sack — his first as a Charger — forced the Raiders to attempt a 52-yard field goal early in the fourth quarter. Daniel Carlson missed, and the Chargers put the game away with a subsequent touchdown drive.

“C.C. has been an awesome pickup,” Bosa said. “It’s great to have him on the team. The missed field goal was a huge, huge boost for us. After that, we kind of just put the foot on the pedal and finished.”

The Chargers entered as the NFL’s 32-ranked defense against the run. They didn’t exit that way.

With starting running back Josh Jacobs returning from an ankle injury, Las Vegas appeared poised to be the latest team to put up big rushing numbers against the Chargers.

Instead, Jacobs managed just 40 yards on 13 carries. The Raiders had 48 yards on 18 carries, an average of only 2.7 per attempt.

James finished with a team-high six tackles. Drue Tranquill replaced the injured Kenneth Murray Jr. (ankle) at inside linebacker and had five tackles, as did cornerback Michael Davis, who played his best game of the season.

The Chargers converted two more fourth downs, including a fourth-and-two from midfield on their final, game-deciding touchdown drive.

“In that game, fourth-and-two, that’s an advantage situation for us.” Staley said. “We knew the cover systems that would be played in that particular [down and distance] and felt really good about the play call.”

Staley praised the decisions of offensive coordinator Joe Lombardi, who calls the plays from the coaches’ booth.

He also expressed publicly what he continues to show just as publicly: belief in his young quarterback.

“Full trust, and that’s what he earns on a day-to-day basis with how hard he works and how he prepares and then how well he performs in those got-to-have-it situations,” Staley said of Herbert. “He’s got that cool, calm composure that affects everybody in a positive way, including me.”

Ekeler finished with a career-high 117 yards on 15 carries as the Chargers exerted their might on both sides of the ground game.

Staley said the plan was to try to run the ball more to take pressure off the pass protection. He explained that the Raiders are most effective getting after the quarterback when they know the pass is coming.

“I was really encouraged,” he said. “I felt like the physicality showed up late in the game. We were able to possess the ball and certainly run it in at the end… So very pleased.”

“I really liked our run game plan tonight,” Staley said. “I felt like we played really physical up front.”

Putting the ‘D’ in dominating

Staley’s reputation as a defensive wizard continues to show itself. The Chargers dominated the Raiders in the first half and ended up surrendering just two touchdowns to an offense that topped 30 points twice in its first three games.

“We’re coming together,” Staley said. “I mean, that’s the way we expect to play around here. … I felt like our guys were in a comfort zone tonight, and we executed that way. It was a big step for us.”

The coach talked about the “discovery process” that his defense — and team as a whole — is still going through as the Chargers adjust to new offensive and defensive schemes.

Even more encouraging than the start is what could be coming for this team. As the Chargers’ familiarity and comfort grow, they figure to only improve, meaning where they now might be nothing compared to where they’ll be in, say, December.

Bosa was asked about Staley’s defensive scheme and its impact.

“I think that and just his ability to bring us all with him,” he said. “He’s a great coach. He’s a really genuine guy. I just think there’s a team of guys in there that really have bought in to what what he’s teaching. We feel like he’s just part of us. We’re all playing for each other. So I think that’s more important than any scheme.”

Bosa and the officiating

Bosa picked up an unsportsmanlike penalty in the final four minutes after he was upset about not drawing a holding penalty on a Carr incompletion.

He was still fuming after the game.

The situation ended up having no impact on the score when, two plays later, James had his game-sealing interception.

“Obviously that’s on me,” Bosa said. “I should never lose my control like that. But these guys have got to do a better job because it’s been years of terrible, terrible miscalls, left and right. It’s really pathetic, honestly, but pathetic on me, too, for doing what I did.

“Call or not, I have to take a step back and just go to the next play. But, man, they just seem to not even have their eyes open half the time.”

Denial of responsibility! TechiLive.in is an automatic aggregator around the global media. All the content are available free on Internet. We have just arranged it in one platform for educational purpose only. In each content, the hyperlink to the primary source is specified. All trademarks belong to their rightful owners, all materials to their authors. If you are the owner of the content and do not want us to publish your materials on our website, please contact us by email – [email protected]. The content will be deleted within 24 hours.
Chargerscomingnews updateRaiderssports newssports updatetakeawaystechi live
Share