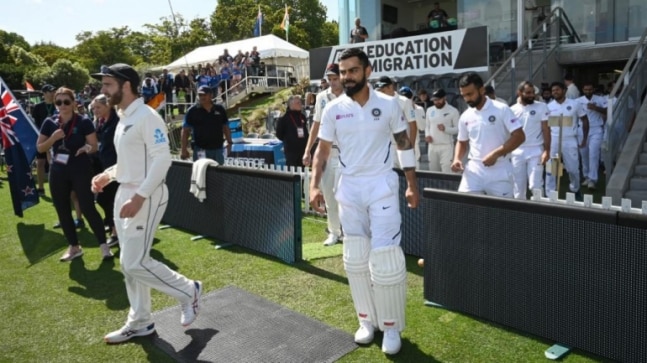 Former Pakistan captain Salman Butt feels there is no relevance to what Michael Vaughan said about the Virat Kohli and Kane Williamson in a recent interview. Vaughan stated that Williamson would have been the “greatest player in the world” if he was from India.

The former England captain went on to add that not calling Kohli the greatest is an open invitation to get “pelted” by his fans on social media.

But Salman Butt paid no heed to the 46-year-old’s comments, saying that Kohli’s statistics as a batsman is far superior to any other player in international cricket and therefore, comparing him with Williamson is a waste of time.

Kohli is the only batsman in the world who averages more than 50 in all three formats of international cricket, and is the only active player with more than 22,000 runs across formats. He is also third on the list of most international hundreds with 70 so far.

“Kohli belongs to a country which has a huge population. Obviously, he would have a bigger fanbase. On top of that, his performance is better too. Virat has 70 international tons at the moment, no other batsman from this era has that many.

And he has, for a long period, dominated the batting rankings because his performances have been outstanding. So I don’t understand what and where is the need to draw comparisons,” Butt said on his YouTube channel.

BUTT TAKES A JIBE AT VAUGHAN

Butt, who was jailed for his involvement in the 2010 spot-fixing scandal, went on to take a jibe at Vaughan by questioning his credibility as a batsman himself.

“And who has compared the two? Michael Vaughan. He was a brilliant captain for England, but the beauty at which he used to bat, his output wasn’t on par. He was a good Test batsman but Vaughan never scored a single century in ODIs. Now, as an opener, if you haven’t scored a century, it’s not worth discussion. It’s just that he has a knack of saying things that stir up a debate. Besides, people have a lot of time to stretch a topic.

“Williamson is great. He’s a top-class batsman and the best in the world. There is no doubt. Williamson may take the points in terms of captaincy, but he (Vaughan) hasn’t discussed captaincy. In terms of players, there is a huge cap. Kohli’s stats and performance and the way he has won India matches, especially chasing, it’s outstanding. Since the time both are playing, no one has been as consistent as Kohli. What Vaughan has said is irrelevant,” Butt said.

The two modern-day greats of the game will be facing each other in the final of World Test Championship (WTC) from June 18 in Southampton.

Denial of responsibility! TechiLive.in is an automatic aggregator around the global media. All the content are available free on Internet. We have just arranged it in one platform for educational purpose only. In each content, the hyperlink to the primary source is specified. All trademarks belong to their rightful owners, all materials to their authors. If you are the owner of the content and do not want us to publish your materials on our website, please contact us by email – [email protected]. The content will be deleted within 24 hours.
ButtcaptainscomparisonenglandirrelevantKohliWilliamsonMichaelnews update
0
Share