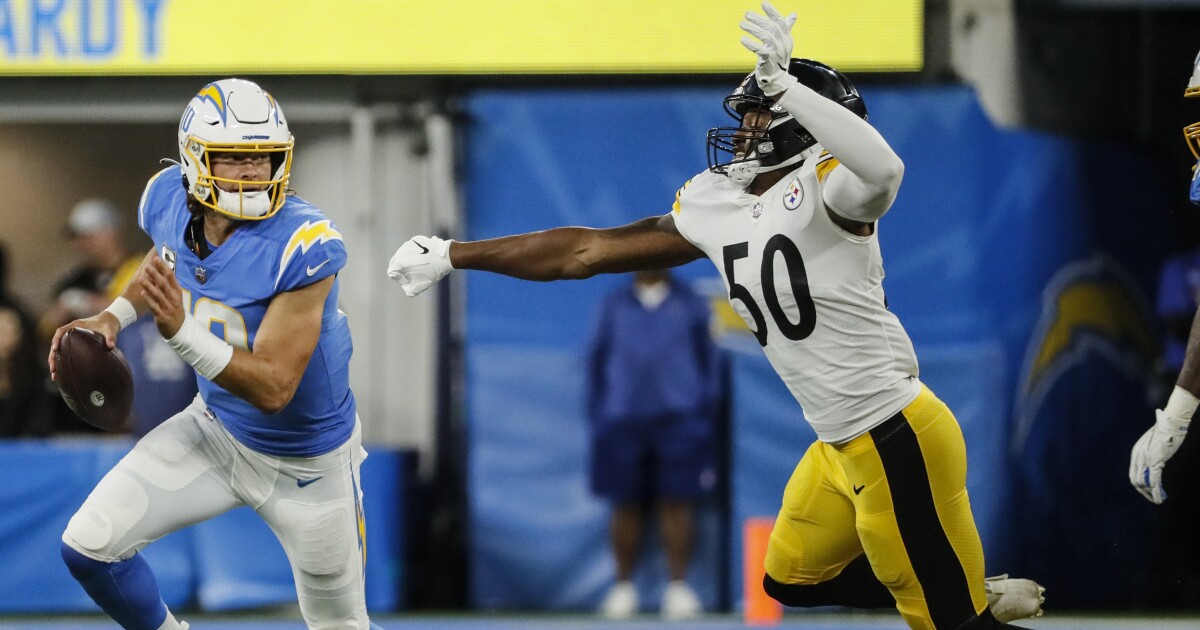 What we learned from Chargers’ 41-37 victory over the Steelers

The Chargers beat Pittsburgh 41-37 Sunday night in a game that featured a combined 41 points in the fourth quarter.

They improved to 6-4 and are a half-game behind AFC West-leading Kansas City. If the playoffs began this week, the Chargers would be the conference’s No. 6 seed.

Here are six takeaways from this crazy win:

In five of the Chargers’ six victories, they’ve trailed in the fourth quarter. They blew a 17-point lead against the Steelers but then came back after falling behind by three.

The ability to pull out wins late hasn’t always been a hallmark of this franchise.

The 2018 Chargers rode a series of dramatic fourth-quarter wins into the playoffs, where they won at Baltimore before losing at New England in the divisional round.

Quarterback Justin Herbert was still at Oregon that season, but he said new coach Brandon Staley has altered the mentality and belief around this year’s Chargers compared with the 2020 version.

“As soon as he was hired here, he built relationships and he reached out to guys and said, ‘This Chargers team, it can’t be the same as it’s been. We have to be able to win these close games,’ ” Herbert said. “They all believe, and I think it all starts with that.”

Said Staley: “There’s no better feeling like that as a team, knowing that you had what it took. That’s what the NFL is all about. I feel like we’ve shown real stuff through 10 games. This game was one of my favorites, for sure.”

The Chargers have been looking for a second running back to emerge after Ekeler, who has been playing more snaps than ever in his career.

For one game, at least, Herbert became that second ground option. He finished with a career-high 90 yards in nine carries. That total also is a franchise record for a quarterback.

Along with his 382 yards passing, Herbert became the first player in NFL history to have as many as 350 yards passing and 90 yards rushing in a game.

Staley explained that Herbert was able to take advantage of Pittsburgh’s man-to-man coverage schemes that left Herbert on his own.

“The one guy that they’re not accounting for is the quarterback,” Staley said. “When it’s drained out and he sees daylight, now he becomes a tailback.”

Herbert converted third downs with runs of 36, 18 and 13 yards. He had another 18-yard gain on first down. A 15-yard scramble that would have converted another third down was nullified by a holding penalty on Corey Linsley.

“He’s just got real instincts,” Staley said. “He knows when there’s daylight and then he runs to it. What that does is it forces the defense to change and that’s a good thing. They can’t play those coverages against us or, if they do, they better account for him.”

Steelers defensive tackle Cameron Heyward was allowed to remain in the game despite throwing a punch into Herbert’s stomach after one play. He was called for unnecessary roughness.

Asked about the incident afterward, Staley said, “I think that the truth will express itself from the video.”

NFL Senior Vice President of Officiating Walt Anderson, in a pool report, explained that the league reviewed the situation but decided no additional penalty was warranted.

“It just didn’t look like it rose to the level of a foul that would result in a disqualification,” he said.

When meeting with reporters immediately after the game, Herbert said he hadn’t seen a replay. He largely dismissed the exchange.

Andrew Brown, a veteran defensive lineman promoted from the practice squad Saturday, also played a role as the team had major holes to fill and did so successfully.

“Those guys deserve so much praise for the way they competed tonight,” Staley said. “I’m so proud of them. They played with the warrior spirit that we expect. It was a tremendous performance by that group.”

The Steelers finished with 55 yards in 18 carries, an average of only 3.1 yards per attempt.

The Chargers’ run defense has improved during the last month after opening the season poorly. They entered Sunday still ranked last in the league.

On Sunday, they were without starters Linval Joseph because of a shoulder injury and Jerry Tillery, who remains on the COVID-19 reserve list. They also were missing backup Christian Covington (COVID list).

Austin living out his fantasies

But he also had a pivotal blitz pickup on the game-winning 53-yard touchdown pass from Herbert to Mike Williams. Lined up to Herbert’s right, Ekeler moved over and cut down cornerback Arthur Maulet, who was coming from Herbert’s left.

Ekeler credited his performance — as well as the Chargers’ showing as a whole — to a week of practice that he said prepared the group well. He pointed to his blitz pickup as an example.

“That’s why I’m talking about practice,” he said. “Seeing that pressure was like, ‘Oh, we’ve already been here. I’ve already seen this pressure in practice. I’m gonna come across and I’m gonna block him and we’re gonna hit Mike. He’s gonna score a touchdown.’ Boom, just like practice.”

With his four scores, Ekeler had another big day in fantasy football. He drafted himself on one of his teams and regularly provides updates on how he’s doing.

“It’s going to help his fantasy and all that,” Staley said. “He’s into that. He’s got this lucrative career that he’s building. Today was a good step in helping that empire.”

Much like during their visit to Dignity Health Sports Park in 2019, the Steelers brought a lot of fans with them to SoFi Stadium.

Both teams seemed to struggle with the noise at times.

“It just tightened our focus,” Staley said. “That’s all it did. We were prepared for it. We deal in reality here. We knew that this crowd was going to show up. Our players were ready for that environment and they thrived in it.”

Ekeler praised the Chargers fans who attended and said he’s OK with any atmosphere that’s boisterous, even adding, “It’s us against everybody in here.”

“It just hasn’t been all Chargers and that’s fine,” Ekeler said. “Because to me, it’s really just energy. I love the energy when it’s loud. It’s great. I love to hear even when it’s their fans yelling. I’m like, ‘Yeah, let’s go.’ For me, it’s actually giving me a little bit more of an edge.”

Denial of responsibility! TechiLive.in is an automatic aggregator around the global media. All the content are available free on Internet. We have just arranged it in one platform for educational purpose only. In each content, the hyperlink to the primary source is specified. All trademarks belong to their rightful owners, all materials to their authors. If you are the owner of the content and do not want us to publish your materials on our website, please contact us by email – [email protected]. The content will be deleted within 24 hours.
ChargersLearnednews updatesports newssports updateSteelerstechi livevictory
Share

Elizabeth Holmes trial: What she is accused of doing.