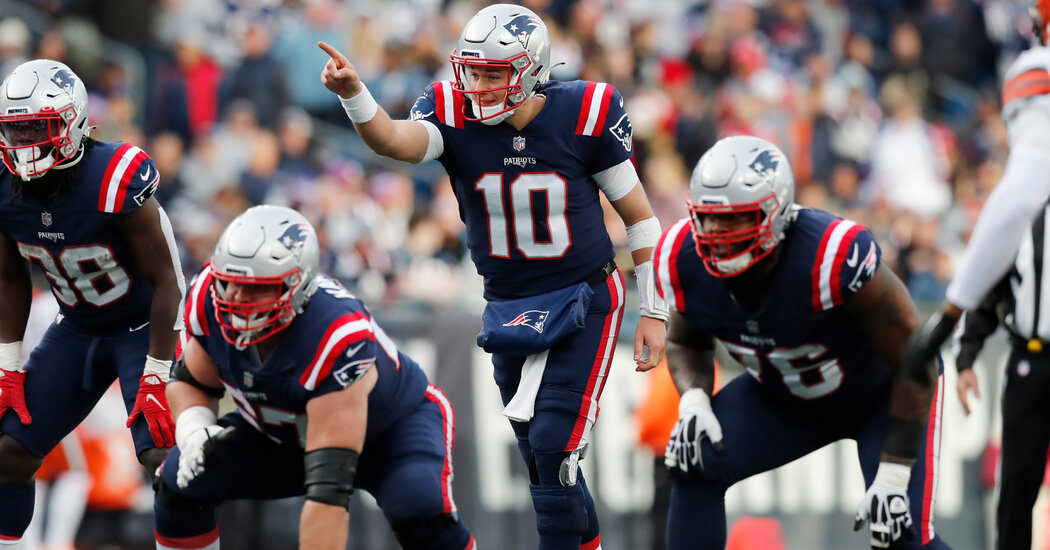 The N.F.L. draft generates months of needless hype around the selection of college athletes into the pros, turning observers into pseudo-general managers by spring.

His numbers in 2020 were immaculate: He threw 41 touchdowns to only four picks, went 13-0 and won a national title. Yet there was no singular physical trait that signaled what his N.F.L. impact could be. No highlight-reel athleticism. No transcendent improvisation. No throw-it-over-them-thar-mountains arm. At 6-foot-2, 215 pounds, Jones had a Dad Bod, not Trey Lance’s upside, Justin Field’s toughness or Trevor Lawrence’s golden locks.

Jones dropped into the Patriots’ hands at No. 15 in the 2021 draft, becoming the last quarterback taken in the first round, seemingly a sign that Coach Bill Belichick had a project to tinker with over time.

Ten weeks into this N.F.L. season, and after Jones led New England’s 45-7 rout of the Cleveland Browns, this much is clear:

Mac Jones is ready to toss his training wheels.

Sunday was Jones’s best performance to date and it came against a Browns defense that had physically punished the 2020 No. 1 overall pick, Joe Burrow, just one week ago. Against Cleveland, Jones completed 19 of 23 passes for 198 yards with three touchdowns, no interceptions and a near-perfect 142.1 passer rating in a win that muddies an already ultra-clogged A.F.C.

Jones’s evolution from caretaker to playmaker has a lot to do with his situation and the way the stars have aligned around him. When he was drafted in April, Jones looked to back up Cam Newton, but he competed in training camp, making it easy to part ways with Newton before the season started.

Belichick spent heavily on free agents, his dizzying string of deals making clear that he intended to compete not rebuild. Those signees validated that call in Sunday’s game. Edge rusher Matthew Judon — who inked a four-year, $56 million deal in the spring — had three quarterback hits Sunday and has 9.5 sacks this season. Tight end Hunter Henry, who inked a deal worth $37.5 million over three years, caught two touchdowns. Receiver Kendrick Bourne (three years, $15 million) had 141 total yards.

With starting running back Damien Harris (concussion) out, the rookie Rhamondre Stevenson blasted away for 100 yards on 20 bruising carries.

Since losing heartbreakers to the Tampa Bay Buccaneers and the Dallas Cowboys, the Patriots (6-4) have won four games in a row to draw within a half game of the Buffalo Bills (6-3), whom they will face twice in December.

The mystifying struggles of Kansas City star Patrick Mahomes, combined with the Bills’ loss to the Jacksonville Jaguars in Week 9, the Baltimore Ravens’ loss to the Miami Dolphins on Thursday and the Tennessee Titans’ human freight train, Derrick Henry, breaking his foot, have all threatened the expected order of the A.F.C., leaving a window for Jones to be an unlikely chaos agent.

Jones’s calling card has been his robotic accuracy: He completed 77.4 percent of his passes his final year at Alabama and rarely misses in the pros. The ball placement on his first quarter touchdown to Henry, a fade, was perfect and pulled the Patriots to a 7-7 tie.

But Jones has also been more willing to drive it downfield, too, pinpointing a 23-yard touchdown pass to Bourne between two defenders for his second score.

Midway through the third quarter, Jones feathered a throw over Henry’s shoulder on second-and-5 for a 19-yard gain. Four plays later, Stevenson rammed through the line for a touchdown that put the Patriots up, 31-7.

Lawrence, Zach Wilson, Lance and Fields, the four quarterbacks taken ahead of Jones, may end up having better careers, but as Sunday’s blowout raged on, Jones made the sort of subtle throw not yet seen from the others. On third-and-goal from the Browns’ 3-yard line, Jones looked left to hold Browns safety Ronnie Harrison Jr. then quickly whipped right to hit Henry on a slant for another score.

And there’s another set of circumstances that have created an environment for Jones to thrive: Defenses have had to adjust to the elite quarterbacks who have terrorized them in recent seasons.

The leaguewide obsession with eliminating 30-, 40-, and 50-yard plays means practically all teams prop two safeties deep, forcing quarterbacks to build drives across 10 to 15 plays. Mahomes, for one, resembles a completely different player this season, and is on pace to exceed his career-high 12 interceptions (he has 10 so far).

Belichick’s Patriots have no interest in letting Jones heave it deep, perfectly content to run the ball and make defenses load up the box. Only now, Jones is ready to take advantage.

The Patriots keep opening up their playbook a little more each week, and Belichick’s teams only improve as the weather turns colder. Jones’s performance Sunday could be a scary warning to the rest of the A.F.C.

Tampa Bay is at another crossroads.

When Tampa Bay hosts the Giants on Monday Night Football next week, Tampa Bay will have gone nearly a full month without a win.

In a 29-19 loss to the Washington Football Team on Sunday, Tom Brady threw two first-quarter interceptions to one of the league’s worst pass defenses. The second was a particularly puzzling miss on first-and-10, where it looked as if Brady and receiver Mike Evans expected different routes.

Outside of one 40-yard touchdown pass to Evans in the fourth quarter that closed the Buccaneers’ deficit to four, at 23-19, Brady averaged a meager 5.5 yards per pass attempt. That’s an unthinkably low number for an offense overflowing with talent, even without Antonio Brown and Rob Gronkowski.

The other quarterback on the field, Taylor Heinicke, proved clutch on a marathon 19-play, 80-yard drive that melted 10 minutes and 26 seconds off the clock and kept Brady on the sideline for nearly the rest of the quarter. The key play was Heinicke’s third-and-4 laser to Adam Humphries at Tampa Bay’s 25-yard line that kept the drive alive with 3:13 to go. By the time running back Antonio Gibson punched in a touchdown to put Washington up by two scores, only 29 seconds remained.

The Buccaneers (6-3) have been here before. Last season, they were 6-3, and then 7-5, before turning on the jets down the stretch.

This year’s N.F.C. South is a logjam, and if we’ve learned anything in 2021, it’s to expect every team to get hit with a shocking loss at some point. Don’t expect a Tom Brady-led team to take another.

Cowboys 43, Falcons 3: Atlanta may come to regret only pulling the plug on Coach Dan Quinn’s tenure, rather than deciding to also replace quarterback Matt Ryan in the draft. Ryan completed all of nine passes (on 21 attempts) in the loss.

Colts 23, Jaguars 17: With Henry sidelined Jonathan Taylor has emerged as the best running back in football this season. Taylor knows exactly where lanes will develop and parlayed that knack to finish with 116 yards and one touchdown. The Colts (5-5) are still thinking playoffs.

Bills 45, Jets 17: The Mike White hype officially died. Another quarterback who supplied Jets fans with a couple weeks of cheap thrills, it turns out, isn’t very good against a top defense. White was abysmal (four interceptions) and Josh Allen was not, throwing for 366 yards and two touchdowns on 21 of 28 passing.

Steelers 16, Lions 16 (overtime): Ben Roethlisberger was a late scratch after testing positive for Covid-19, and Pittsburgh was also without receiver Chase Claypool (toe). Steelers tight end Pat Freiermuth fumbled in overtime with Pittsburgh at the edge of field goal range, and the Lions did not lose at Heinz Field.

Titans 23, Saints 21: At the end of the first half, an end zone interception by Saints safety Marcus Williams was wiped off the board when linebacker Kaden Elliss received an inexplicable roughing the passer penalty. Tennessee grinded out a win, holding off a fourth-quarter rally from the Saints, who played without five offensive starters.

Denial of responsibility! TechiLive.in is an automatic aggregator around the global media. All the content are available free on Internet. We have just arranged it in one platform for educational purpose only. In each content, the hyperlink to the primary source is specified. All trademarks belong to their rightful owners, all materials to their authors. If you are the owner of the content and do not want us to publish your materials on our website, please contact us by email – [email protected]. The content will be deleted within 24 hours.
Learnednews updateNFLsports newssports updatetechi liveweek
Share