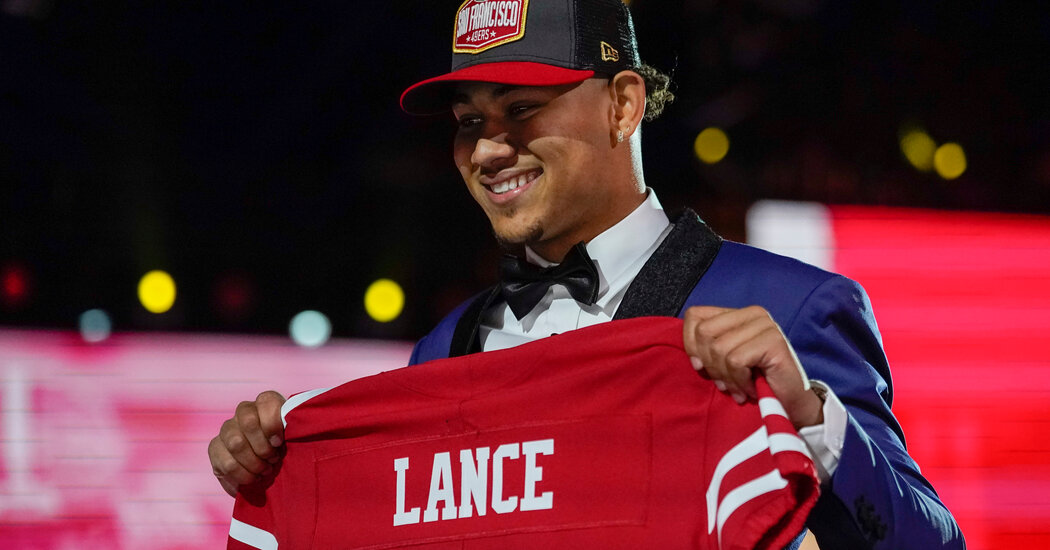 The first round of the 2021 N.F.L. draft proceeded on Thursday night according to the league’s strict hierarchy: Quarterbacks came first, followed by those who catch passes from them and protect them, with the defenders tasked with stopping them bringing up the rear.

And just to add some extra drama to the proceedings, a member of the league’s quarterback aristocracy did his best to upstage the newcomers.

For the first time since 1999, quarterbacks were selected with the top three picks: Clemson’s Trevor Lawrence by the Jacksonville Jaguars at No. 1, Brigham Young’s Zach Wilson by the Jets at No. 2, and North Dakota State’s Trey Lance by the San Francisco 49ers at No. 3.

The Lawrence and Wilson selections were foregone conclusions weeks ago. San Francisco’s choice of Lance over Alabama’s Mac Jones or Ohio State’s Justin Fields, on the other hand, had been a closely guarded secret.

Lance led the Bison to the Football Championship Subdivision national championship in 2019, throwing 28 touchdowns and zero interceptions against a much lower caliber of competition than Fields and Jones faced in their Power 5 conferences. He played only one game in 2020 because of coronavirus-related postponements and cancellations before declaring for the draft. A coach of Kyle Shanahan’s insight, however, can no doubt accurately evaluate a small-program prospect with limited playing time.

Lance will replace Jimmy Garoppolo, the small-program prospect with limited playing time whom Shanahan’s 49ers traded for in 2017, lavishly overpaid and eventually grew disenchanted with.

Fields, who led the Buckeyes to consecutive College Football Playoff appearances, dropped to the Chicago Bears, who traded up to draft him with the 11th pick. He is expected to quickly supplant Andy Dalton and Nick Foles, the N.F.L.’s versions of Art Garfunkel and John Oates.

The New England Patriots later selected Jones with the 15th overall pick. Jones led the Crimson Tide to the national championship in 2020 under nearly ideal conditions; five of his college teammates were selected among the draft’s first 24 picks. Now he joins one the most successful American sports franchises of the 21st century. Some guys have all the luck.

Tim Couch, Donovan McNabb and Akili Smith were the last quarterbacks to be selected with the top-three selections in an N.F.L. draft. Only McNabb had a noteworthy career, which is a reminder that top quarterback prospects usually end up at the mercy of perennially dysfunctional franchises like the Cincinnati Bengals and Cleveland Browns. Or, in this year’s case, the Jaguars and the Jets.

Receivers great and small were embraced.

After the quarterbacks came a run of pass catchers.

The Atlanta Falcons selected tight end Kyle Pitts, who caught 12 touchdown passes in eight games for Florida last year, at No. 4. The highest-drafted tight end in history, Pitts is expected to revolutionize the way N.F.L. offenses use tight ends, just as Kellen Winslow, Tony Gonzalez, Rob Gronkowski, George Kittle, Travis Kelce and many others revolutionized the position over the last 50 years. Apparently, the tight end position has undergone as many revolutions as 19th century Italy.

The Cincinnati Bengals selected Louisiana State wide receiver Ja’Marr Chase with the fifth pick, reuniting him with Joe Burrow, Chase’s college quarterback and the top pick in last year’s draft. If the Bengals transform into an L.S.U. alumni team, it will at least give them an identity for the first time since Boomer Esiason left in 1993.

The speedy Alabama wide receiver Jaylen Waddle joined the Miami Dolphins with the next pick, No. 6 over all, leaping ahead of more-accomplished teammate DeVonta Smith, who was selected by the Philadelphia Eagles with the 10th pick.

Smith is nicknamed Slim Reaper, which sounds like the world’s only Eminem/Iron Maiden tribute band but refers instead to the fact that Smith reportedly weighs around 166 pounds, a few Waffle House breakfasts shy of the minimum N.F.L. threshold. Smith should have carried the 45-pound Heisman Trophy he won last season onto a scale with him to put evaluators more at ease.

Like Chase, Waddle and Smith will be reunited with their college quarterbacks Tua Tagovailoa (in Miami) and Jalen Hurts (in Philadelphia). But it’s not really noteworthy when that sort of thing happens to Alabama players.

Cornerbacks: The next generation.

By the time N.F.L. teams got around to drafting some defenders, their best choices turned out to be cornerbacks with famous fathers.

The Carolina Panthers selected Jaycee Horn (South Carolina) with the eighth pick. Horn’s father, Joe Horn, was a standout wide receiver best known for using a cellphone as a prop in a touchdown celebration against the Giants in 2003. Horn used a flip phone, retroactively making the gag a “dad joke.”

Patrick Surtain II (Alabama) joined the Denver Broncos with the ninth pick. His father played for the great Miami Dolphins defenses of the early 2000s, which are not well remembered mostly because their offenses were dreadful.

Other second-generation cornerbacks will be drafted in later rounds, including Florida State’s Asante Samuel Jr., whose dad allowed an Eli Manning interception to bounce off his hands in the fourth quarter of Super Bowl XLII, making him the only New England Patriots player eligible for the Giants’ Ring of Honor.

Leaping forward and trading back.

The Jets traded up to the 14th pick from the 23rd pick (acquired from the Seattle Seahawks in last year’s Jamal Adams deal) to select Southern Cal offensive lineman Alijah Vera-Tucker, who will provide some insurance against Wilson’s enduring too many early-career hits the way the last umpteen Jets quarterback prospects did.

As for the Giants, General Manager Dave Gettleman opted to trade down in the first round for the first time in his long career, sliding down from the 11th pick to net an extra first-round pick in 2022, plus change. In their adjusted spot at No. 20, the Giants selected the Florida all-purpose rusher-receiver Kadarius Toney.

Gettleman said last week that he had always been amenable to trading down, but the price was never right. “I don’t want to get fleeced,” he said.

No N.F.L. personality sounds more like a crotchety uncle haggling at a used car dealership than Gettleman, but he appears to have struck a shrewd deal this time.

A report by ESPN’s Adam Schefter that a disgruntled Aaron Rodgers does not want to return to the Green Bay Packers sent shock waves across the league in the hours before the draft. Rodgers, the reigning most valuable player and a recent “Jeopardy!” guest host, was not-so-secretly miffed when the Packers drafted his potential replacement, Jordan Love, in last year’s first round and by other organizational decisions.

The Packers could have selected a wide receiver with the 29th pick, which would have been the draft-day equivalent of a diamond brooch and a tearful apology. Instead, they chose Georgia cornerback Eric Stokes.

While the Rodgers situation is still developing, few teams have the resources to trade for him. And if Rodgers chooses to retire, “Jeopardy!” would be better off hiring LeVar Burton.

Denial of responsibility! TechiLive.in is an automatic aggregator around the global media. All the content are available free on Internet. We have just arranged it in one platform for educational purpose only. In each content, the hyperlink to the primary source is specified. All trademarks belong to their rightful owners, all materials to their authors. If you are the owner of the content and do not want us to publish your materials on our website, please contact us by email – [email protected]. The content will be deleted within 24 hours.
Loading...
DraftLearnednews updateNFLsports newssports updatetechi live
0
Share

Your Call May Be Recorded (and Analyzed by a Bot)