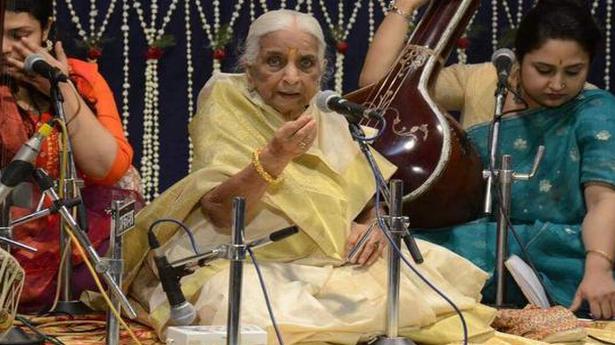 For the second year in a row, one of the most popular and eagerly awaited classical music and dance festivals, Sankat Mochan of Benaras was held online, from May 1 to 6. From the familiar open air temple courtyard, the anchor made announcements; some live performances by local artistes were recorded there, while artistes from across the country sent their recorded haazris (a term used for performances at this festival). The mahant of the Sankat Mochan temple, Prof. Vishwambhar Nath Mishra, said, “We thought this year we could revert to physical concerts, but it was not to be.”

Music concerts at this temple have been a way of life for decades now, and three generations of mahants have themselves been musicians.

In its 97th year, the annual festival holds all-night concerts for six nights. The music lovers of Benaras make it a point not to miss this feast, even switching off their phones for the duration! For the participating artistes, who perform gratis, the highpoint is the unique way in which the audience here expresses its appreciation — with both hands raised and with cries of ‘Har Har Mahadev.’ The informal ambience with the audience sitting all around the stage adds to the festival’s charm.

For many artistes, Sankat Mochan is an annual pilgrimage. Pt. Jasraj and his team used to stay for up to a week at the temple to participate. Several of his disciples continue to be regular participants.

Many recall Pt. Jasraj’s early morning visits to the Vishwanath temple after his dawn seva at Sankat Mochan, where he would sing impromptu. The Benaras-born Pt. Ravi Shankar maintained his links with the temple; and his disciples too continue to perform annually here, including Vishwa Mohan Bhatt, Tarun Bhattacharya, and Ronu Mazumdar. Pt. Rajan and Sajan Mishra began their musical career with a concert at Sankat Mochan.

The families of many artistes boast of long association with the temple, such as tabla player Rahul Mishra (great-grandson of Pt. Anokhe Lal Mishra), and sitarists Niladri Kumar and Prateek Chaudhari. For some like Ustad Nishat Khan and Ustad Amjad Ali Khan, it’s a newer association, but one that is treasured nevertheless.

Apart from the belief that an artiste’s career takes off after an offering at Sankat Mochan, the opportunity to perform before a seasoned audience is something every musician aspires for. Even the uninitiated in the audience seem to have developed a keen ear for music having attended the festival over the years.

From being male-dominated, the festival gradually became inclusive, making space first for women artistes, then dance was introduced, and later, Carnatic music. In the last 10 years, ghazal, qawwali, fusion acts, and percussion ensembles have been featured too. The religion and caste of the artistes have never been an issue here, with Muslim and Christian artistes offering their music at the temple, including American saxophonist George Brooks and Pakistani ghazal singer Ghulam Ali.

This year, Pune-based vocalist Manjusha Patil made her debut haazri, despite having to record at home during the lockdown. She said, “It’s an opportunity not to be missed”. Sankat Mochan regular, the Delhi-based sarodist Pt. Biswajeet Roy Chowdhury, performed a magnificently structured recital that commanded attention; the ‘jor’ and ‘jhala’ were particularly noteworthy.

Jodhpur-based sarod exponent Pt. Basant Kabra, a disciple of Annapurna Devi, performed at the festival after a gap of some 30 years; the beautiful ‘alap jor jhala’ was a thorough offering and one did not miss the composition with percussion. One felt every ‘meend’ was appropriate in its usage and there was no duplication of musical thought. It was a pleasure to hear shehnai, an instrument inextricably linked with Benaras, played by Lokesh Anand and Vikas Babu.

One hopes that in 2022 at least Sankat Mochan will be held in its physical avtar; this festival’s unique ambience must be experienced live.

Denial of responsibility! TechiLive.in is an automatic aggregator around the global media. All the content are available free on Internet. We have just arranged it in one platform for educational purpose only. In each content, the hyperlink to the primary source is specified. All trademarks belong to their rightful owners, all materials to their authors. If you are the owner of the content and do not want us to publish your materials on our website, please contact us by email – [email protected]. The content will be deleted within 24 hours.
Benarasentertainment newsEntertainment updateFestivalMochannews updateSankatSankat Mochan Festival
0
Share

Bacterial Skin Infection Can Be Treated By A Microneedle Patch