Notice: amp_is_available was called incorrectly. `amp_is_available()` (or `amp_is_request()`, formerly `is_amp_endpoint()`) was called too early and so it will not work properly. WordPress is currently doing the `pre_get_posts` hook. Calling this function before the `wp` action means it will not have access to `WP_Query` and the queried object to determine if it is an AMP response, thus neither the `amp_skip_post()` filter nor the AMP enabled toggle will be considered. It appears the theme with slug `publisher` is responsible; please contact the author. Please see Debugging in WordPress for more information. (This message was added in version 2.0.0.) in /home/runcloud/webapps/techilive/wp-includes/functions.php on line 5313
 WhatsApp Chief Confirms Rollout of Multi-Device Support in Next 2 Months - TechiLive.in 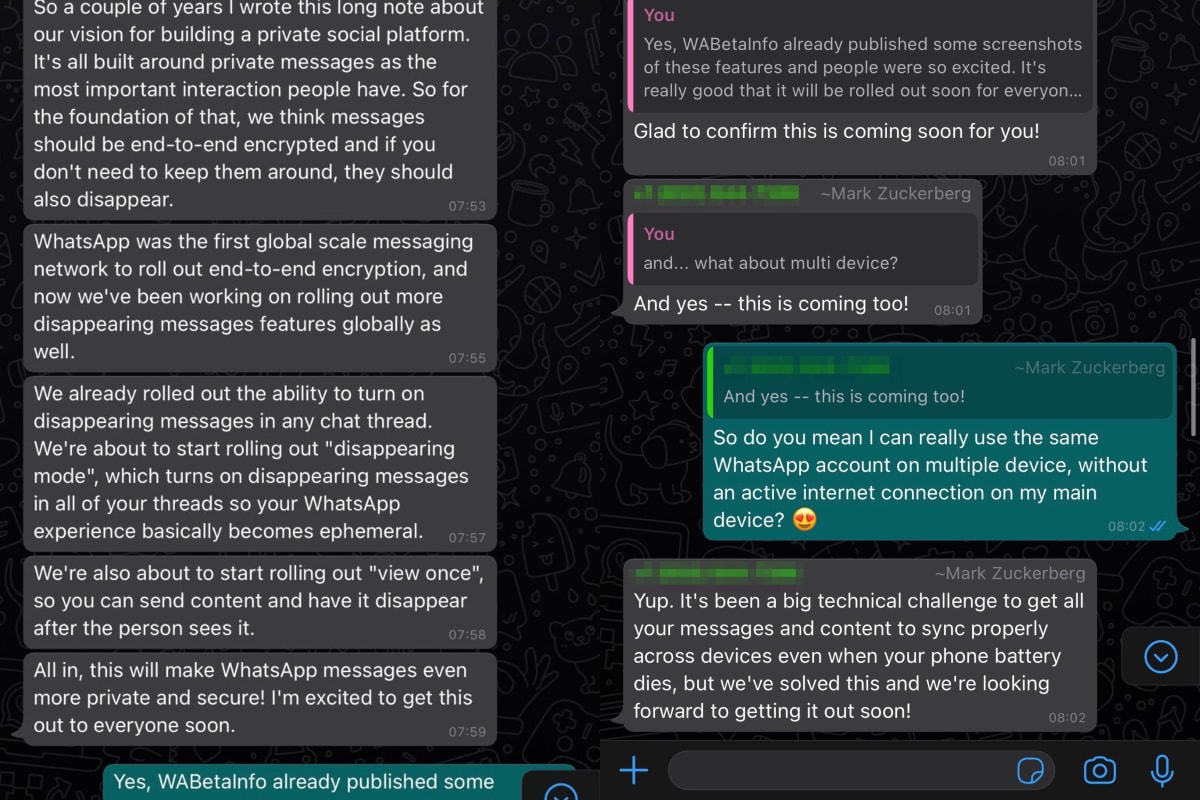 WhatsApp has confirmed the rollout of several new features on its platform. This includes a new Disappearing Mode, a new View Once feature, and the anticipated multi-device support. These features were confirmed by none other than Facebook CEO Mark Zuckerberg and WhatsApp chief Will Cathcart. They divulged this information through a unique WhatsApp chat with a renowned features tracker. Cathcart also offered hope on opening up iOS beta sign-ups and support for iPad devices in the future.

Popular WhatsApp features tracker WABetaInfo was invited into a unique group chat with Cathcart and Zuckerberg. The two executives confirmed in the chat that a new Disappearing Mode feature will be rolled out soon. This will, by default, turn on disappearing messages for all future chats and make the WhatsApp experience more ephemeral. Currently, users can turn on Disappearing Messages in groups and chats individually, but Disappearing Mode will enable it fully across chats and groups in the app.

Another feature that Zuckerberg confirmed through the conversation is ‘View Once’ and it will enable users to send content and have it disappeared after the person sees it. With this enabled, the recipient can only open photos and videos once before they disappear from the chat.

Zuckerberg and Cathcart also confirmed multi-device support and said that testing for public beta users will roll out in a month or two. Zuckerberg explained that the feature took a while to develop as there were several challenges. For instance, he said, “It’s been a big technical challenge to get all your messages and content to sync.” However, the company has managed to iron out all issues and says that users will soon be able to use same WhatsApp account on multiple devices, without logging out from any of them.

Tasneem Akolawala is a Senior Reporter for Gadgets 360. Her reporting expertise encompasses smartphones, wearables, apps, social media, and the overall tech industry. She reports out of Mumbai, and also writes about the ups and downs in the Indian telecom sector. Tasneem can be reached on Twitter at @MuteRiot, and leads, tips, and releases can be sent to tasneema@ndtv.com.
More

Denial of responsibility! TechiLive.in is an automatic aggregator around the global media. All the content are available free on Internet. We have just arranged it in one platform for educational purpose only. In each content, the hyperlink to the primary source is specified. All trademarks belong to their rightful owners, all materials to their authors. If you are the owner of the content and do not want us to publish your materials on our website, please contact us by email – admin@techilive.in. The content will be deleted within 24 hours.
Loading...
ChiefconfirmsDisappearing modegadget updatemark zuckerbergMonthsmulti device featuremultidevice
0
Share