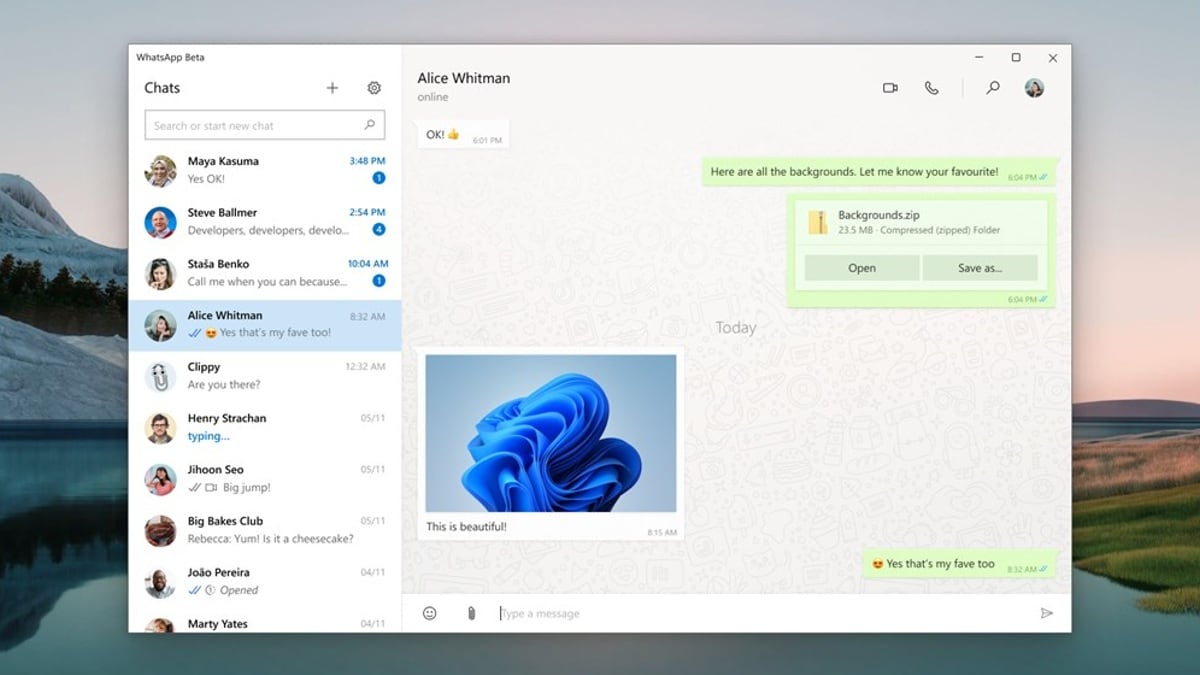 WhatsApp has been spotted developing new apps for Windows and macOS users. The new apps are found to have user interface (UI) improvements over existing WhatsApp desktop versions. WhatsApp has separately started rolling out the ability to pause and resume voice message recordings for some iOS beta testers. People using a recent WhatsApp for iPhone build have started seeing the ‘My Contacts Except…’ privacy setting for Last Seen, Profile Photo, and About updates. Just last week, beta testers on Android were also able to get the setting on their phones.

Italian blog Aggiornamenti Lumia spotted the new WhatsApp app for Windows 10 and Windows 11 users, as reported by WhatsApp features tracker WABetaInfo. It is a Universal Windows Platform (UWP) based app that appears to be developed from scratch — totally different in look and feel from the existing WhatsApp for Windows.

On the part of changes over the earlier version, the UWP version of WhatsApp is said to have acrylic effects which debuted on Windows 11. It also includes a new drawing feature to let users write or scrabble on a white panel on the app which can be shared with WhatsApp contacts.

The WhatsApp UWP app is also said to deliver notifications even when it is closed and not active on the desktop. Further, the app is said to take a second to start — faster than the existing app.

Although Microsoft is currently testing the new app, you can check out the new experience by downloading the latest WhatsApp beta version from the Microsoft Store.

In addition to the new app for Windows users, WhatsApp is said to be working on a new app for macOS devices. WABetaInfo reports that the app is based on Apple’s Catalyst project which is meant to allow developers to use a single code for building both macOS and iPadOS apps.

The new macOS version of WhatsApp is said to look identical to its iPadOS release which was spotted in the recent past but is yet to be officially available. WABetaInfo also says that you will get some UI improvements through the new app.

Alongside the new desktop apps, WhatsApp has started rolling out the pause voice recording feature to select beta testers on iOS, WABetaInfo reports. It is said to be available through WhatsApp for iOS beta version 2.21.230.16 and allow users to pause their voice message recordings and resume them back, using a pause button.

WhatsApp for iOS has been spotted with a new pause voice recording feature
Photo Credit: WABetaInfo

Not all beta testers have received the pause recording feature. However, WABetaInfo says that the beta testers who are already seeing voice waveforms during voice recording are likely to have higher chances to get the update over others. The feature appeared on the Web last month for both Android and iOS users.

WhatsApp for iOS beta version 2.21.230.15 is also found to bring the ‘My Contacts Excerpt…’ privacy setting that you can use for your Last Seen, Profile Photo, and About updates. WABetaInfo has shared a screenshot to suggest how the new setting would be available to the beta testers. WhatsApp was seen working on the privacy setting for the last few weeks. It also reportedly started rolling out to a recent WhatsApp for Android beta version last week.

Aside from the new beta updates for iOS, WhatsApp has started rolling out a group icon option for some beta testers on Android. WABetaInfo reports that the feature is a part of WhatsApp for Android beta release 2.21.23.15 and is meant to let you add a custom background, emoji, or a sticker to your group icon. It has been found to be in development at least since September, though WhatsApp has not yet provided any official details about its release.

Additionally, some beta testers on WhatsApp Business for Android and iOS have received the ability to create advertisements for Facebook, WABetaInfo reports. These advertisements are said to lead to WhatsApp to help enterprises increase engagements on their business accounts.

WhatsApp Business beta for Android version 2.21.23.15 and beta for iOS 2.21.230.15 are found to have a new Advertise on Facebook feature available that is accessible by going through Settings > Business Tools. A screenshot has been shared by WABetaInfo to give some reference about the update.

WhatsApp for iOS beta has been spotted with an Advertise on Facebook feature
Photo Credit: WABetaInfo

Meta-owned WhatsApp is yet to reveal when exactly the features spotted in its beta releases will be available to the public.

Denial of responsibility! TechiLive.in is an automatic aggregator around the global media. All the content are available free on Internet. We have just arranged it in one platform for educational purpose only. In each content, the hyperlink to the primary source is specified. All trademarks belong to their rightful owners, all materials to their authors. If you are the owner of the content and do not want us to publish your materials on our website, please contact us by email – [email protected]. The content will be deleted within 24 hours.
apple catalystAppsdevelopingfacebookgadget updatemacosspottedtech news
Share

Only one watch worth ₹ 1.5 crore taken for ‘proper valuation’ by airport customs, clarifies Hardik Pandya