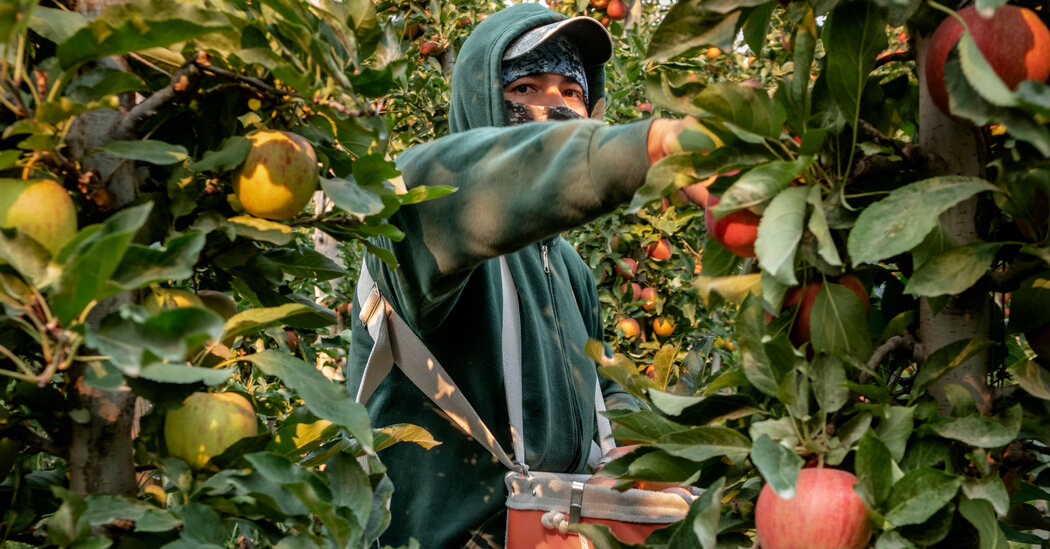 In early summer, a day laborer laying irrigation lines at a plant nursery just south of Portland, Ore., collapsed to the ground and died. His official cause of death was declared “heat related.”

It was 104 degrees out — several days into a brutal heat wave whose like has become increasingly commonplace in many parts of the country. Mussels and clams baked in their shells along the Washington coast. Record temperatures and fierce winds fueled one of the largest wildfires in the United States.

Drought, megafires and heat waves are descending on the Pacific Northwest as the effects of climate change alter the landscape. They have forced farm owners, fieldworkers and state regulators to navigate newly extreme conditions.

But visits to several farms in the Rogue Valley in Oregon and in Southern Washington over the last month showed that the response can often feel improvised, and at times inadequate.

Policymakers in Oregon and Washington have recently established safety regulations to protect workers. Just after the punishing heat wave in June, Gov. Kate Brown of Oregon directed the state’s Occupational Health and Safety agency to adopt emergency rules for any workplace where conditions could lead to heat illness.

The rules, which took effect Aug. 9, require employers to provide access to shade and cool drinking water in farms and other outdoor places when temperatures reach 80 degrees, with additional requirements to offer more breaks and periodic wellness checks when it reaches 90 degrees.

The rules also require employers that provide temporary housing to field workers, like those with H-2A agricultural visas, to keep rooms at 78 degrees or below. Washington State this year created similar emergency rules to manage extreme weather patterns, joining Minnesota and California, which have also imposed heat safety regulations that apply to farms in recent years.

The new protections on the ground in the Northwest can look thrown together: plastic benches roasting in the sun, pop-up tents for shade, drinks laid out in kiddie pools.

Farms have also begun shifts that run at odd hours or overnight to battle the heat.

The Oregon Farm Bureau, an industry group, has supported the new rules, noting that many of its farmers already carry out safety measures that include access to shade, water and extra breaks on their farms. But the group also said that adopting all of the rules has been challenging because they took effect during the middle of the harvest season.

“At some point, there is a breaking point in terms of rules and regulations and natural disasters,” said Anne Marie Moss, a spokeswoman for the group. “We need more federal and state government programs for farms to stay sustainable.”

Employees of a farm in Southern Oregon, who asked to not be identified out of fear of retribution by their employer, this week described cramped living conditions in temporary housing that made escaping the outside heat difficult.

At one unit, with little protection from the elements, the windows were fully covered to keep the heat and light out. In a 20-square-foot room with six bunk beds stacked in rows, small fans were tied to beds with pieces of cloth.

Wildfires have also generated some of the poorest air quality in the country. This week, laborers in Medford worked under 94-degree temperatures with an air quality index of 154 — a level considered to be unhealthy by federal standards.

The hazards of air quality and heat are magnified by the continued risk of the coronavirus pandemic. The Medford area has had among the highest growth rates of Covid cases in the United States.

One worker on a vineyard in Medford, who asked to be identified only as Beatriz because of her insecure status as a migrant worker from Mexico, said field conditions had become exceptionally harsh recently. She noted that while her employer supplies the workers with water, there is little shade for taking cover during her 6 a.m. to 3 p.m. shifts.

The heat and wildfire smoke worry her, but not because of health concerns. Beatriz, 38, like many others, is paid by what she can pick. “The grape goes to waste with the smoke,” she said. “It affects our pay also, because we don’t get paid for bad grapes.”

Some farm owners have questioned whether they should be in business at all. Instead of picking pears, people this week at Meyer Orchards in Medford were cutting down trees, dismantling a farm that had been operating for over a century.

Oregon, like much of the West, is gripped by drought. Large parts of the state have exceptionally low levels of water, according to the United States Drought Monitor, including the river valley where the Meyer orchard sits. The outlook is not promising either, according to forecasters.

“There has never been a drought this severe,” said Kurt Meyer, who is the fourth generation to run the orchard. “After 111 years, we didn’t have much of a choice. You can’t farm without water.”

“The industry will have to go to where there’s water,” Mr. Meyer said. “I don’t see the Rogue Valley being a big farming community anymore.”

Denial of responsibility! TechiLive.in is an automatic aggregator around the global media. All the content are available free on Internet. We have just arranged it in one platform for educational purpose only. In each content, the hyperlink to the primary source is specified. All trademarks belong to their rightful owners, all materials to their authors. If you are the owner of the content and do not want us to publish your materials on our website, please contact us by email – [email protected]. The content will be deleted within 24 hours.
Education newsEducation updatehardHazardousJobsnews updatetechi liveturn
Share