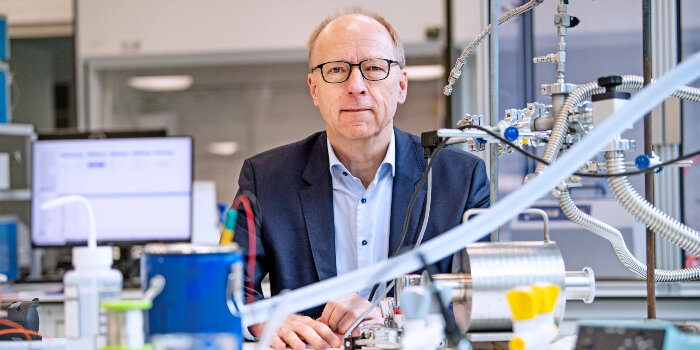 Why aren’t we going full steam with carbon capture?

As early as 2005, carbon capture and storage was identified by the UN’s Intergovernmental Panel on Climate Change (IPCC) as one of the solutions for tackling climate change. So why aren’t we going full steam with carbon capture?

Read the explanation from professor Erling Stenby. He his head of department at DTU Chemistry and is at the forefront of a Danish partnership that has just received a conditional commitment from Innovationsfonden to implement a roadmap for Denmark’s future capture and storage of CO2.

Why are we hesitant about carbon capture?

There are several reasons why Denmark—and other countries for that matter—don’t do carbon capture on a large scale. One of the reasons is that we haven’t figured out who should pay for it. If it is the CO2-emitting companies who will be responsible for the capture, then they need to invest in the carbon capture facilities, and the future cost of operating them. They need to cover that expense. So they could add it to the price of the product they sell. There is hesitation around doing this as the extra costs for carbon capture will increase the cost of the products, and if you are the only company or only country that does this, your competitiveness will be negatively affected. Even if governments intervene with support, the money will have to be taken from citizens. So the whole financing needs to be politically clarified before we can really get started. At the end of the day, consumers will be landed with the bill either way, so we will all have to accept that we have to pay more for the life we live today.

Which countries are furthest ahead?

Right now, there is no country that captures and stores carbon at a national level. There is very strong research and development in the countries that want to continue extracting fossil fuels, for example China, Australia, Canada, Norway, and the United States. In the United States, development stalled under the Trump administration, but this is now starting up again. Several counties have built large facilities for carbon capture and are trying to get the technology ready, as it is now clear to most that this is a solution we need to utilize, and they don’t want to be the country that isn’t ready.

Is the technology ready?

Not completely. Technologically speaking, we can capture CO2, but in Denmark we have not progressed much further than small demonstration facilities. This is due to fluctuating political prioritization of the development of capture and storage technology over the past 20 years. Right now, carbon capture and storage has a high priority. In order to move forward, the technology needs to be scaled up and matured. When scaling up from small facilities to larger ones, there are always new challenges requiring new solutions. It is through scaling up that we also find ways to make the process more efficient. The maturation of technology is also about whether we can find a less energy-intensive way of getting hold of the CO2 we have captured. CO2 is typically trapped in a liquid, which must then be heated vigorously to release it again. This is the most costly part of the capture, as it requires a lot of energy. All over the world, there is interest in finding cheaper ways of capturing CO2 and storing it.

Can companies profit from the sale of CO2?

The idea of companies profiting from selling the CO2 they capture is a long way off. We are going to capture enormous amounts, and the volumes simply exceed our need for CO2 as a raw material. It is possible to make different products using CO2 as a raw material, for example plastics. But it is very complicated. It is also possible to use CO2 to produce liquid fuels, such as jet fuels. In technical terms, this has been possible for many years, but it is still very expensive. In addition, the process requires access to carbon-free electricity. So it only makes sense to produce the fuels if you have access to power that is not produced by burning fossil fuels. Otherwise, we’re back to square one.

Is storage the best solution?

Yes, so far it has made most sense to store the CO2 we capture. It may be that storage turns out to be a transient phenomenon that we use until we have found a really good use for CO2.

Storage also isn’t free, as whether we are storing on land or in empty oil or gas fields at sea, the CO2 needs to be transported there. How we move the CO2 around is yet another open-ended question. For example, should infrastructure such as pipeline construction be built for this, or can some of our existing infrastructure like natural gas pipelines be used? It is also unclear who should be responsible for the CO2 we store. So there is a lot of legislative work on the topic to be done, both in terms of who will finance and who will be responsible for capture and storage.

Provided by
Technical University of Denmark

Denial of responsibility! TechiLive.in is an automatic aggregator around the global media. All the content are available free on Internet. We have just arranged it in one platform for educational purpose only. In each content, the hyperlink to the primary source is specified. All trademarks belong to their rightful owners, all materials to their authors. If you are the owner of the content and do not want us to publish your materials on our website, please contact us by email – [email protected]. The content will be deleted within 24 hours.
arentcaptureCarbonfullgadget updatesteamtech newstech update
Share

Indian cuisine is very popular in Dubai and will continue to remain that way, says Celebrity Chef Sanjeev Kapoor

Q&A: How the NFL altered course to keep season going amid pandemic