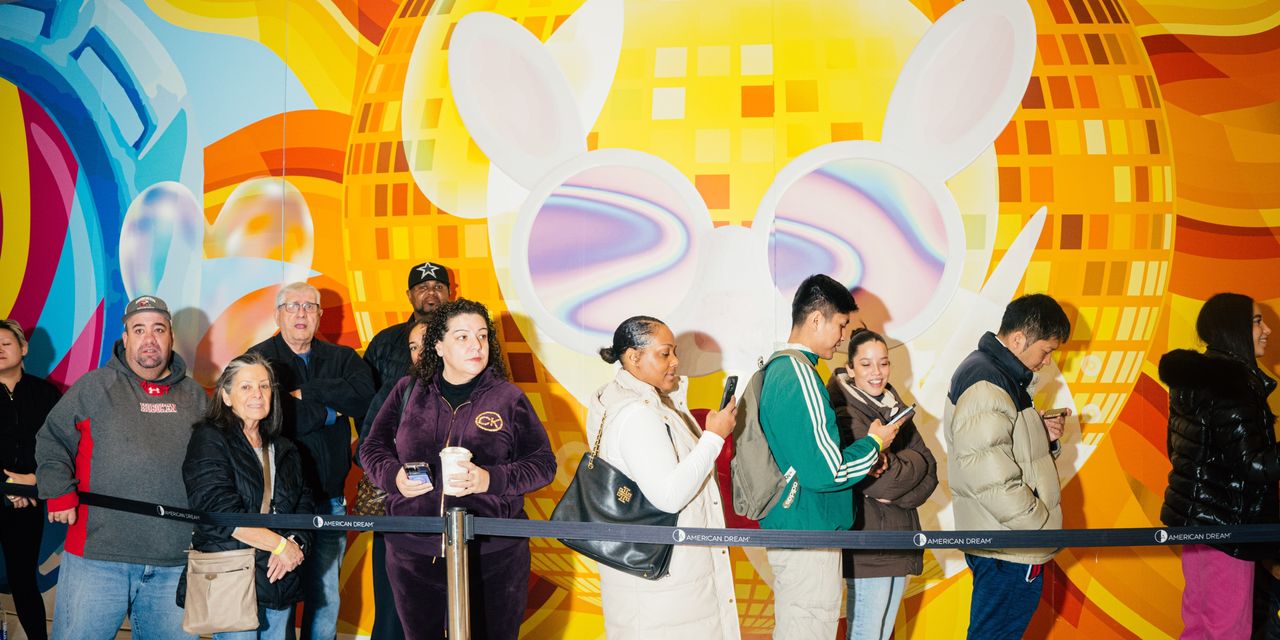 Black Friday is back—even if many of the door-buster deals aren’t.

Millions of Americans are expected to visit bricks-and-mortar stores on the Friday after Thanksgiving as the Covid-19 pandemic recedes and people return to prepandemic habits. That is a reversal of the past two years, when they were largely stuck at home and did more shopping online. This year, however, many household budgets are pinched by high gas and grocery prices.

Early signs point to more muted activity than last year. People spent $5.3 billion online on Thanksgiving Day, up 2.9% from the holiday last year, according to

Analytics, which tracks spending on websites. Adobe forecasts that online spending on Black Friday itself will be $9 billion, up 1% from a year ago.

Gabriela Faria, a 26-year-old substitute teacher from Yonkers, N.Y., was at her local Kohl’s by about 5 a.m. to take advantage of deals for her Christmas shopping. Also, she said, because after two years of avoiding the Black Friday tradition because of Covid, “I’m over online shopping.”

She and her friends made a plan to go out this year. “We want to go and touch things, see them and just get them now,” she said.

Black Friday Is Back, With Smaller Crowds

At the store, about a half-dozen employees clustered near the front entrance greeting arriving customers. The registers were free of lines, and signs advertised discounts throughout the store.

With many stores closed on Thanksgiving, retailers are preparing for a big surge on Friday. Sales, excluding car dealerships, are forecast to increase 15% compared with Black Friday last year, according to Mastercard SpendingPulse, which measures in-store and online retail sales across all payment types. Sales at physical stores are expected to rise 18% on Black Friday, while online sales are expected to be up 3.7%, Mastercard said.

“This is the closest to a normal Black Friday that we’ve had in several years,” said

Many retailers started dangling big discounts in October to unload excess inventory as supply-chain bottlenecks have eased. But the bargains weren’t enough to tempt some shoppers as concerns about inflation and the economy continued to mount.

and other chains said sales slowed in October and early November as people delayed holiday purchases, although the business picked up in recent weeks as cold weather blanketed the Northeast and other parts of the country.

On Wednesday, the University of Michigan released its November consumer-sentiment index, which fell 5.2% compared with October and is down 15.7% compared with November 2021. “Along with the ongoing impact of inflation, consumer attitudes have also been weighed down by rising borrowing costs, declining asset values and weakening labor-market expectations,”

One casualty of the pandemic that isn’t returning in full force is the traditional door-buster—goods offered at deep discounts for a limited time, typically during early-morning hours, to draw customers to stores. Shoppers often lined up for deals on big-screen TVs, electronic gadgets and other goods. At times, the crowds turned dangerous, as people stampeded into stores to get items before they sold out.

chief industry adviser of market-research firm NPD Group Inc. “They don’t want to fight the crowds and get up at 4 a.m.”

, and Macy’s are among the chains that stopped doing door-busters during the pandemic, when they had to limit the number of people in stores for health reasons. They have switched to promotions that run for longer periods, sometimes all day or even a week.

“Everything on sale has already been up online all week,” said Diana Amoah, 25, who visited a Best Buy not far from her home in the Bronx, N.Y., with her sister Barbara looking for a television and earpods. The sisters used to come out for doorbusters every year but hadn’t since Covid.

Steel barricades to contain lines stood outside the Best Buy store entrance, which opened at 5 a.m. Roughly 20 people showed up for the opening.

“We were getting complaints from customers, who were coming in only to find the item they wanted was sold out,” Macy’s Chief Executive

said of its door-busters. “People want to shop when they want to shop. They don’t necessarily want to come in during that morning window.”

a 32-year-old songwriter who lives in Manhattan, bought a dishwasher in October for 30% off as a Christmas present for herself. “I thought, maybe I should wait until Black Friday,” Ms. O’Dell said. “But I didn’t want to be up until midnight on Thanksgiving.”

Black Friday advertisements that use the word “door-buster” have been running at about half the level of 2021, according to DealNews.com, a comparison-shopping website. “The types of discounts are similar, but retailers aren’t restricting them to a narrow time frame,” said

For instance, Target is offering 40% off boots and coats and $60 off Beats Studio earbuds from Nov. 24 through Nov. 26. Walmart is discounting a Chefman espresso machine by $40 on Friday, while supplies last. And Macy’s is offering discounts on everything from handbags to bedding through Saturday.

Inflation is still near a four-decade high. Ms. Faria, the substitute teacher, said she needs discounts to afford Christmas presents this year, as the rising cost of groceries stretches her budget. “At this point, we’ve got to save everything we’ve got,” she said. “But we still want to make Christmas warm and fun.”

Some people are finding creative ways to make their dollars stretch further as everything from toys to tea cozies cost more.

of Boulder, Colo., is using the rewards points from her American Express card to buy gifts, including books, a bathrobe and a karaoke microphone. “I plan to use points for all my holiday shopping this year,” the 48-year-old food-marketing executive said.

Not all retailers are forgoing door-busters.

is offering door-busters as part of its 48-hour Black Friday sale, which starts on Thursday morning, including children’s pajamas for $10 and ski gear as low as $15.

The first 200 people to enter Kohl’s stores when they open at 5 a.m. on Friday have a chance to win prizes such as a Samsonite carry-on luggage or a trip to a Legoland resort.

JCPenney is bringing back its door-buster coupons after a two-year hiatus. The same-day coupons go to the first people in line when stores open at 5 a.m. on Black Friday. Quantities vary by store, the company said. The coupons are for $10 off a $10 purchase, $100 off a $100 purchase and $500 off a $500 purchase and are valid for Black Friday only.

Catch up on the headlines, understand the news and make better decisions, free in your inbox every day.

“We’re preparing for Black Friday to be back this year,” said

JCPenney’s chief merchandising officer. “People will want to come out and shop.”

Tonya Lambert, 53, spent part of her Friday shopping at The Domain in Austin, Texas with her daughter. Mrs. Lambert said while she’s not a big Black Friday shopper, she enjoys going out for fun and was able to find some good deals on toys and jewelry without an early wakeup call to shop. She also noticed fewer people out in the early morning hours than before the pandemic.

“I still think people are mostly shopping online,” Mrs. Lambert said. “There’s people out but it feels like any other day.”

Some retail executives said they are preparing for a back-end loaded season, particularly since Christmas falls on Sunday. That will allow people to snap up last-minute gifts on the preceding Friday and Saturday. The longer shoppers wait to buy, the more nervous retailers become and the more they will discount, executives said.

“As good as the deals are now, they will get better,” said

the chief executive of

Denial of responsibility! TechiLive.in is an automatic aggregator around the global media. All the content are available free on Internet. We have just arranged it in one platform for educational purpose only. In each content, the hyperlink to the primary source is specified. All trademarks belong to their rightful owners, all materials to their authors. If you are the owner of the content and do not want us to publish your materials on our website, please contact us by email – [email protected]. The content will be deleted within 24 hours.
amazon.comAMZNarentArianna O'DellBBYbest buyblackbusiness news
Share

Save $200 On This Great Ultrawide Gaming Monitor