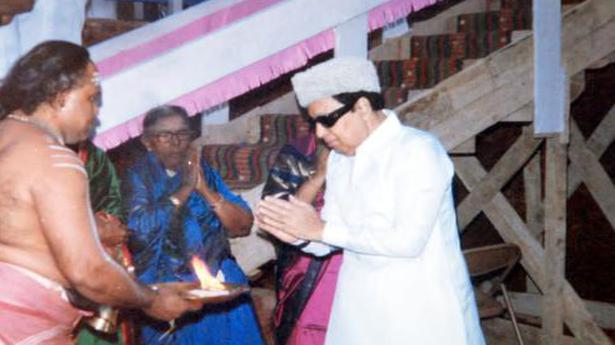 Readers of ‘Ithayakkani’, a monthly magazine on MGR, relive the icon’s illustrious journey

There is only one hero and that is our MGR;Thalaivar lives in our hearts forever — this was a collective emotion of MGR fans who gathered recently in Coimbatore, to celebrate the icon and his journey. “It is a meeting of our readers after a gap of three years,” says S Vijayan, editor and publisher of Ithayakkani, a monthly magazine dedicated to the late matinee idol and politician. The magazine launched in 2000, packs in anecdotes and information about the actor’s rise to stardom, rare photographs, filmography, political life and more. “We have readers from as many as 150 cities in Tamil Nadu, 10 cities in Kerala, besides Mumbai, Delhi, Bengaluru and Malaysia and Singapore,” says Vijayan, a self-confessed fan of MGR from his childhood. “He is the only leader from Tamil Nadu after Swami Vivekananda to have a statue in Malayasia.”

MGR always shared a special bond with Coimbatore, says the Ithayakkani editor. “His first movie Sri Murugan was filmed in Coimbatore studios. His sivathandavam performance in the film was much talked about. Later, he made many movies including Rajakumari, Marmayogi and Mohini for Jupiter Films here that went on to become superhits. Malai Kallan shot at Pakshiraja Studios here made history.”

One of his iconic songs, ‘Kadavul Ennum Muthalali Kandedutha Thozhilaali Vivasaayi Vivasayi’ from the film Vivasayi was shot at agriculture fields in the Tamil Nadu Agriculture University. “His producer, Chinnappa Thevar, (with whom he has done 16 films) managed to take an atheist MGR to the famous Murugan temple in Marudhamalai,”recounts Vijayan.

It was MGR who laid the foundation stone for Hotel Thai, the venue of the recent meeting. He shared a special relationship with the RHR family that own Royal Theatres, RHR Hotels and Hotel Thai. G Ratnavelu, of the RHR family, remembers MGRwho visited their home and dined with them. “He always kept his word. He promised to lay the foundation stone for our Hotel Thai and though ill did so.”

Vijayan attributes the magazine’s success to the star’s fan base across the world. “It is overwhelming. Many Shivaji fans have turned towards MGR after reading about him in our magazine pages,” he laughs. At such meetings, the readers share anecdotes, discuss his films and more. “Did you know that his film Madurai Veeran (1956) ran for 100 days in all the 36 movie halls that screened it?” Asks Vijayan who has watched all of the 138 MGR films. He has gathered thousands of rare photographs of MGR — stills from his theatre days and unreleased films, family photographs, and from his political life. As a part of the life history series for the book, Vijayan visited Maruthur House, MGR’s 200-year-old tharavadu (ancestral house) in Vadavannur, near Palakkad in Kerala.

To reach out to more audience, Vijayan has launched Ithayakkani TV, a YouTube channel on MGR. “Our aim is to share only credible information about the star on social media; it is the only way to stop misinformation that is doing the rounds online.”

Looking back at his two decades of association with the magazine, Vijayan says, “There has never been a dull moment. I am always in awe of MGR. A man who made every minute of his existence count.”

Denial of responsibility! TechiLive.in is an automatic aggregator around the global media. All the content are available free on Internet. We have just arranged it in one platform for educational purpose only. In each content, the hyperlink to the primary source is specified. All trademarks belong to their rightful owners, all materials to their authors. If you are the owner of the content and do not want us to publish your materials on our website, please contact us by email – [email protected]. The content will be deleted within 24 hours.
Adimai PenAyirathil OruvanCoimbatoreCovid-19En Annanentertainment newsEntertainment updateIthayakkani
Share

Centre to states: Administer at least one dose of vaccine to all teachers, staff in Sept