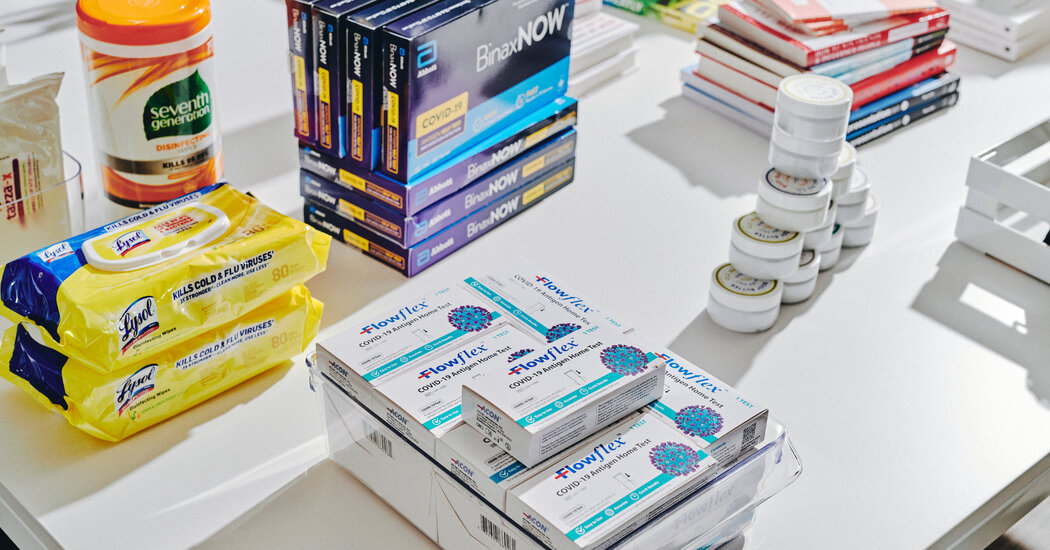 Why Some Workers Are Getting All the Covid Tests They Need

The latest Covid-19 wave has left millions of Americans scrambling for tests, braving long lines in the cold at pop-up sites or searching furiously online for kits to use at home. But for a select group of employees at some of the country’s largest companies, tests are free and often readily available.

Without an adequate federal system for developing and distributing rapid tests, companies have put their own testing services in place.

Google will send full-time employees in the United States free at-home tests that deliver results within minutes and retail for more than $70 each. BlackRock, an investment firm that manages nearly $10 trillion in assets, offers tele-health supervision as employees self-administer rapid tests for international travel. At JPMorgan Chase, bankers can order at-home rapid tests from an internal company site.

Some companies are using the tests to call their staff back to the office. For others, at-home Covid testing has become the newest wellness benefit, a perk to keep employees healthy and working — even from their couches — while providing peace of mind.

The testing available to a small number of white-collar professionals underscores the difference between their pandemic experience and that of other Americans, putting them at an advantage over many, including workers at small businesses without the means to procure testing kits for their staffs. Like personal protective equipment and vaccines, tests have become the latest example of how a tool to battle the pandemic can exacerbate social and economic divides.

“We’re the epicenter of the epicenter and I can’t get test kits anywhere,” said Thomas Grech, president of the Queens Chamber of Commerce, which has roughly 1,400 members that employ about 150,000 workers in the borough.

Some employers secured contracts with companies that supply or administer tests in the earlier months of the pandemic, before the Omicron variant unexpectedly drove up demand. Following the advice of experts, some are incorporating testing as part of their return-to-office protocols.

Belle Haven Investments, an asset management firm in Westchester County in New York with only 40 employees, has been storing tests in a supply closet.

“We’re trying to stockpile them,” said Laura Chapman, chief operating officer of the firm, which has not mandated a return to the office, though many workers have voluntarily come back. She added that the company was ordering only as many tests as employees were demanding, and that they were facing shortages: “Those tests, man, those home tests are so hard to get.”

In the United States, the federal government has moved more slowly than other countries to authorize rapid antigen tests for everyday use. Britain, for example, was quicker to approve rapid tests as a public health tool, leading to faster production. And unlike Washington’s approach to vaccines, the development of rapid tests has until recently been mostly financed by private companies like Abbott Laboratories. The result is a nationwide shortage of tests.

Americans who cannot get tests are often left to wait in lines that can run as long as three hours. Or they can try to buy at-home tests online or in stores. Walgreens and CVS last month announced limits on the purchase of at-home rapid test kits at stores.

The Biden administration has stepped up its efforts to make tests more broadly available and affordable, requiring insurer reimbursement for tests, invoking the Defense Production Act and announcing plans to ship 500 million tests to Americans. The United States is expected to have one billion tests by the end of this year, or three tests per person, according to Tinglong Dai, a professor at Johns Hopkins Carey Business School. The country is now performing over two million tests a day on average, up from about 500,000 last summer and higher than at any previous point in the pandemic.

Joseph Allen, an associate professor at the Harvard T.H. Chan School of Public Health, said earlier coordination on the national level could have “flooded the market” with tests and made them more available for everyone.

“It doesn’t surprise me that many organizations who were recognizing they need these tests to stay in business were buying them,” Dr. Allen said.

But with testing kits scarce, and sorely needed by people who can’t work remotely, some public health experts question the current distribution of resources.

BlackRock, which has more than 7,600 U.S. employees and has extended its work-from-home flexibility through Jan. 28, offers its staff up to one at-home P.C.R. testing kit each week, up to six monthly at-home antigen kits for employees or their family members exposed to Covid, and tele-health supervision for self-administered rapid tests needed for international travel, an option begun over the December holidays.

At Morgan Stanley, bankers can receive up to four free BinaxNOW tests, which cost about $40 in stores, every two weeks through a third party, though the shortage of tests has delayed shipment arrival. At JPMorgan, where employees said they were told last month that they could temporarily work from home because of the fast-spreading Omicron variant, bankers can order rapid tests.

TIAA, an investment firm with 12,000 workers in the United States, began offering free at-home testing to its staff in December 2020. The majority of its employees have worked from home since the start of the pandemic, though roughly 5 percent had been coming into the office last year. There is no limit on the number of tests employees can order, for themselves as well as their family, according to a spokeswoman, Jessica Scott.

“The goal of offering that is providing comfort to our employees so they don’t have to unnecessarily worry or be burdened by having to find a test outside the home,” said Sean Woodroffe, the firm’s head of human resources.

TIAA is considering expanding its testing options, by exploring a partnership with the company Detect, which makes at-home molecular tests. “We’re not hoarding tests,” Mr. Woodroffe added. “We have tests to fulfill our demand.”

Google’s full-time employees in the United States have access to multiple types of coronavirus tests they can take at home, the company said. Since last year, employees have been able to request P.C.R. tests provided by a company called BioIQ. Employees collect a nasal swab at home, and it is processed in the company’s lab.

Google also distributes to employees who want one a small testing device that produces results in minutes.

To perform the rapid molecular test, employees insert a cartridge into the reader, swab their nose and place the swab in the cartridge for results sent by phone. The test is made by Cue Health, a company that provided testing for the National Basketball Association’s bubble.

Google signed a deal with Cue Health in April to provide its employees with the test kits, according to a securities filing. The devices did not become available to the public for direct purchase until November. Cue Health also had a prior contract with the federal government and assisted it in distributing the tests across 20 states.

Consumers can now buy one of the readers directly from Cue Health for $250, and a 10-pack of the test cartridges retails for $712. Google gives employees 10 tests with the Cue Health reader, and will cover the cost of up to 20 more test cartridges per employee each month. (Cue Health said it offered memberships for consumers, which include discounts on tests and the reader.)

Google uses many temporary workers, vendors and contractors who do not get access to the Cue Health tests, according to documents reviewed by The New York Times. A spokeswoman for Google said temporary workers and vendors may use the at-home P.C.R. tests performed by BioIQ if they were coming into Google’s American offices.

Other technology companies have taken more limited approaches to testing. Microsoft offers free rapid antigen home tests to employees on its campus, said a spokesman, Frank Shaw. Meta, Facebook’s parent company, provides testing at around 10 of its offices for employees who have returned for in-person work, said Tracy Clayton, a press officer for the company.

But for many businesses, and their workers, tests are far harder to come by.

Jesus Caicedo-Diaz, who owns Skal, a restaurant in Brooklyn, said his employees were struggling to get Covid test results before the business opened at 10 a.m., with testing lines often running hours long by early morning.

Finding at-home tests is an even greater challenge. “They’re nowhere to be found. They’re all gone. If you do find them, they want $30 for them,” Mr. Caicedo-Diaz said. “If you go to a test site they tell you your result won’t come on time. I don’t know how to navigate this. It’s driving me crazy.”

Denial of responsibility! TechiLive.in is an automatic aggregator around the global media. All the content are available free on Internet. We have just arranged it in one platform for educational purpose only. In each content, the hyperlink to the primary source is specified. All trademarks belong to their rightful owners, all materials to their authors. If you are the owner of the content and do not want us to publish your materials on our website, please contact us by email – [email protected]. The content will be deleted within 24 hours.
business newsBusiness updateCovidnews updatetechi liveTestsWorkers
Share

Wordle Rip-Off With Annual Subscription Surfaced on the App Store