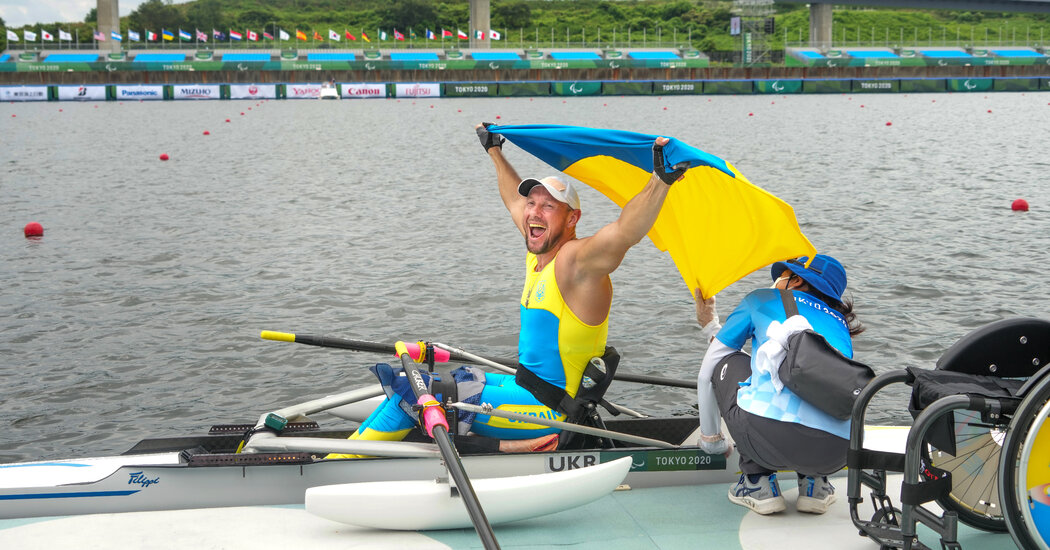 Why Ukraine’s Small Paralympic Team Packs Such a Big Punch

TOKYO — In American sports terms, the Paralympians of Ukraine constitute a small-market marvel, the Slavic equivalent of the Oakland Athletics.

At the Tokyo Paralympics, which ended Sunday, the Ukrainians finished fifth in the overall medal standings with 98, just six fewer than the United States. Each of the top four countries — China, Britain, Russia and the United States — had more than 220 athletes in Tokyo, while Ukraine brought 139.

The success has not been matched by Ukraine’s Olympians, who were 16th in the Tokyo overall medal standings last month. They won one gold medal, four fewer than Maksym Krypak, whose seven medals in swimming — five gold, plus one silver and one bronze — made him the most decorated athlete of the Tokyo Paralympics.

Ukraine has been one of the top six countries in the medal count at nine consecutive Paralympic Games, summer and winter, despite consistently being ranked among the poorest countries in Europe and cited by the United Nations as a difficult home for people with disabilities.

That athletic success has been virtually uninterrupted in recent years, despite Russia’s annexation of Crimea in 2014, which effectively cut Ukraine’s Paralympic contenders off from their high-performance training center on the Black Sea. Technically, Ukraine remained the owner of the center, but Valerii Sushkevich, a longtime member of Parliament and the president of the nation’s Paralympic committee, said that using it proved too complicated.

A new center with the requisite adaptive equipment remains unfinished in Dnipro, a city in a government-controlled part of eastern Ukraine.

Sushkevich, 67, grew up under Soviet rule, using a wheelchair and becoming a competitive swimmer despite facing strong biases against public displays by people with disabilities.

“It was not so good for the picture of the Soviet Union,” Sushkevich said through an interpreter, recalling that he was effectively told, “You must be outside of this society.”

The Soviets committed to excelling in the Olympics but sent athletes to the Paralympics only in 1988, the last cycle before the country fully dissolved in 1991.

Ukraine made its first Paralympic appearance as an independent country at the Atlanta Games in 1996, winning just seven medals, equal to Krypak’s total in Tokyo.

But Sushkevich was building a program, Invasport, that would place sports centers for disabled people in each of Ukraine’s two dozen oblasts, or administrative divisions, and also create sports-oriented schools for children.

“Invasport combined a state system and a nongovernment system,” he said, and it aimed to let people become active as much as to foster Paralympians.

But there was a substantial incentive to build an athletic career. Without that, people with disabilities had few options for making a living.

“Before sport I had practically nothing. Actually, not practically; literally I had nothing,” Lidiia Solovyova, a two-time Paralympic champion in power lifting, told the BBC in 2012. “I had no flat. I had no salary. I had no good pension. But now, thanks to sport, I have all these things.”

“There is a concerning high degree of institutionalization of people with disabilities in Ukraine, rather than family- and community-based services being provided,” she wrote in an email, adding: “Inclusive education for children with disabilities remains a rarity rather than the norm. This is the result of limited infrastructure and strong negative attitudes in society.”

Oksana Boturchuk, a four-time Paralympic runner who won three silver medals in Tokyo, said she had become somewhat more recognizable in Ukraine after the release this year of “Pulse,” a movie about her life.

“But in my country, the Paralympics sportsmen are not very popular,” she said. “And everybody is surprised to know who I am. They say, ‘Oh, you are Paralympic silver medalist?’”

This summer, Volodymyr Zelensky, the president of Ukraine, visited the country’s Paralympic team ahead of its trip to Tokyo and apologized “for the fact that no president was personally present at sending off our Paralympians to both Summer and Winter Games in all these years.”

Two substantial changes arrived ahead of the Winter Paralympics in 2018: live telecasts of events and an increase in bonus money to match what the Olympians received.

The results this summer, Sushkevich conceded, were disappointing compared with the country’s third-place finish (behind China and Britain) in the 2016 medal count, which included 41 golds versus 24 this year. (The International Paralympic Committee formally ranks teams by gold medals, not the overall total.)

The return of competitors from Russia, who were barred in 2016 because of revelations about a state-sponsored doping program, all but guaranteed a lower ranking for Ukraine this summer. And Ukraine’s smaller delegation rarely includes competitive entries in sports like wheelchair basketball and rugby or goalball, sports in which the United States accrues a lot of hardware.

“A lot of people around me, they told us that we had a really good result in 2016 because we were higher than U.S.A.,” said Maxym Nikolenko, a three-time Paralympian who won a gold medal that year and a silver and bronze in Tokyo. “I’m sorry,” he added sheepishly, “but they were really proud about that.”

Denial of responsibility! TechiLive.in is an automatic aggregator around the global media. All the content are available free on Internet. We have just arranged it in one platform for educational purpose only. In each content, the hyperlink to the primary source is specified. All trademarks belong to their rightful owners, all materials to their authors. If you are the owner of the content and do not want us to publish your materials on our website, please contact us by email – [email protected]. The content will be deleted within 24 hours.
bignews updatePacksParalympicpunchsmallsports newssports update
Share