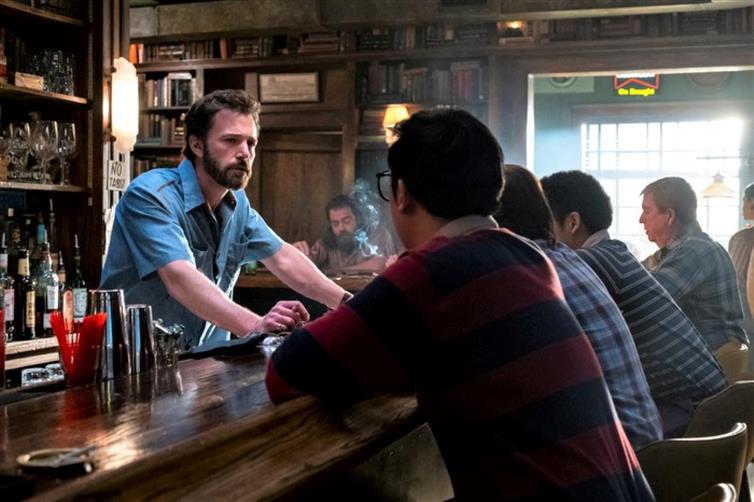 With little frenzy in the narrative, The Tender Bar comes across as a sensitive portrayal and a delicate slice of emotions and compassion

A boy who loves to read, decides to be a writer. So, what does it take to be a writer… Perhaps, a ton-load of books or may be nothing except a strong belief that you can be, rather are, one.

As the Pulitzer prize-winning journalist and author J. R. Moehringer’s memoir finds a reflection in celluloid reality The Tender Bar, this story of a child abandoned by his father turning into a successful writer is rather tender. First the child actor Daniel Ranieri in a heart-melting performance takes your breath away. Both his curiosity/ability to read and connect with a father figure, which in the absence of his own, he finds in his maternal uncle Charlie, a bartender, is palpable. And his performance as he wears a perfect blend of innocence and intelligence is both earnest and heart-tugging. Tye Sheridan as adult JR is competent too.

But what keeps the momentum going is Ben Affleck. His act as Charlie Maguire, who teaches his nephew a thing or two about ‘man’s science’ as well as provides him a treasure trove of books stored in this island bar aptly called Dickens. While the uncle-nephew relationship is at the core of the narrative and warms the cockles of your heart, we don’t feel the same intensity of warmth in the mother-child bonding.

Sure the child feels for his mother played by Lily Rabe, is often saddened by her sadness too. But the woman who becomes instrumental in his admission in the prestigious Yale University does not acquire any urgency.

In fact, there is little frenzy in the narrative. Set in 1970s and 1980s, it recreates the period with easy fluency. Much of the action unfolds in the bar. Clearly those were simpler times when each achievement of JR not only invites a toast, but also a benefactor ready to pay for the drinks.

Bar in its own way too serves as JR’s surrogate father as his real mentor of course is uncle Charlie, who even puts his romantic interest at stake to protect the child.

But for flashes of slight friction here or there, we don’t see much dramatic tension. William Monahan’s screenplay does retain some of the spark of the original writing, which was hailed as riveting, moving and achingly funny when published. In the film too much tickles the funny bone. Like the mantra ‘never hit a woman even when she stabs you with scissors’, the uncle passes over to the kid. Even an anti-feminist statement of the father has a ring of amusement. As he utters, ‘The thing about women sometimes they don’t think of cause and effect of things. They want freedom and then blame you for dispensing it once they get it’, you can barely suppress a chuckle. However, despite the absentee father and a broken love affair, there are no heart-breaking moments that will tear you up. Primarily, there is a feel-good tenor at work, even when JR’s sweetheart’s mother throws some nasty comments up his alley.

The film moves at an even, almost soft cadence till it reaches an expected conclusion. If you care to capture a delicate slice of human emotions and compassion, catch it on Amazon Prime Video.

With a runtime of 107 minutes it’s an easy and fuzzy, if not an exciting high on adrenaline watch. Ben Affleck may have missed the Golden Globe Award (he was nominated in the Best Supporting Actor category), but that does not make his performance any less praiseworthy. And the film deserves praise for living up to the word in its title Tender, as well as making a spirited character out of the bar.

Denial of responsibility! TechiLive.in is an automatic aggregator around the global media. All the content are available free on Internet. We have just arranged it in one platform for educational purpose only. In each content, the hyperlink to the primary source is specified. All trademarks belong to their rightful owners, all materials to their authors. If you are the owner of the content and do not want us to publish your materials on our website, please contact us by email – [email protected]. The content will be deleted within 24 hours.
BarCompassionDelicateemotionsfrenzylifestyle newslifestyle updateNarrative
Share

RecruitWell, LLC ® Expands its Locum Tenens Presence in Merger with US Locums, LLC