Notice: amp_is_available was called incorrectly. `amp_is_available()` (or `amp_is_request()`, formerly `is_amp_endpoint()`) was called too early and so it will not work properly. WordPress is currently doing the `pre_get_posts` hook. Calling this function before the `wp` action means it will not have access to `WP_Query` and the queried object to determine if it is an AMP response, thus neither the `amp_skip_post()` filter nor the AMP enabled toggle will be considered. It appears the theme with slug `publisher` is responsible; please contact the author. Please see Debugging in WordPress for more information. (This message was added in version 2.0.0.) in /home/runcloud/webapps/techilive/wp-includes/functions.php on line 5313
 With New Wrinkle, N.H.L. Division Races Heat Up - TechiLive.in 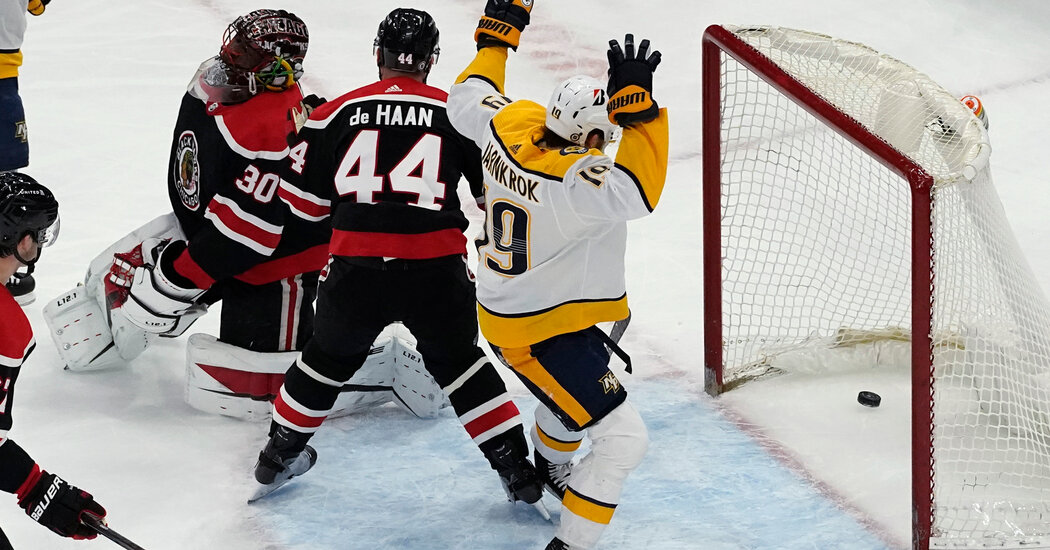 There’s a lot that is different about the N.H.L. schedule this season.

Start with the compressed timeline, requiring 868 regular-season games to be played in 119 days. Then there are the numerous Covid-19 protocols and restrictions, with more added since the season started. And due to the postponements and shutdowns, schedules have been in near-constant flux, wreaking havoc on practices and planning.

Yet there’s widespread agreement that this season’s scheduling format, which mostly features two-game series in the same city with a day off in between, and the geography-driven divisional alignment, has enlivened what typically is a grueling slog to the Stanley Cup playoffs.

“If you could put fans in the building,” Winnipeg Coach Paul Maurice said, “I would love for it to be like this forever.”

As teams approach the final 20 games of the regular season, and races to gain playoff position by finishing in the top four of each division intensify, this year’s schedule provides another bonus. The exclusively intradivisional play makes each contest a four-point game and provides the potential for quick climbs or slides in the standings.

In its 10 games starting March 11, Nashville went 7-3, including a five-game winning streak, to move from sixth place in the Central Division into a tie for fourth. After beating the Rangers on March 4, Philadelphia was tied for second place in the East Division with 27 points. Going into its game Wednesday, the Flyers had fallen to fifth, three points out of a playoff spot.

“You can’t afford to lose two or three in a row, and everyone knows that,” Winnipeg forward Pierre-Luc DuBois said.

With such volatility in the standings, the challenge for general managers, especially as the April 12 trade deadline approaches, is determining which clubs are buyers and which are sellers.

“I think teams are a little more reluctant to shake the tree, as it were, than they normally are,” Minnesota General Manager Bill Guerin said in a video news conference Wednesday. “Speaking for us, we’re keeping team chemistry in mind because we have good team chemistry and the guys are playing well together. So do you upset that? It’s still pretty quiet out there.”

The games themselves have more energy and intensity, Maurice said, partly because of the reduced travel.

Last season, Boston was in a division with Florida and Tampa Bay. This year, the Bruins’ most distant opponents are Pittsburgh and Buffalo, and travel between the others — Washington, Philadelphia, the Devils, the Rangers and the Islanders, has been done by train or bus.

This season, Vancouver has to make three trips instead of one, to play games in Montreal, Toronto, and Ottawa. But in all three cases it is scheduled to play two multi-game series and return home, rather than remain on the road as part of a longer trip, dramatically lessening travel demands.

“There’s times in the normal schedule where a team’s coming in, they’ve played the night before, and they get in at four in the morning, so that’s a big advantage to us,” Detroit Coach Jeff Blashill said. “Now, for the most part, we’re all in the same boat, so travel becomes less of a factor.”

Players also like the ability to focus on an opponent for more than one night. Teams have had to make more adjustments, Flyers forward Travis Konecny said.

“It’s about adapting and surprising the other team with different stuff every night, and they’re doing the same thing to us, so it’s fun,” he said.

Geography has created new rivalries and intensified others. The teams in the United States now play each other eight times, while the seven Canadian teams play four teams nine times and two teams 10 times.

Carolina, which was in the Metropolitan Division last season, is in the same division as Florida and Tampa Bay this year, and all three teams are bunched at the top of the Central.

“There are some guys you’re not going to like more than others on back-to-back nights,” Carolina forward Brett Pesce said.

Before this season, the last time N.H.L. teams played each other three straight times was in 2012-13. Already there have been a few four-game series — a league first. And from Feb. 2 to 15, the Coyotes and Blues played seven straight times because of Covid-related postponements that required schedule shuffling. The teams split the first six games, and Arizona’s Clayton Keller scored the only goal in the seventh.

“It was a fun series,” Keller said. “Almost every game was tight, and it had a playofflike atmosphere.”

Carolina played four straight games against Tampa Bay in February and finished a four-game set with Columbus on March 25, losing the first two games at home and winning the last two on the road.

For Hurricanes forward Jordan Martinook, no series against a single opponent is too long.

“Looking back to October and November, when we were thinking we might not even be playing a season, I don’t care if we play one team 56 times,” he said. “As long as you’re playing N.H.L. games, you can’t take it for granted. I’m just happy we’re playing.”

During a news conference on March 11, N.H.L. Commissioner Gary Bettman said the league would return to its former divisional alignment next season. He did, however, leave open the option to tweak the schedule to allow for more intradivisional play as well as back-to-back games, which would please Blashill.

“I think it’s very, very difficult to beat the same team twice in a row,” said Blashill, a former college and American Hockey League coach. “I saw that going back to my college hockey background, and we had that in the A.H.L. as well. It makes for very competitive games night in and night out.”

Denial of responsibility! TechiLive.in is an automatic aggregator around the global media. All the content are available free on Internet. We have just arranged it in one platform for educational purpose only. In each content, the hyperlink to the primary source is specified. All trademarks belong to their rightful owners, all materials to their authors. If you are the owner of the content and do not want us to publish your materials on our website, please contact us by email – admin@techilive.in. The content will be deleted within 24 hours.
news updatesports newssports updatetechi live
0
Share