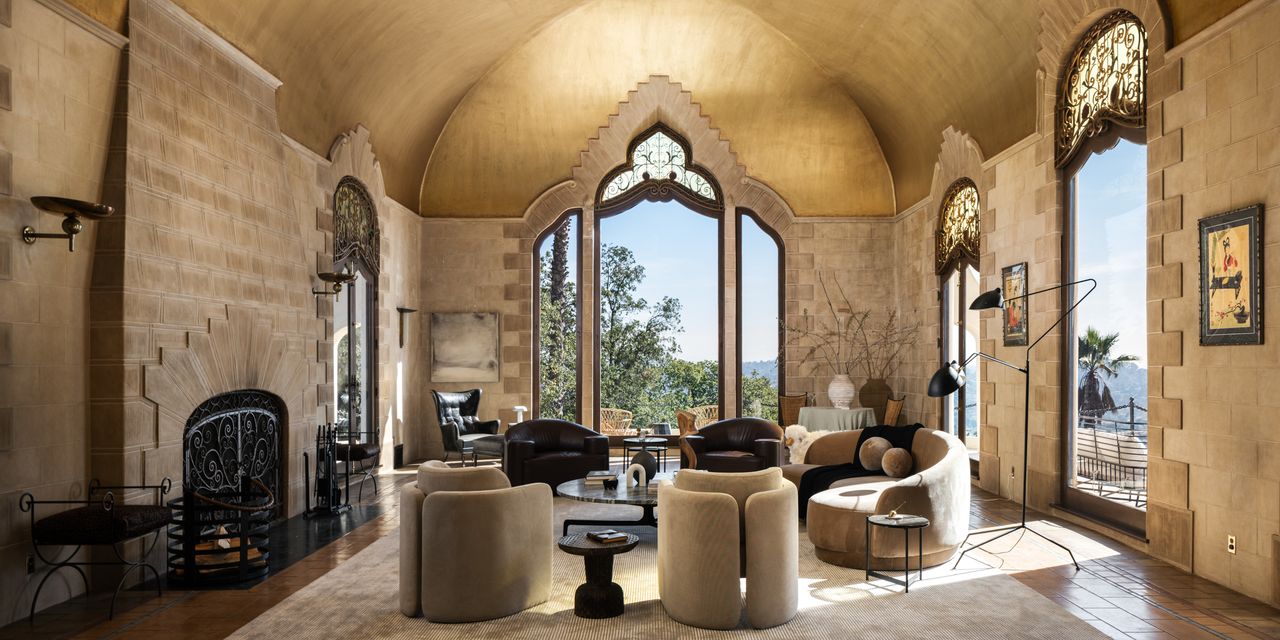 Be the first to know about the biggest and best luxury home sales and listings by signing up for our Mansion Deals email alert.

The roughly 2-acre property is located in the hillside neighborhood of Los Feliz, according to Ernie Carswell with

who has the listing with Steve Sawaii and Daria Greenbaum of Compass.

Mr. Balzary bought the house in 1996 for $1.17 million, according to property records. While he owned the property, Mr. Balzary added a recording studio in the garage building, Mr. Carswell said. Mr. Balzary didn’t respond to a request for comment.

The musician sold the house for $3 million in 1999 to the late John Gilbert Getty, a Getty oil heir, according to Mr. Carswell.

The seller is artist Muna El Fituri, who bought the house in 2014 for $8.3 million from Mr. Getty, according to property records. She declined to comment on the home.

A chandelier in the home’s foyer.

One of the four bedrooms.

A lounge area with gold-colored walls.

A sitting area with views of the city.

In the foyer, a chandelier hangs from a 26-foot ceiling above a spiral staircase that matches the hand-cut stone walls. Egyptian-inspired decorative columns line a roughly 15-foot-wide passageway that leads to the home’s formal living room, which has a gold-colored ceiling. It is meant to resemble the gold trim found in the Sistine Chapel, Mr. Carswell said. A balcony overlooks the living room and leads to a lounge area that is also gold-colored, Mr. Carswell said.

In addition to the 2-story garage, the grounds contain a basketball court.

In September, the median sale price of a home in Los Feliz was $1.9 million, up 9.1% from the same time last year, according to Redfin. Like most markets across the country, L.A. has seen a dip in the number of home sales compared with last year, according to Mr. Carswell. While listing prices remain similar, he said, there is more room for price negotiations.

Denial of responsibility! TechiLive.in is an automatic aggregator around the global media. All the content are available free on Internet. We have just arranged it in one platform for educational purpose only. In each content, the hyperlink to the primary source is specified. All trademarks belong to their rightful owners, all materials to their authors. If you are the owner of the content and do not want us to publish your materials on our website, please contact us by email – [email protected]. The content will be deleted within 24 hours.
artartsArts/EntertainmentC&E Exclusion FilterchiliContent TypesEntertainmentexclusive
Share

Perspective – What’s driving a rise in violence in the French overseas department of Mayotte?