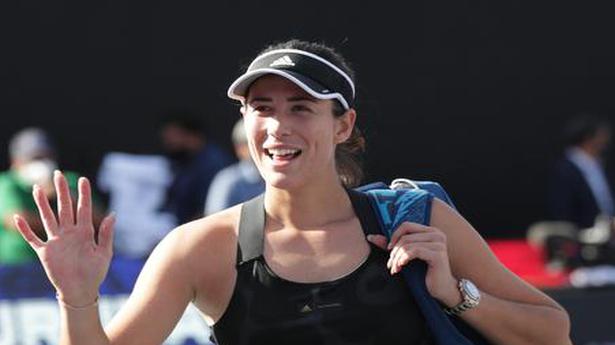 Muguruza, who will end the year ranked world number three, will face either Maria Sakkari of Greece or Estonian Anett Kontaveit in the final.

Garbine Muguruza advanced to the championship match of the WTA Finals with a 6-3 6-3 win over fellow Spaniard Paula Badosa in Guadalajara, Mexico on Tuesday, November 16, 2021.

In their first career meeting, Muguruza’s superior firepower put Badosa on the back foot from the outset and she broke the Indian Wells champion for a second time with a forehand winner to take the first set.

Badosa’s frustration boiled over during the change over and she was unable to hold serve in the lengthy second game of the second set, giving the former world number one and two-time Grand Slam champion another early break.

Muguruza fended off Badosa’s three break point chances in an 11-minute third game to take a 3-0 lead and rolled on from there, firing an ace to go up 5-2 and sealing the win when Badosa hit a backhand into the net on match point.

“I think it’s the best match that I played so far here in Guadalajara,” Muguruza said.

“It was a tough match facing another Spaniard in the semifinals of a Masters. Actually the first time we’ve encountered together … so it was tricky.

“But I’m very happy that I got the win.”

Muguruza, who will end the year ranked world number three, will face either Maria Sakkari of Greece or Estonian Anett Kontaveit, who play later on Tuesday, in Wednesday’s final.

The loss ends a breakthrough year for Badosa, who will finish the season at career-best world number eight.

“I didn’t feel myself. I didn’t play the match that I was expecting.”

The season-ending WTA Finals were not held last year because of the COVID-19 pandemic and were originally scheduled to take place in Shenzhen before being moved because of pandemic-related travel restrictions in China.

Denial of responsibility! TechiLive.in is an automatic aggregator around the global media. All the content are available free on Internet. We have just arranged it in one platform for educational purpose only. In each content, the hyperlink to the primary source is specified. All trademarks belong to their rightful owners, all materials to their authors. If you are the owner of the content and do not want us to publish your materials on our website, please contact us by email – [email protected]. The content will be deleted within 24 hours.
all-spaniard clashallSpanishAnett KontaveitBadosaClashfinalsGarbiñe MuguruzaMaria Sakkari
Share

F.D.A. Plans to Authorize Pfizer Boosters for All Adults This Week

Crypto may be allowed as asset, not as currency