Notice: amp_is_available was called incorrectly. `amp_is_available()` (or `amp_is_request()`, formerly `is_amp_endpoint()`) was called too early and so it will not work properly. WordPress is currently doing the `pre_get_posts` hook. Calling this function before the `wp` action means it will not have access to `WP_Query` and the queried object to determine if it is an AMP response, thus neither the `amp_skip_post()` filter nor the AMP enabled toggle will be considered. It appears the theme with slug `publisher` is responsible; please contact the author. Please see Debugging in WordPress for more information. (This message was added in version 2.0.0.) in /home/runcloud/webapps/techilive/wp-includes/functions.php on line 5313
 WTO chief hopes to seal IP waivers for COVID vaccines in Dec. - TechiLive.in 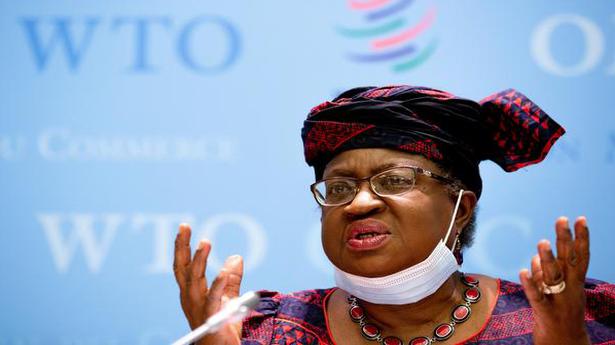 World Trade Organisation (WTO) Director General Ngozi Okonjo-Iweala on Wednesday said she was pushing for member-countries to reach an agreement of sorts by July and deliver a final outcome on the intellectual property (IP) waivers for COVID-19 vaccines at the body’s next ministerial council meeting in December this year.

“There are times when we can’t afford to take months and years… We are talking about lives being lost. Someone told me I am very ambitious. Yes, I am very ambitious when there are lives,” she said, emphasising the urgency to arrive at a swift pact on the intellectual property waivers needed to vaccinate the world faster.

During an interaction with Commerce and Industry Minister Piyush Goyal and World Economic Forum (WEF) president Berge Brendeshe, she expressed her anguish at the second wave of COVID-19 that had engulfed India and hoped the situation would be resolved soon.

“India has exported more than 40% of the vaccines… and we are very proud that India has been able to share when it had difficulties… And of course, all our hearts go out to the struggles that are there and I know that they will resolve very soon,” she said. Apart from India, China and the EU have also exported vaccines so far, she noted, thanking the three WTO members.

Stressing that her objective would be to push members to come to the table quickly and start discussions on the IP waivers, she said: “I am hoping by July, we will start to see something, with a final outcome by MC 12 [referring to the WTO’s ministerial council meeting scheduled to take place in Geneva from November 30 to December 3].”

The ministerial council, she hoped, would encompass agendas important to both developing and developed countries. There would be wide disappointment if the WTO could not come up with a package on agriculture in order to meet food security concerns on a permanent basis, she stated.

“I very much like the food security angle because it’s real. We are experiencing it and so we will be trying to persuade our members to look at the issue of public stockholdings and making that permanent, with all the transparency that is required and I am sure India has no problems with that,” she said, adding that domestic support issues as well as industrial subsidies need a look too.

“We have our work cut out for us, because we still have deep divides. But guess what, I am optimistic. We have to get it done. We just need some successes for the WTO,” concluded Ms. Okonjo-Iweala, who hails from Nigeria and took charge of the role this March.

Denial of responsibility! TechiLive.in is an automatic aggregator around the global media. All the content are available free on Internet. We have just arranged it in one platform for educational purpose only. In each content, the hyperlink to the primary source is specified. All trademarks belong to their rightful owners, all materials to their authors. If you are the owner of the content and do not want us to publish your materials on our website, please contact us by email – admin@techilive.in. The content will be deleted within 24 hours.
Loading...
ChiefCovidcovid vaccinesDecEducation newsEducation updatehopesnews update
0
Share

Google plans a key upgrade for the Pixel

Word of the Day: elated