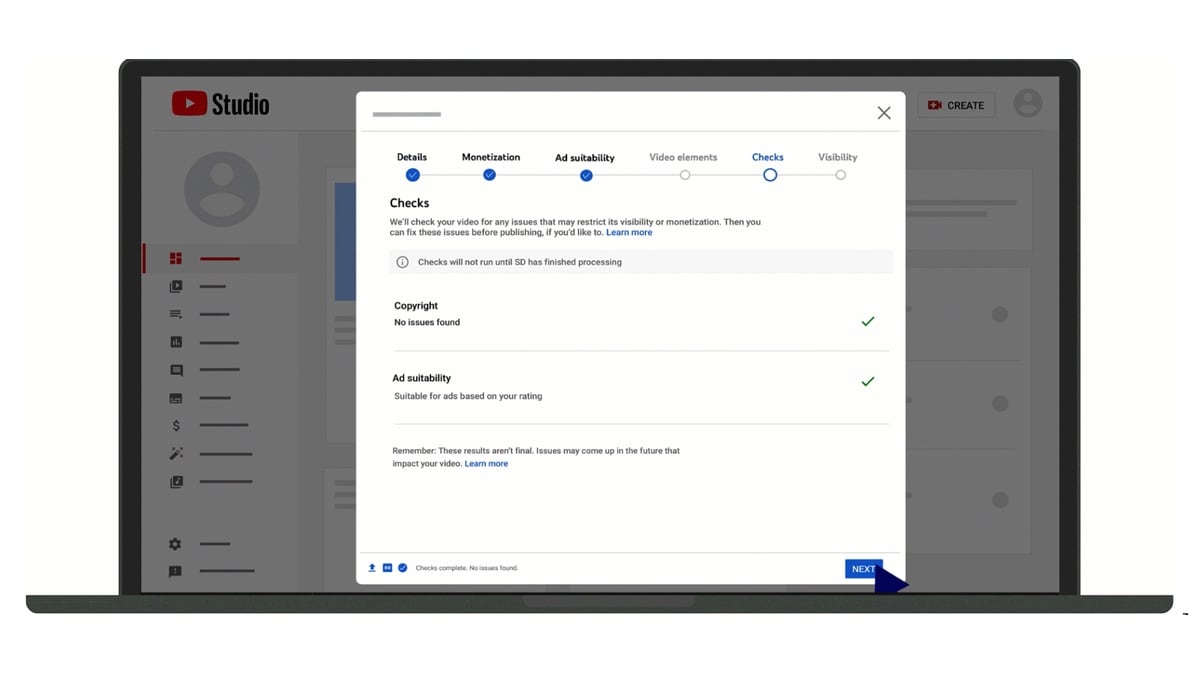 YouTube Now Checks for Copyright Issues Before Publishing a Video

YouTube is incorporating a new feature in YouTube Studio for desktop that checks for copyright infringement whenever a user uploads a video on the video sharing platform. To make money off one’s YouTube videos, one must strictly follow copyright laws. The video sharing platform, along with copyright owners, actively checks for any violation of the laws that can lead the video being pulled down or even the channel being banned. YouTube will now check for copyright infringements before the video is being uploaded to avoid any such instance once the content is uploaded. YouTube Studio has also been spotted with another new feature – a real-time subscriber count.

A recent tweet by @MattNavarra, shows the new feature available to creators on YouTube Studio. The new Checks feature, as the name suggests, checks for any copyrighted content that is uploaded on Google’s video sharing platform before the video is being uploaded. It employs the use of YouTube’s Content ID system that scans the content against a copyright database and reports if anything is found. This system will check for copyright infringement before the video is uploaded rather than after, giving the chance to creators to make changes to the content before it is published.

YouTube confirmed the rollout of the Checks feature on a support page, as spotted by XDA Developers, noting, “You can use the Checks page to screen your video for copyright claims and, if you’re in the YouTube Partner Programme, ad suitability. The copyright check allows you to dispute a claim or edit and fix your video if issues are found. The ad suitability check allows you to request human review if you think that our systems have made a mistake. These checks help you to learn about potential restrictions so that you can address them before publishing.”

While this system may probably not fix the whole issue of copyright infringement, but it is definitely a step forward in reducing the number of issues. However, even if the system green lights the content for copyright infringement, copyright owners can still flag the content after it is uploaded, thus probably not affecting copyright trolling in the future. But it will help creators remove any copyrighted data from their content to reduce the risk of getting banned or being demonetised.

While trying to test out the feature, Gadgets 360 wasn’t able to view it, but YouTube does note the feature rollout will be slow. “We’re slowly rolling out this feature. If you have access, you’ll see Checks as an option in the upload flow.” When it is made available to everyone, it should help reduce the risk for creators in getting their accounts banned by mistake.

In the meanwhile, 9to5Google reports a new feature spotted in YouTube Studio’s desktop app, one that shows creators a real-time subscriber count on the Creator Dashboard, in the Analytics tab. We were able to spot the feature ourselves, and its introduction will remove the reliance creators have had so far on third-party apps to track similar numbers.

In other YouTube-related news, the video sharing platform announced that it will start deducting taxes from creators outside the US. This is only meant for revenue generated from their viewers based in the US. However, the new regulations regarding these taxes don’t apply to creators within the US.

How to Check and Download CBSE, ISC Class 12 Timetable