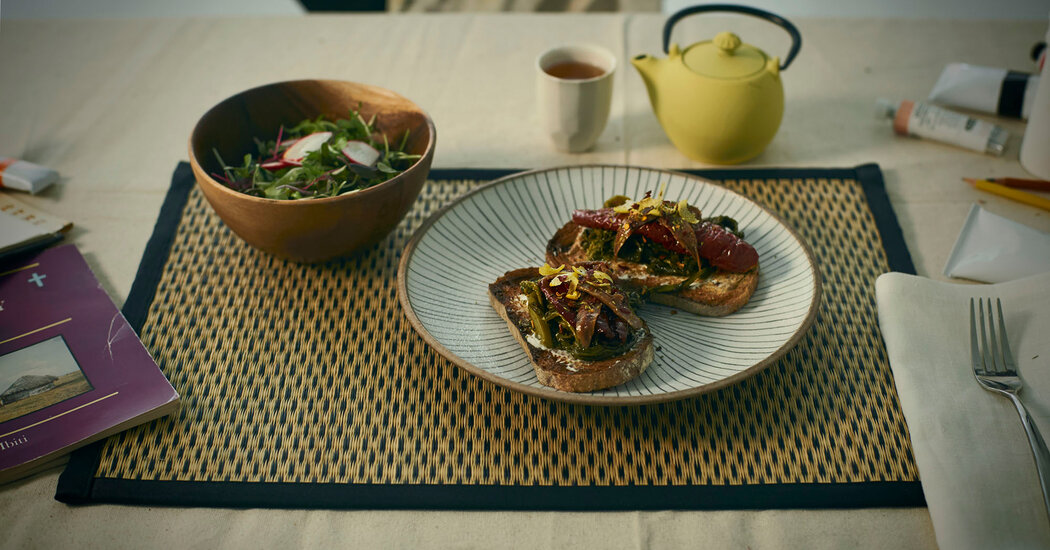 During a four-week residency at Casa Balandra, located in Marratxí about a half-hour drive outside of Palma, Majorca, this spring, Cassi Namoda would take long walks, picking oranges and green almonds along the way. “I might have been trespassing,” she admits. The New York-based artist, whose colorful paintings typically depict scenes of postcolonial Mozambique, where she was born, also found herself drawn to the traditional Spanish ceramic tiles that decorated the facades of nearby buildings and featured historical images and texts — and decided to paint some of her own. “I wanted to be honest to the landscape,” says Namoda, 32. So she acquired a few loose four-by-four-inch tiles from the man who operated the local kiln and, after glazing them with various configurations of conjoined fetuses connected at the neck, torso and belly, using four tiles per image, returned to have them fired. “I think the guy thought I was a little bit absurd,” she says with a laugh. To her, though, the works signaled a rebirth after a long year upended by Covid-19.

The feeling of having a fresh start extended to her approach to food, too. Just as being at Casa Balandra gave her the freedom to make work that existed beyond the confines of the art market, it also allowed her to slow down and eat more intentionally, and to embrace the communal nature of meals there. Sometimes Claudia Del Olmo, one of the sisters who run the residency, and her boyfriend, Gugliemo Profeti, would cook for everyone, and sometimes the artists would take turns preparing and sharing dishes. “Sitting down to eat was our time to come together and talk about what we were working on,” says Namoda. The photographer Lottie Hampson baked bread most mornings and, some nights, Namoda would encrust “a huge branzino” in an igloo of salt and cook it in an earthen pot. For lunch, she assembled pintxos, or small snacks, including open-faced sandwiches topped with fresh produce like dandelion greens and arugula that she bought at the market, foraged herself or got from the woman down the hill from Casa Balandra — “Cook this until it’s wilted,” she told the artist — and often with anchovies, too.

To a certain extent, food has long been intertwined with Namoda’s practice. As she was developing as an artist herself, she worked as the artist and former fashion designer Susan Cianciolo’s studio assistant, and the two shared countless meals together. At times Namoda would bring a savory Japanese-style oatmeal for them to eat for breakfast, or pick out cheeses and other fixings from Essex Market on the Lower East Side with Cianciolo’s young daughter, Lilac, to take back to the studio, where the trio would have a picnic on the floor for dinner. “Cheese wasn’t a huge part of my diet in Africa, so my palette was expanding along with Lilac’s,” says Namoda, who contributed a letter in which she describes this experience, along with a recipe for a salad bowl with pickled vegetables and hummus, to Cianciolo’s new book, “This Cookbook Is Made for the 5th Dimension,” published by the Lumber Room. In the letter, Namoda writes, too, about how nourishing food, such as the radishes, okra and chiles she pickles for the winter months, fuels her art making.

It also serves as a way to satisfy nostalgia. Namoda, who splits her time between East Hampton and Manhattan, where she is now doing a residency at Mendes Wood DM’s SoHo outpost, has lived in Indonesia, Kenya, Haiti, Los Angeles, the Dominican Republic and Benin, among other places. There’s a coconut stew she cooks whenever she misses her first home in Mozambique, a grilled fish with puréed banana that reminds her of her time in Sayulita, Mexico, and a mackerel soup that brings her back to Morocco. Since returning from Majorca, she’s been all about anchovy toast, which calls to mind fond memories and, considering how busy she is — her work will be featured in “A Force for Change,” a group show being presented by U.N. Women later this month, and she’s making new pieces for a show slated to open at Los Angeles’s François Ghebaly gallery this September, and for a 2022 solo show at Mendes Wood DM’s TriBeCa location — is conveniently easy to prepare.

She gets her anchovies from Il Buco Vita in NoHo, the olive bread from Carissa’s the Bakery in East Hampton and whatever produce is in season at the Union Square Greenmarket. Often, she makes the dish for herself in the kitchen of her current studio in SoHo, but she has also served it to a few friends. Anchovies might be a divisive food but so far, Namoda says, “They all said it’s the best sandwich they’ve ever had.”

Denial of responsibility! TechiLive.in is an automatic aggregator around the global media. All the content are available free on Internet. We have just arranged it in one platform for educational purpose only. In each content, the hyperlink to the primary source is specified. All trademarks belong to their rightful owners, all materials to their authors. If you are the owner of the content and do not want us to publish your materials on our website, please contact us by email – [email protected]. The content will be deleted within 24 hours.
AnchovyCassidelectablelifestyle newslifestyle updateNamodanews updatetechi live
0
Share

Analysis: Necessary or Not, Covid Booster Shots Are Probably on the Horizon

Chess World Cup: Praggnanandhaa set for Vachier-Lagrave challenge in Round 4