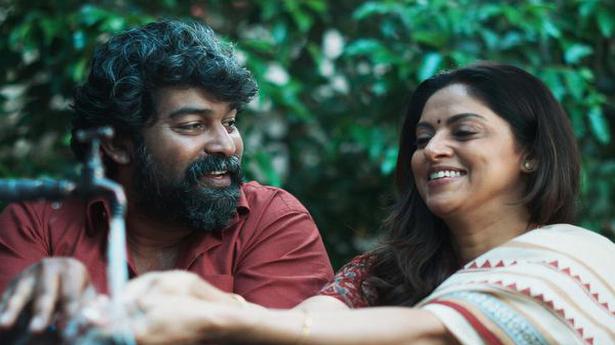 How love blossoms between two young cops as they help another younger couple during a lockdown.

This is the one-line story of Balaji Mohan’s Mugakavasa Mutham. Romance is Balaji’s strong suit. He does not over-sweeten it, but keeps it light with his characteristic humour. But, despite the jokes, the emotions of the characters (at least the main characters) in his films do not seem frivolous.

However, the short feels cloyingly cute and painfully generic. For example, we get to know that Kuyili (Gouri G. Kishan as a junior cop) is a nice person because every time she sees an ambulance, she immediately mutters a prayer.

The roughly 25-minute film spends half its time showing the everyday travails of cops and other frontline workers during the pandemic. Or at least that is what it intends to show. For instance, Murugan (Teejay Arunasalam as the other junior cop) flings his lathi in frustration and says, “What a thankless job!” when two people in a car argue with him for not letting them roam free. But at no other point in the movie do we see him or Kuyili or the other frontline workers in a stressful situation. They hardly look weary and mostly seem to have a good time, joking and laughing.

Even the plot of the other young couple feels trivial. The boy wants to meet the girl, who is going to get forcefully married by her parents. But we do not feel their desperation to meet each other. Hence, we do not get why Murugan, Kuyili, and a couple of other frontline health workers, abandon their duty to unite the couple.

Because this is a ‘feel-good anthology’, we get a fairytale ending with a kiss covered in surgical masks (because, well, the title is… Get it? Get it?)

Loners begins with Nallathangaal (Lijomol Jose) getting an unexpected food delivery. Turns out that her ex-boyfriend has ordered the food to her place by mistake. He sends an apologetic voice-note, requesting her to eat the food as the delivery agent will not take it back. The break-up gash is still fresh for Nallathangaal. As she hears his voice, she recalls her good memories with him, which wallop her back into the land of pain. She hate-eats the food even as she breaks down.

A few moments later, however, we see her attending an online wedding, decked up in a saree. But when the camera shows her location, we see that she has just draped the saree over her pyjamas. It is an evocative image that conveys the stark contrast in the lives we lead online and offline. There is more such social commentary and observation in Haleetha Shameem’s short. For example, the consumerist culture-driven toxic positivity, our strange ease in sharing our difficult feelings with strangers, and how lockdown has made it hard for us to grieve. But most of these are said rather than shown.

After the wedding, where Nallathangaal meets Dheeran (Arjun Das), the short becomes a series of conversations between them. Though there are a few occasions when one feels like Halitha is forcing lines of social commentary through Nallathangaal, Lijomol and Arjun’s performance keep things organic. Halitha’s story of two broken people helping fix each other finds the right balance of melancholy and sweetness.

Mouname Paarvayaai is the opening line of a song from the Anbe Sivam soundtrack that did not make it to the film. The song is about a couple in love, and talks about how they speak in silence. Words are not necessary for communicating with each other; their eyes are enough.

Madhumita’s Mouname Paarvayaai wonderfully subverts this romantic song. In her story, too, the couple do not use words. But the silence here is not sweet. It is a disconcerting-yet-familiar silence that indicates a fractured relationship. For instance, Murali (Joju George) just clears his throat to ask his wife, Yashoda (Nadiya), for his morning coffee. She, meanwhile, writes on a black board the list of groceries he needs to get.

Even the little pleasures of life are amiss in their household because of their strained relationship. There’s a scene where Yashoda smiles after sipping a coffee she brews for herself, but it is momentary. Murali rings the calling bell to convey that he is stepping out for groceries.

Through a poetic flashback, Madhumita shows how the music in their marriage is suddenly silenced. Joju George and Nadiya are fantastic as a middle-aged couple who are in the midst of an estranged marriage, and their subtle expressions convey a range of emotions. The story is also about how a disease that required distancing between people, melts the frigid egos of a couple that kept them apart.

In the opening scene of Surya Krishna’s The Mask, we see Arjun (Sananth) speaking in hushed tones with his lover. He tries telling the person at the other end he needs more time to tell his parents about their relationship. His father is a stereotypically-strict Tamil cinema father. The mother, meanwhile, ribs him about his secret calls.

Only when we see Arjun’s partner do we realise that his relationship is more complicated than we had assumed. Just as we think this relationship would be the crux of this story, Surya introduces Velu, Arjun’s school friend, who is a gangster. And the narrative abruptly shifts into the conversation between these two friends, who are catching up after 15 years. The two plots somehow do not cohere.

The film also suffers from an inconsistency in emotional logic. For instance, in the beginning, we see Arjun casually breaking the fourth wall to joke about his life with us. But the conversation with his gangster friend gets intensely emotional. Velu tearfully reveals how the death of his beloved wife has changed him. He tells Arjun that he wants to end his life of violence and get a respectable job that will make his son feel proud of him. This, somehow, inspires Arjun to reveal his relationship to his parents. The idea perhaps sounded interesting on paper. But even with a rousing Kaber Vasuki song playing in the background, it falls flat on screen.

Richard Anthony ’s Nizhal Tharum Idham lies in the opposite spectrum of Balaji Mohan’s sunshiny short, Mugakavasa Mutham. It begins with the news of death and seeks to explore grief. It shows how memories and thoughts can haunt us, and how the emotional walls we build around ourselves to protect ourselves can stifle us.

The film is about intangible-yet-relatable feelings. There is not much of a plot, and there is not much happening. We see Shobi (Aishwarya Lekshmi) texting her father that she will call him later because she is busy. This is her usual reply to him. She then proceeds to cut vegetables. She cuts her finger. As she washes the blood, she receives the news of her father’s sudden demise. The rest of the film shows the healing of her fresh wounds.

Shobi initially wants to get over her father’s death as quickly as possible and get back to her everyday life. But at one point, grief hits her. Her thoughts and memories start haunting her. The grief changes how she looks at herself, her father, and life. Aishwarya superbly portrays this emotional turmoil, especially in a long take, featuring Shobi’s intensely emotional soliloquy. It is perhaps the most challenging shot for an actor in the entire anthology, but Aishwarya pulls it off superbly well.

The film’s final two shots capture the essence of this anthology.

Denial of responsibility! TechiLive.in is an automatic aggregator around the global media. All the content are available free on Internet. We have just arranged it in one platform for educational purpose only. In each content, the hyperlink to the primary source is specified. All trademarks belong to their rightful owners, all materials to their authors. If you are the owner of the content and do not want us to publish your materials on our website, please contact us by email – [email protected]. The content will be deleted within 24 hours.
anthologyArjun Dasentertainment newsEntertainment updategouri kishenHalitha ShameemHitshope
Share