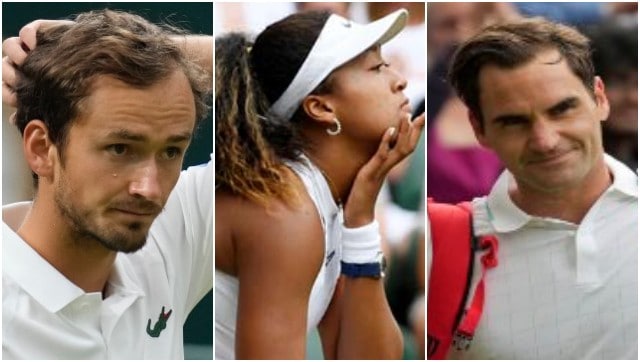 Wimbledon 2022: Who is missing from the grass court Grand Slam?-Sports News , Firstpost

Wimbledon 2022 will be devoid of Russian and Belarusian players after their players were banned by the organisers. Also notable absentees are Roger Federer and Naomi Osaka.

From left: Daniil Medvedev, Naomi Osaka and Roger Federer will miss Wimbledon that gets underway on 27 June.

Wimbledon starts next week after drawing plenty of controversy over organisers imposing a ban on Russian and Belarussian players. In response, ATP and WTA, the two governing bodies for men and women tennis players, have decided not to award any rankings points for the prestigious major.

Novak Djokovic comes in as the defending champion and the top-seed despite losing his World No 1 crown to Daniil Medvedev. The Serb is on a 21-match winning run having won the title in 2018, 2019 and 2021. There was no Wimbledon in 2020 due to the coronavirus pandemic.

Also in the fray to lift the trophy is Rafael Nadal who has made the trip to London despite a chronic foot injury. The injury flared up in the tune-up to French Open but the Spaniard was able to get past it to win a record-extending 14th Roland Garros title.

Watch: Djokovic, Nadal hit the practice courts ahead of Wimbledon

There is no defending champion on the women’s side with last year’s champion Ashleigh Barty retiring earlier in the year. Karolina Pliskova, runner up last year, sustained a hand injury in the pre-season which curtailed her start to the season. She is back in reckoning at SW19 as the sixth seed.

Local hopes will be led by Cameron Norrie and Emma Raducanu. But it is Andy Murray who is a massive question for the grass court Grand Slam. Murray made it to the final of Stuttgart, where he lost to Matteo Berrettini, before being struck down with an abdominal injury. He then pulled out of Queen’s to regain full fitness.

Raducanu, who caught the attention of the tennis world last year with a run to the final-16 last year at Wimbledon, is also a major doubt. The top-ranked British player suffered what she described as an ‘absolute freak’ injury, pulling a muscle in the first game of her opening grasscourt match of the season in Nottingham. She was eventually forced to retire after spending just 33 minutes on court.

Serena Williams, who was not on the entry list for Wimbledon, is slated to take court after being handed a wild card. She is scheduled to play doubles alongside Ons Jabeur in Eastbourne and then has entered the fray in singles at SW19.

Serena hasn’t played since last year’s Wimbledon when she slipped and fell on the baseline early in her first match. The seven-time Wimbledon champion left the court “heartbroken” because of the leg injury.

Who is missing Wimbledon 2022?

With the ban on Russian and Belarusian players, plenty of top stars are out of contention. It includes World No 1 Medvedev, World No 8 Andrey Rublev, No 22 Karen Khachanov, No 43 Aslan Karatsev (among men) and World No 6 Aryna Sabalenka, French Open semi-finalist Daria Kasatkina, former World No 1 Victoria Azarenka, Veronika Kudermetova, Ekaterina Alexandrova, Aliaksandra Sasnovich and 2016 Wimbledon quarterfinalist Anastasia Pavlyuchenkova.

Also absent is 40-year-old Roger Federer who is not fit enough to return to action just yet. The eight-time Wimbledon champion continues to recover from a knee surgery and is slated to return to court at the Laver Cup in September and is also on the list for the Basel indoor event in October.

“It was a great effort last year on one leg, and I think he’d like another Wimbledon,” Federer’s agent Tony Godsick told the London Evening Standard on the Swiss player’s chances of playing Wimbledon again. “That place has been incredibly special to him.”

Alexander Zverev, World No 2, is also not going to take court after a traumatic ankle injury against Rafael Nadal during the French Open semi-finals. The German player twisted his ankle while chasing a ball in the second set and went down in a heap in agony. He posted a photo from the hospital bed and is unlikely to take court for a couple of weeks.

Missing for a second straight year is Naomi Osaka. The Japanese player and her team indicated that the withdrawal was due to tendinitis in her left Achilles’ tendon. After her first round exit at the French Open, she had stated that in the absence of ranking points, she was leaning towards skipping the event which, in her opinion, was reduced to an “exhibition”.

Eugenie Bouchard, 2014 Wimbledon runner-up, pulled out citing lack of ranking points. The Canadian has dropped in the ranking points due to a shoulder injury and can’t be liberal with her protected ranking.

She said, “As much as I love Wimbledon, and skipping it makes me sad, using a PR [priority ranking] entry at a tournament with no ranking points doesn’t make sense.”

“I must choose wisely and use my PR entries at tournaments that will help me get back to where I want to be. I will now use my two Grand Slam PR entries for the US Open and Australian Open.”

Denial of responsibility! TechiLive.in is an automatic aggregator around the global media. All the content are available free on Internet. We have just arranged it in one platform for educational purpose only. In each content, the hyperlink to the primary source is specified. All trademarks belong to their rightful owners, all materials to their authors. If you are the owner of the content and do not want us to publish your materials on our website, please contact us by email – [email protected]. The content will be deleted within 24 hours.
CourtFirstpostGrandGrassMissingNewsnews updateSlamSports
Share

Nintendo Fan Buys $40,000 In Stock To Ask President About…

Watch: ‘Too late’ Virat Kohli gets out cheaply…